Day 23 update for the past week

William update for the past week:
I didn't see him on Saturday, but William's nurse told me his blood gasses were his best ever. They wanted CO2 below 55 and it was 49. They wanted PH over 7.25 and it was 7.31. They adjusted some settings but most things were the same.
She said they were not ready to start feeding him but Saturday they were going to start swabbing his lips/mouth with milk. My daughter was going to do his first "feeding" she said she was excited about it.

This past week they did say that they have started actually feeding him breast milk every couple of hours through the feeding tube. His nurse sounded positive over the phone. I wasn't feeling good earlier in the week and I don't want to get him sick if I am sick, so I didn't visit.

The only thing that worried me was a call from the NICU social worker who said she wanted to set up a meeting with the Drs, Nurse, her, my daughter and my wife on Thursday. She didn't sound positive at all and was even saying stuff that I didn't even think was up to date. She was saying that every time they try to wean him off of something they have to go right back up to maximum support and made it sound like they have made attempts and every time they are not making any progress/improvement.

It's true that some things have been brought back up some, but from my understanding and what I have seen and heard, the Ventilator pressure is still down and the O2% is still lower, the dopamine for his blood pressure is lower (6 from 20) and that his blood gasses and saturation has generally been good the past week, his color is better, he is content, he is gaining weight, the edema and swelling has gone down, they are starting to feed him.

Maybe I am being naive, but I think He's doing good! He's got 10+ weeks still until we get to his due date! I'm not sure what the social worker is trying to say? I wonder if there is a different expectation for a baby born 13 weeks early at 3 weeks old vs a baby born 10 weeks early? (gestation-ally the same age) as in He's 3 weeks old should he be further along? My non medical opinion would be that it would depend since 3 weeks old is different depending on when you were supposed to have been born.

On Thursday We got a full medical update:
They have been able to wean vent settings slightly
Have not had to go up.
Heart stress from blood vessels is a concern and they are still giving medicine for that.
In general his treatment will take a long time will need 02 and maybe ventilator.
He has been more alert, Less puffy. Increase sedation to keep him from over-breathing the ventilator. Still on NO2.
Feedings continue to stimulate the intestines. Will increase.
Off dopamine completely!! (this was for blood pressure)
Stopped antibiotics!!
Water pill will be given for the fluid.
Was on steroids. Went back up will do for a month. Plenty of infection risks still.
Many babies his age haven't made it. He is an exception. Praise God!
Due date up to a few months after will likely be his stay in the NICU.
Pie looks better. Praise God!
Step down to reg ventilator is possible if the lungs improve. 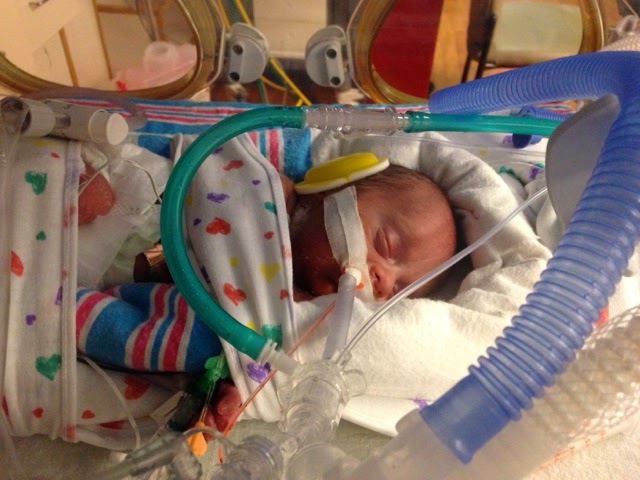