We are thankful for another day with the Warrior!

Tuesday 4AM 7/15/2014: Got an early call this morning to say they lost one of the peripheral IVs and they didn't want to wait for the PICC team and tried to put in a central line but couldn't.
He's bumped up on the priority with the PICC team. Praying for a success in getting a PICC line in and working. This is important because of all the medications he is getting and that they lost one IV.

Tuesday 9:30 AM: PICC team is there, they have consent. The Docs are still trying again with the central line. I am praying for Baby William and the Docs and the PICC team to be successful.
Go William Go!

Tuesday 12:PM: PICC line was successful. They are calling me back with more information. All I got from the nurse is that they had a "busy" morning. They said they added dopamine so I am guessing that his blood pressure needed support. This could be a result of the diuretics - and she said he had some desats and they had to go up to 100% FiO2.
I hope and pray it was because of the procedures and that he settles back down and they can better balance all the meds and focus on getting him stable, not worrying about IV lines and trying to manage all his meds through less lines than required. They said earlier they were having to stop some meds to run other things through.

Tuesday 3PM: I got the call and barely got my questions out before the doc got a call for another kid in crisis, knowing that I wouldn't want him talking to another "parent" when William needed him I told him to go, but He did say he's a little better than earlier and that's all I need to know. He mentioned the fluid and diuretics, basically I think they need to manage the fluid gain better but be careful with the blood pressure. Go William Go!

His mobile came! Amazon prime is good stuff! 4C batteries and some triple A's away from some good tunes you like WtW!!!

Tuesday 7PM: Man we had a rough night. Basically right near shift change he started desatting from low 90's(93) to the 80's and then over a half hour had drifted to 75 and hung there with 100% FiO2 on the occilator. The fellow that was on day shift stuck around for 90 min trying some vent changes and getting a full set of labs and a chest X-Ray, but nothing really showed a problem.

Tuesday 8PM: They gave him blood since his hemoglobin was on the "lower" side @ 10 something I think and after an hour or so he came up into the lower 80's but it didn't last long and he was back at 75.

Tuesday 10PM: They decided to replace dopamine with Vasopressin and start Treprostinil slowly. At some point his blood pressure was steady and they stopped the dopa and the vaso. I rested for a few hours and checked on him

Wednesday 2:30AM:  I woke up to check on him and he was in the mid to upper 70's(77,78) and I sat with him and we talked and I decided to read his favorite book (Horton hears a Who) By the time I was done reading he was satting at 84 and steady. Hey if it's this easy I will read that book 10 more times! I decided to get some more rest and let him settle. His nurse Courtney found him some music and got him set up - maybe it helped me rest as well.

Wed 6AM 7/16/2014: I woke up and took a peek and he was back to satting at 94, blood pressure good, heart rate down and looking more stable. His nurse was pleased and said that sometime @ 4AM he had crept back up into the 90's and stayed there. He was a little more stable with all his vitals so I felt comfortable leaving to go home. I hung out with him for a bit and then headed home asking them to call if anything changes.

Wed 12 Noon: William is doing about the same as he was this morning. They are slowly making changes like increasing the Treprostinil. 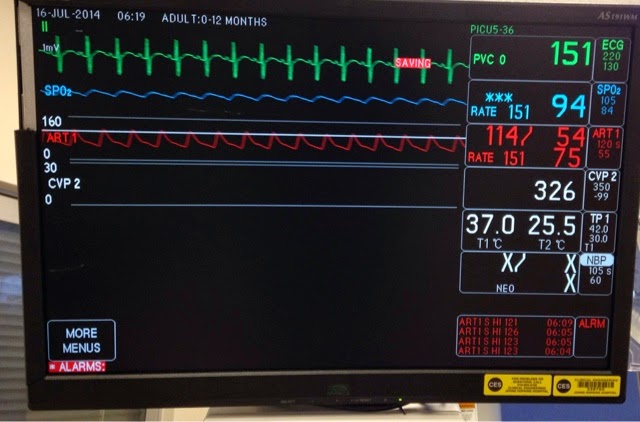 Wed 6 PM: William is as good or better then when I left him this morning. They went up on the Treprostinil and were able to wean to 95% on the FiO2!!!! 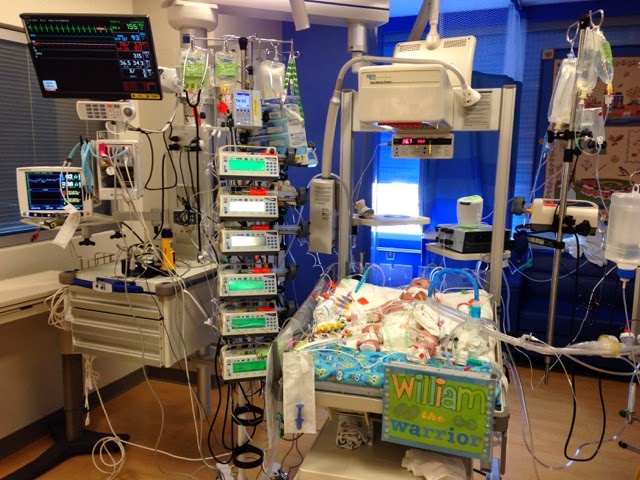 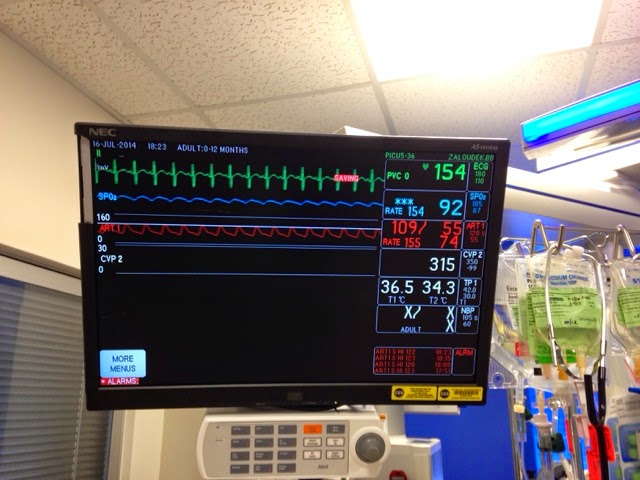 Wed 8 PM: William decided to desat a little bit into the upper 80's just as his nurse started the night with him. She didn't increase the FiO2 right away which I thought was a good thing and tried to make other adjustments. His blood pressure was a little low and he seemed to have better sats during the day when the pressure was a little higher.
They gave him a dose of albuterol and increased the Vasopressin .1, .2, .3 over time. With the albuterol he did pop back up in to the low 90's and I felt he was in good hands all around and went home for the night.

Wed 10 PM: I called and William was back to cooperating and satting in the high 90's (97) and while they did go up on the O's he was doing well enough that they might have considered weaning him again. They were coming back down on the Vaso to .2. I asked for a call if there were changes and didn't get any calls. I wouldn't say I slept great, but I slept better than the last couple of nights.


Thursday 9AM 7/17/2014: William had some trouble with blood pressure this morning after an increase in the Treprostinil. They gave some blood to keep the hemoglobin up, calcium and are doing another echo today to look at pressures and blood flows.

Thursday 12 Noon: They are planning to transition off the flolan onto the Treprostinil. They started and infusion of calcium. The hemoglobin helped. He had the echo but they didn't have results. His O2 sats were in the high 80's but they increased the fentanyl a bit and they came back up. His nurse did mention that she was able to wean the O2 back to 95%.

Since no night lately has been without some excitement, tonight was no exception - they went to change the filter on his ventilator which should only take a second or two and the filter size was wrong or the adapters were differentand then the ventilator wouldn't restart so they had to bag him by hand for a little while, He did fine with that but once the vent was restarted, it took him a little while to recover. We headed home of the night as he was coming up in the mid to high 80's for his sats.