Week 3 in the PICU

Today is Tuesday morning 7/29/2014 that I am starting this post. Today is day 126 overall and day 19 in the PICU. The past few days have been good. They have been able to come down on the FiO2 in the 65%-75% range and he was satting well. They went up on the Treprostinil from 8 to 10. Blood pressure has been stable for the most part without any medicine.
They placed a new ND tube further down into his intestines and started feeding him pedialyte at first and now formula. They had talked before about a blood clot history and there had been some difficulty in visualizing it. Apparently it is near the tip of the inferior vena cava in the right side of the heart. The concern is that if it would break free it would travel to the left side of the heart and could reach the brain and cause a stroke so they started a course of heparin to dissolve it.
There was an additional sedative medicine (pheno-something) started a few days ago and that seems to have worked well for stabalizing heart rate and oxygenation. They were talking about adding Dexmedetomidine but haven't needed it.

Wed AM 7/30 They reported a good night overall and FiO2 was down to the lowest it has been 60% They did give a 2nd dose of cidofovir and probenecid, the antiviral and the antibiotic to protect the kidneys Tuesday.
Fluid levels - Overall the past few days have been fluid negative which has reduced his weight and his appearance overall had looked better. Tuesday was the exception because of the fluid required with the cidofovir.
There was a fracture of his right collar bone that was difficult to see on the xray so the doctors are not convinced that the diagnosis is conclusive. He has had so many xrays, it's hard to imagine it was missed before but the focus of those fils was on the lungs and ET tube/ND tube placements so who knows.

The ophthalmologists gave him an eye exam Tuesday night and there are basically no issues from the ROP. He said his blood vessels are almost fully formed and no need to see him for another 4 weeks. 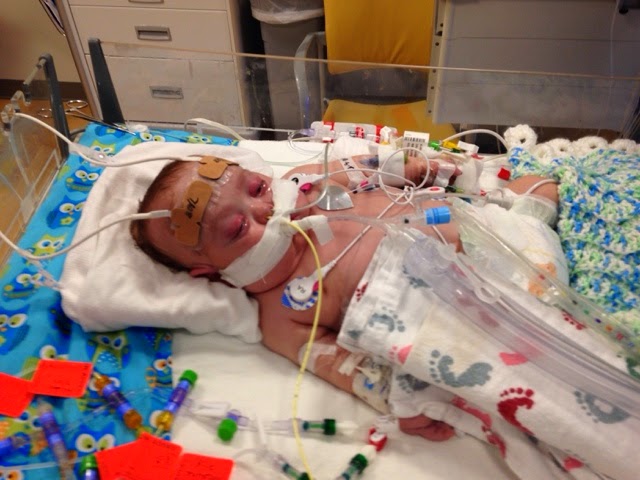 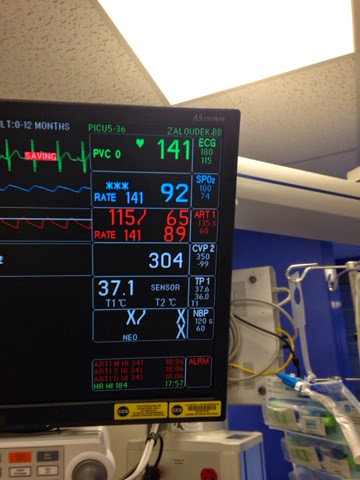 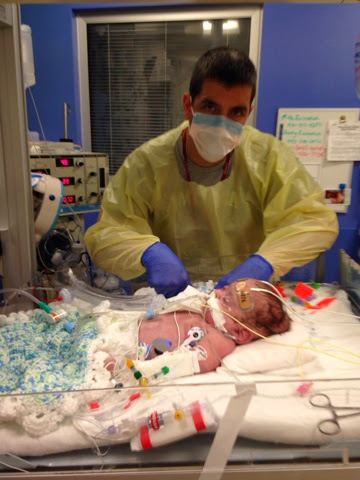 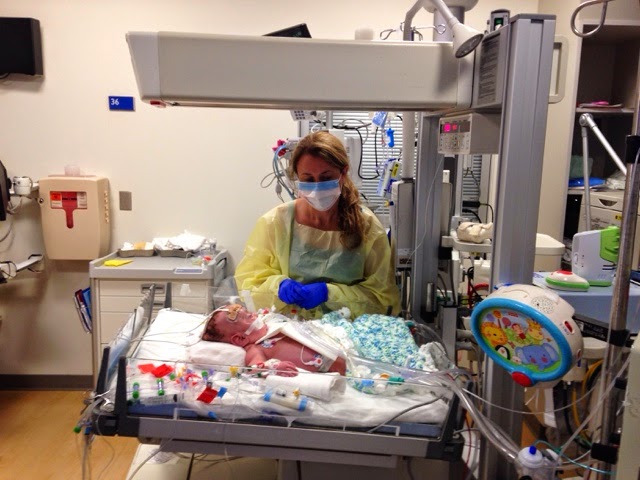 Wednesday PM update 7/30: His FiO2 was up a little bit (70-75) They had one issue with the ET tube being down too far and one lung was not inflated fully, but they repositioned and retaped the tube. You couldn't tell though. When I left he was satting 99-100!!
He was back to fluid negative ~70 for the day and looking better overall fluid wise. He was moving a little bit which Courtney his nurse said was fine as long as heartrate and blood pressure were good. I was holding a hand on his head and foot and felt him pushing his foot and moving his head a little and his eyes were kinda blinking and moving his eyelids. I could also see some movement in his torso/chest.

Thursday AM update 7/31: Doing well still - has a short blood pressure drop and bumped up on the O's but is settled back down to 60% and He is getting all his nutrition in his gut now through the ND tube - no IV nutrition. Emma is his nurse again and she said he is 1 Kilo smaller than the last time she saw him (a good thing-fluid loss)

Thursday PM update 7/31: PM Update - Today was good! FiO2 ~60 most of the day and satting in the 90's, they were able to wean some ventilator settings and blood pressure was stable, went up on the lasix, switching to lovenox from heparin.

Friday AM 8/1:  Technically this is starting the 4th week in the PICU but I'm keeping this post going. Had a good night, 1st gas was off at 7PM last night so they went back up on a wean they had done earlier. He was a little fluid positive for Thursday, but that was expected some with the feeds at the target amount. Apparently the fluid from feeds is better than the fluids from IV nutrition. Hemoglobin was 10.7 so he got some blood, not unexpected from all the blood draws for labs. Megan was his nurse.

Saturday AM 8/2: (This is week 4, but I'm editing this post still.) Pretty good night overall with Shannon his nurse. Said they went up and down on the ventilator settings currently:  MAP 21 Delta P 34 Hz 8 60% FiO2. Sats in the mid 80's. Fluid  +40 for yesterday so better than Thursday. At 3am his blood pressure and heart rate were up so they gave some PRN's.  Treprostinil was increased to 12 - I was surprised they are going to 20. Beth is his nurse again today.

Saturday PM 8/2: Courtney was back with William and when I called it was late so the details are a little hazy. They were up to 14 I believe on the treprostinil and blood pressure was still fine. He was fluid positive again so they combined 2 IV fluids that should save some fluid volume over time FiO2 was 60, sats good.

Sunday afternoon 8/3: Beth had William again today. We visited William for a few hours. He was up and down in his sats and FiO2. Sats from 73-90 and FiO2 80-60. Pastor Paul and Mrs Vicky paid William a visit. (for free) Blood pressure was a little lower today overall. Treprostinil was up to 15. Courtney is back tonight and I will call later for an update. We did take a picture: 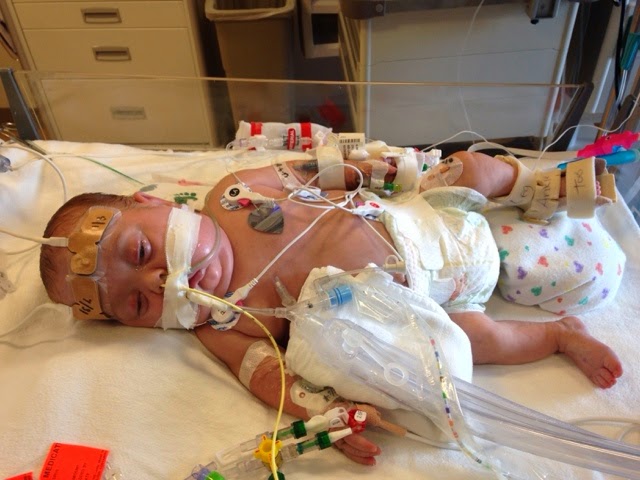 Fluid compared to a week and a half ago: 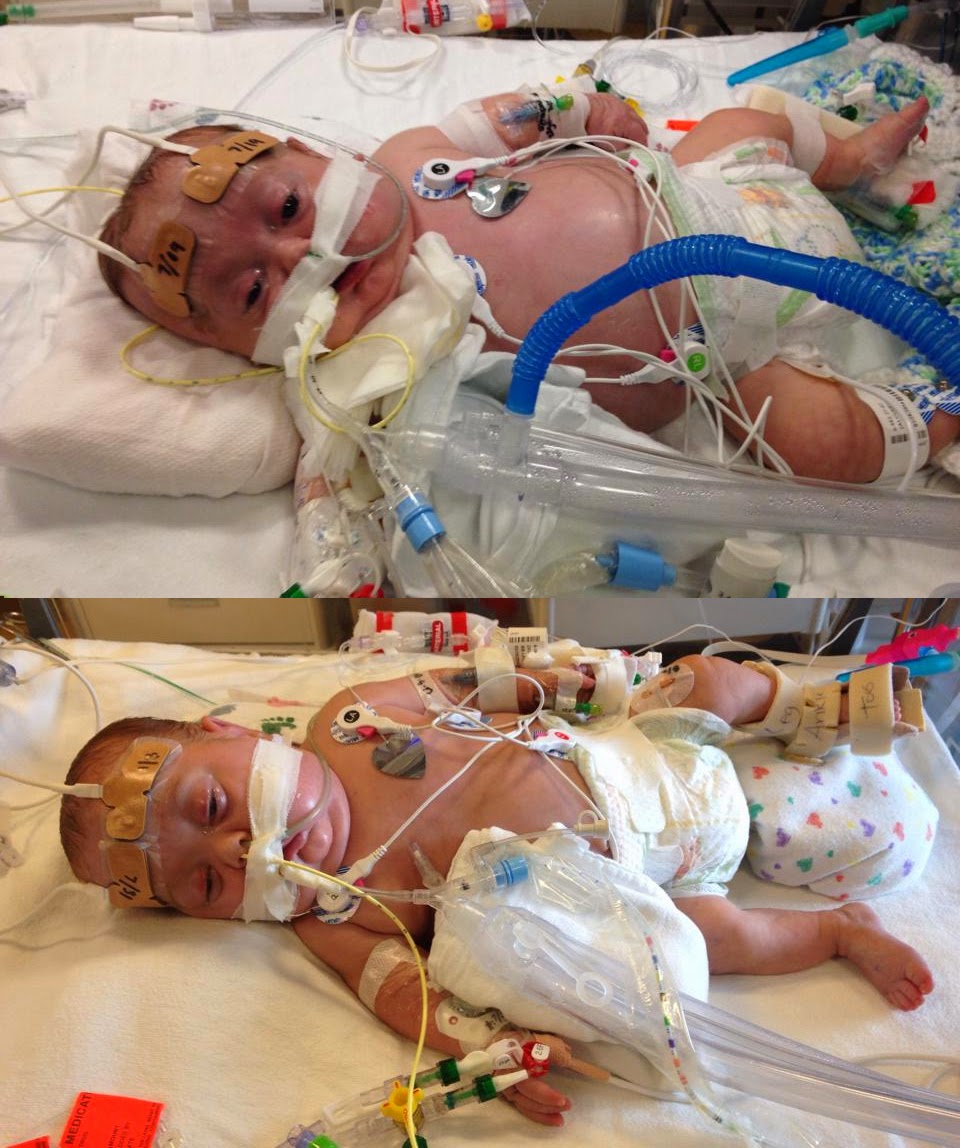