It's been a while since the last update and as usual there have been a lot of ups and downs.

9/24/2014 Towards the end of September William was having a good week and they started talking about surgeries - central line and tracheostomy tube. The question that has no clear answer is how William will tolerate the anesthesia and surgery.

The risks with the PICC line in past its lifespan is infection - something He certainly doesn't need. The PICC team already said He probably wasn't able to get another PICC line.

To me this past week or so has been worse than the previous week or two as far as oxygen requirements but the anesthesiologist didn't seem to think the risk was any greater or much more if we had timed it for that window where he was doing better. She said the risk is much higher in a patient with Pulmonary Hypertension overall.

There is the option to just do the central line, but with such a high risk of any surgery, it may not make sense to just do the line and not do the trach.

Currently they are getting ready to try him on his back with more sedation and more paralytic in order to see how he will do both for the surgery.

I stayed late and they decided not to do the tracheostomy tube but they are doing the central line. They want to see that he can tolerate 2 days on his back before doing the trach. 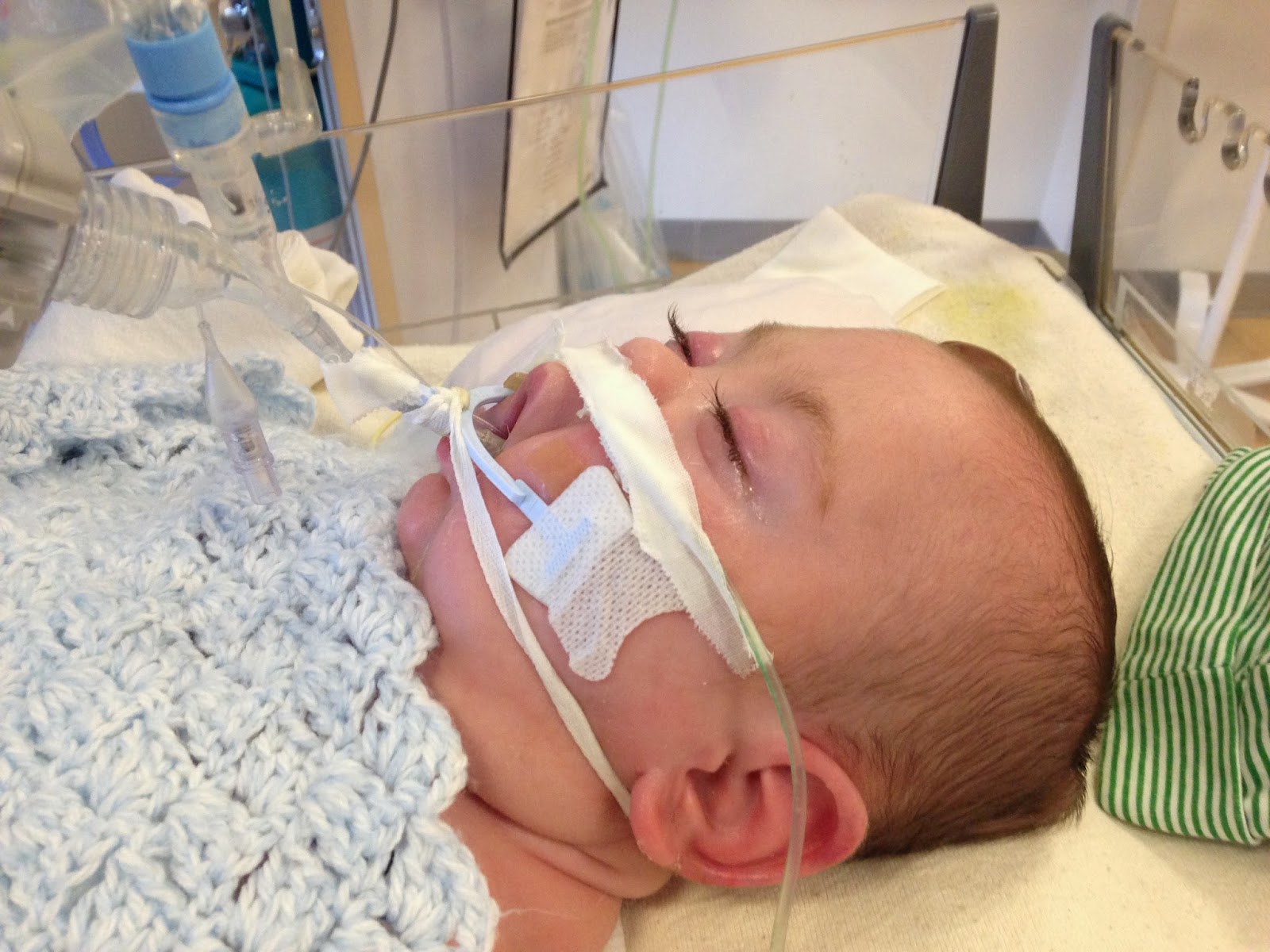 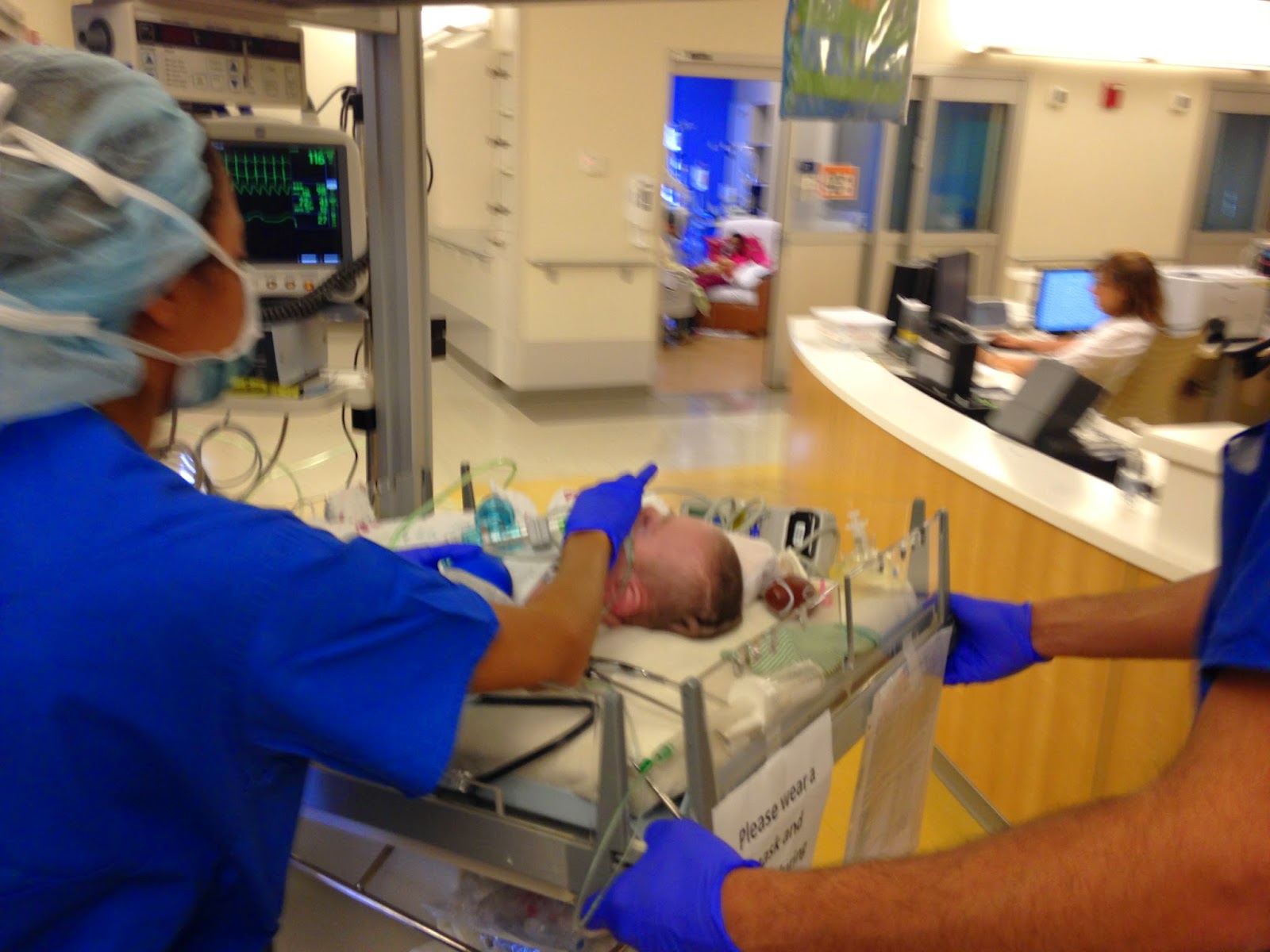 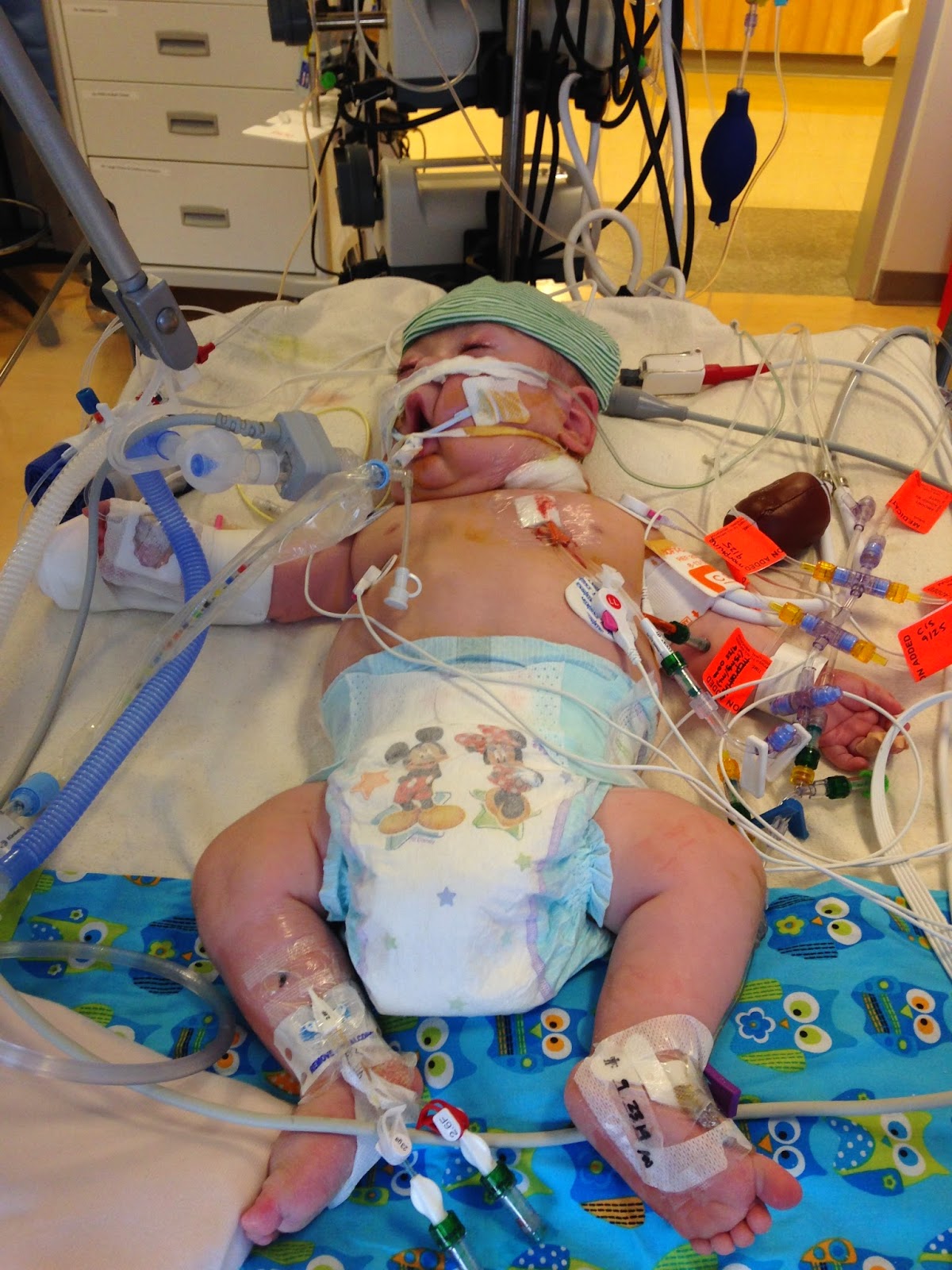 9/26/2014: At 12:45 AM William the Warrior turned 6 months old!
We have been through a lot these past months and We certainly appreciate all the support and prayers and encouragement along the way. 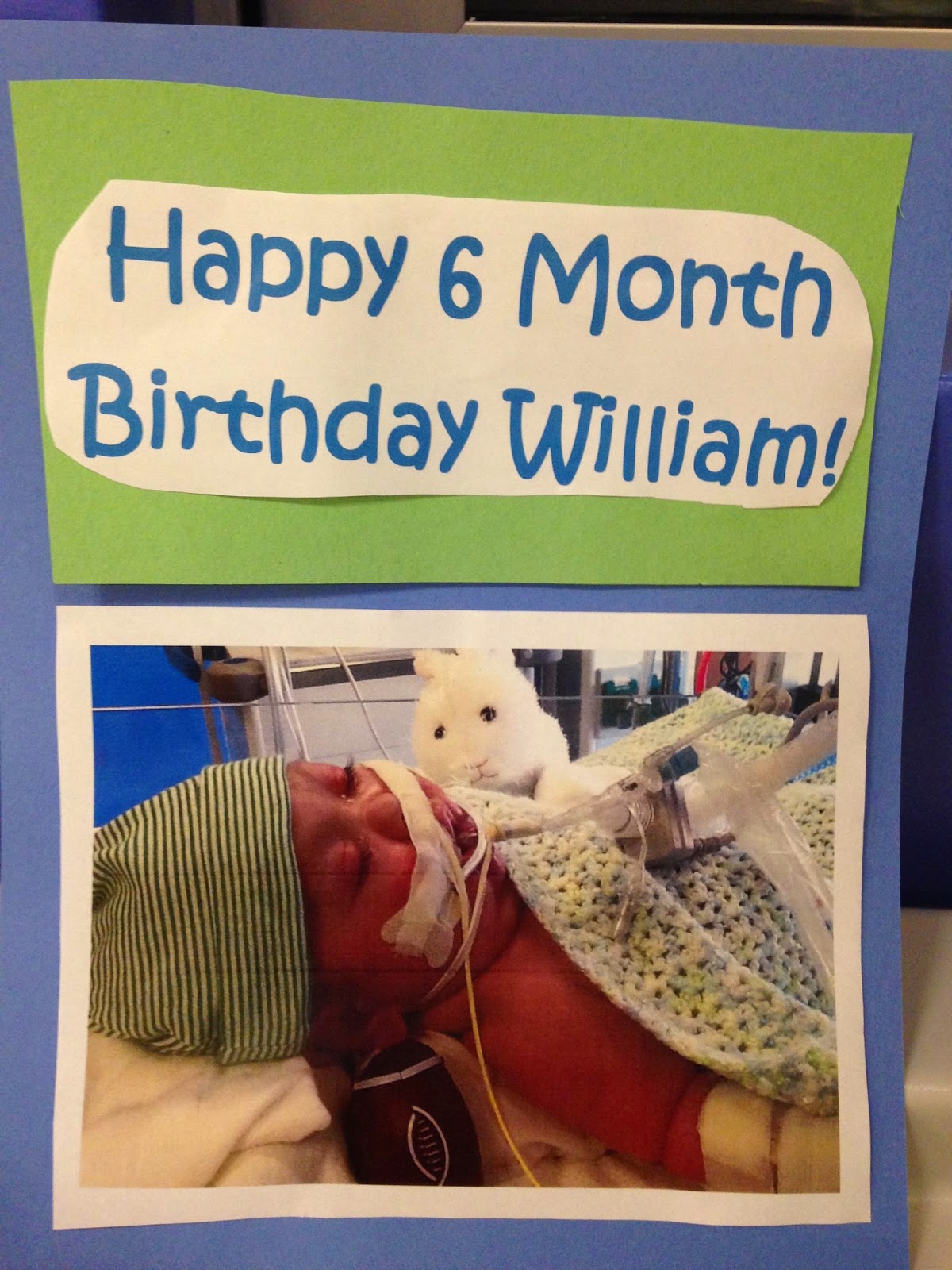 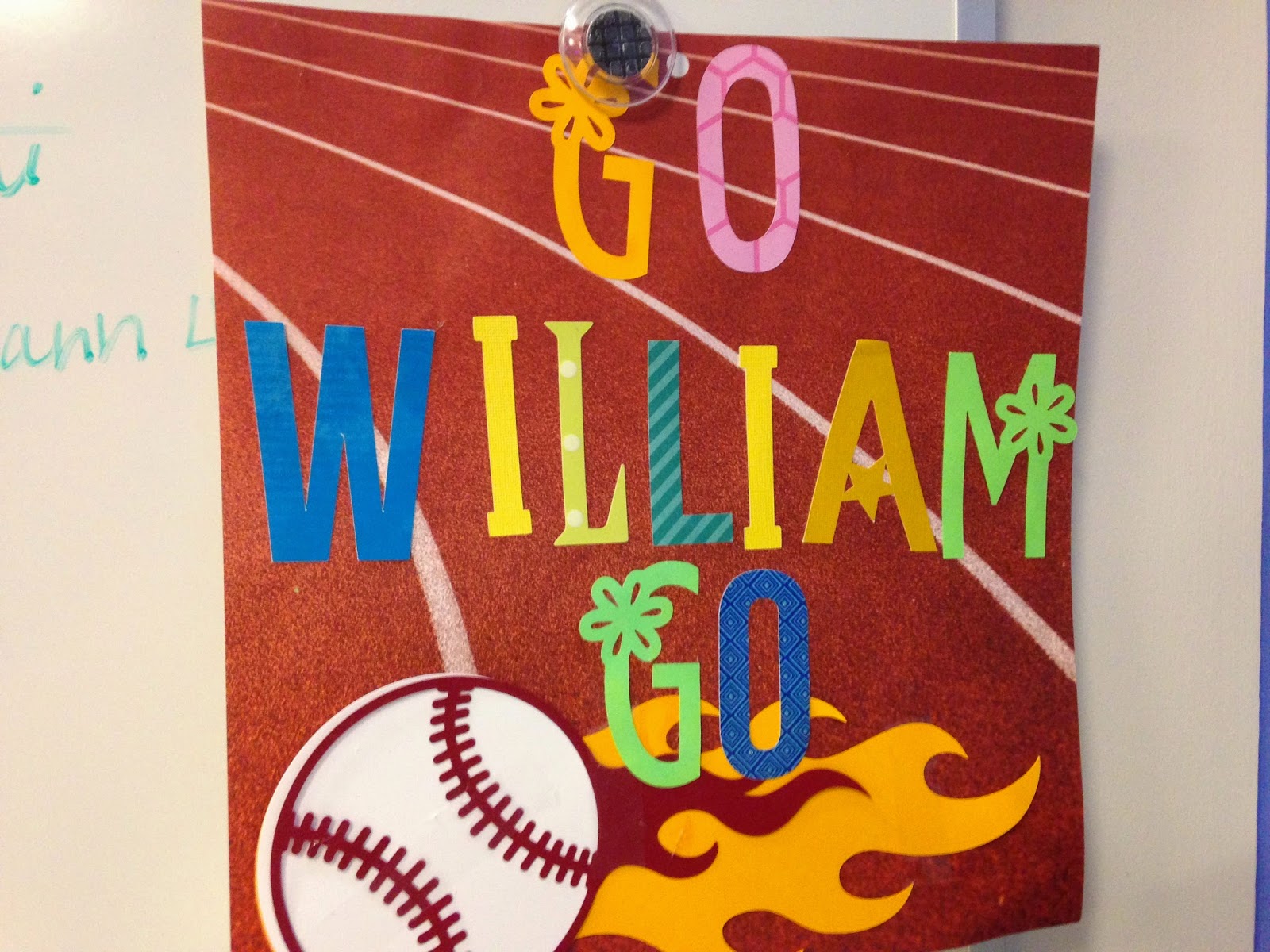 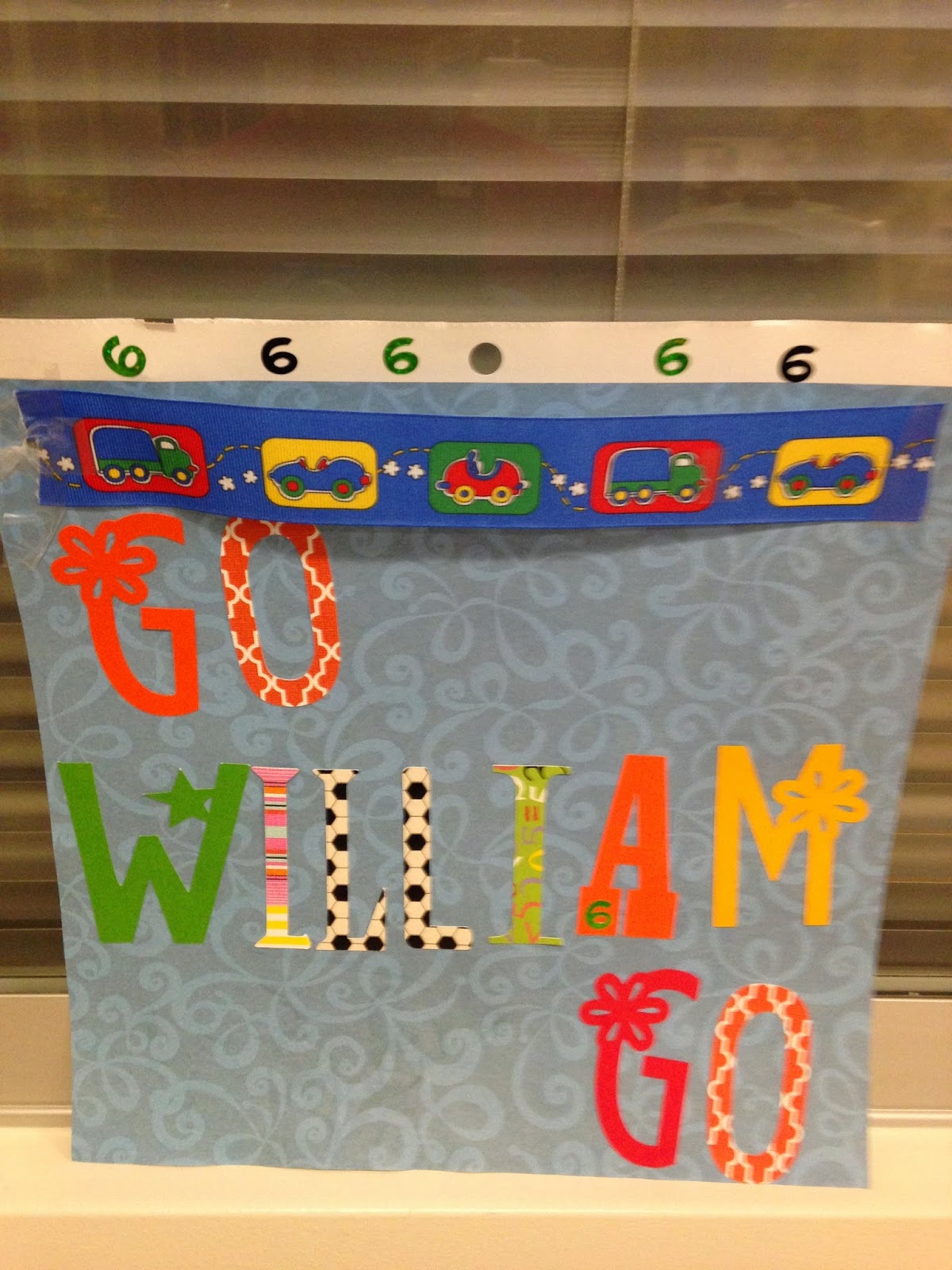 9/27/2014: William is having a good day. Patti is his nurse and she said he has been on his back since 4am and is doing great.
She took our suggestion of putting him on his side and said he loves it. His FiO2 was 50% and she said he has been there for 1.5 hours. The docs suggested weaning more but Patti didn't want to push it. I told her he really hasn't ever been to 45% before and that made her even more reluctant to wean into the "danger zone"

I'm going to try to make it up there this afternoon. They made some signs for his 1/2 birthday

9/29/2014: Well he made it 44 out of 48 hours and they had to flip him on his belly. He's been there for 4 hours and is now a happy camper. They were able to come down on the FiO2 which is a good thing. So He didn't make it the full 48 - they will probably discuss the next steps on dayshift.

He is always preferred his stomach but it just seems like he can't take being on his back very long even though the first two months that he was in the PICU he was on his back
The 48 hours was the time that he needed to be able to remain on his back before ENT would consider doing the tracheostomy tube surgery.
This is because for recovery he has to be able to spend five days on his back to recover and heal the tracheostomy tube. The problem last night was they couldn't get him out of the 70s for his saturation even on 100% oxygen.

10/1/2014: Prayer Request: William is stuck in a place where the doctors are running out of options. The past couple of days have been worse from a respiratory standpoint. He's required more oxygen and more pressures to open up his lungs. They are even talking about going back on the oscillator.

He seemed to be in a good place on Saturday when they were able to get down to 50% FiO2 on his back and 60% for a lot of the day. Since then it's been more difficult. They thing there was some collapse of certain areas of the lung and increased fluid in the lungs while on his back so they are taking some steps to deal with that. The problem is for the Tracheostomy tube He needs to recover 5 days on his back and they are concerned He won't survive it.

We meet with them Thursday and will have pulmonary there as well as ENT to discuss what little options we have. The benefits of the Tracheostomy tube should be lower pressures, lower FiO2, more comfort, less sedation, we should be able to hold him again and hopefully all that will help in contributing to less pulmonary hypertension episodes.

10/2/2014:Overnight courtney his Nurse (back from a month ago - she had him a lot) was able to wean down to 80% by 6AM after going up on some sedation (even though he didn't "look" uncomfortable) Today I just talked to his nurse and he was at 65% FiO2 Satting 98% which is awesome anytime but compared to yesterday is HUGE!! He is more sedated, they did back off on the "Cis" one of the paralytic/sedation meds. GWG! Thank you Jesus! Thanks You Docs and Nurses! 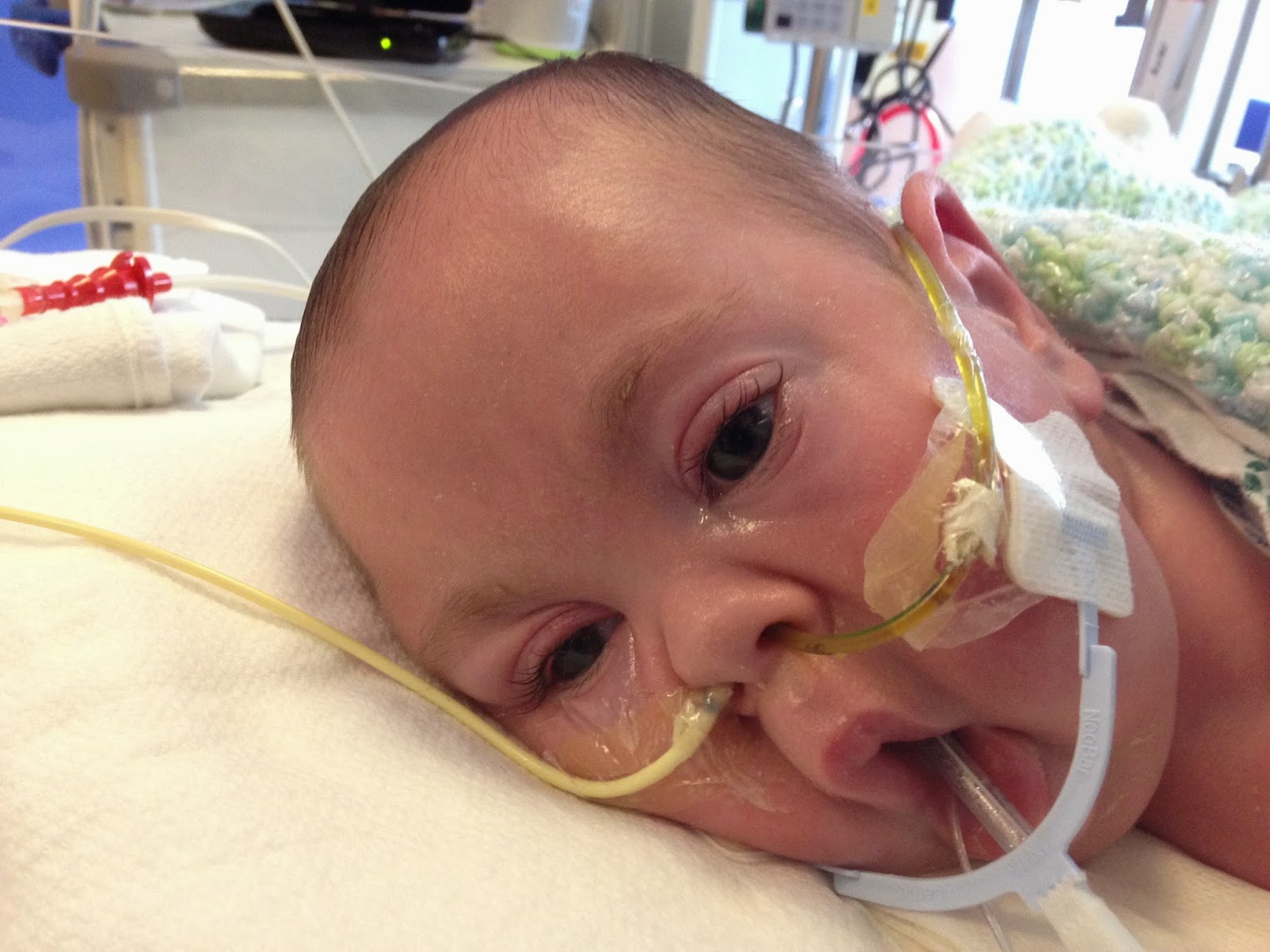 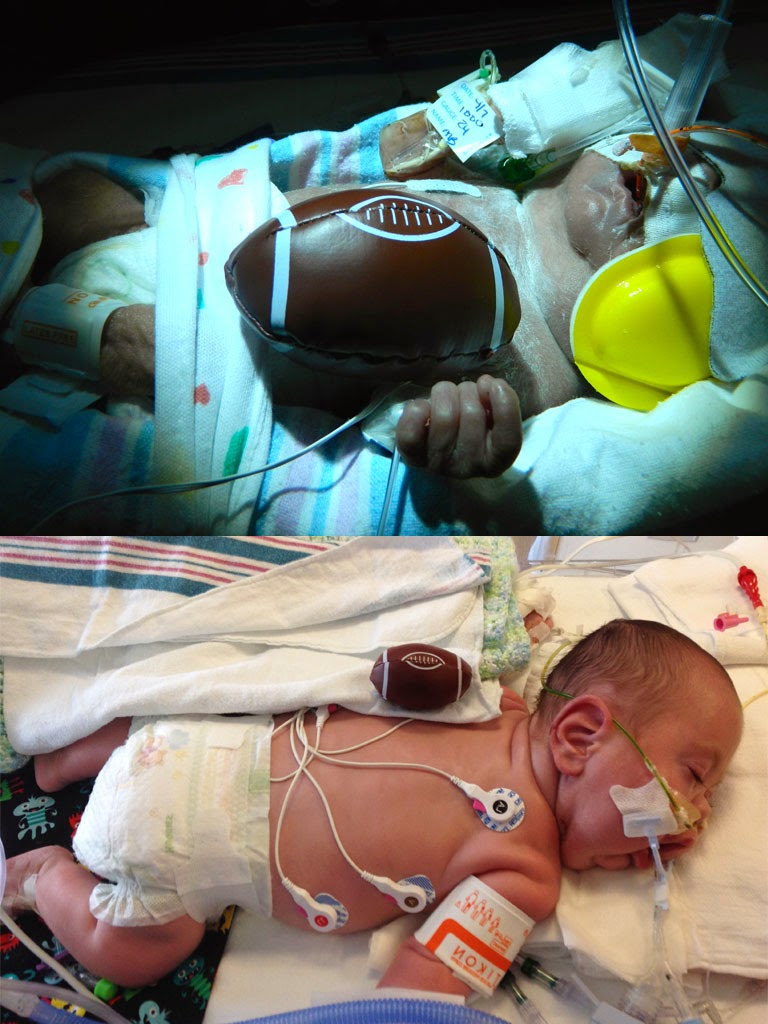 10/3/2014:  Not good news from the family meeting. Here is a basic recap of the past few weeks and the meeting:

William has been through a lot the past few weeks - They thought they were going to be able to do a tracheostomy tube and a central line, but ENT wanted him 48 hours on his back as a test to see if he could tolerate it post surgery. They did the central line and he did good under anesthesia. A few days later they tried him on his back and he made it 44 hours and they had to flip him prone. He was going up on FiO2 even with more sedation.

The thing is he is really sensitive to any movement or interaction like diaper changes, cares or moving his head to reduce breakdown/sores. The only time he has really good sats is when they take him out of it and go up on sedation and paralytic and let the machine do the work.

So basically they are saying there is nothing more they can do and ENT won't do the surgery because they don't think he will survive 5 days on his back. Now they are talking about his quality of life and that they don't see a way out of this for him and to keep him heavily sedated and paralyzed is not a quality life.

It's hard to take this news - especially when I called just now and he's satting 96 @ 70% FiO2. On one level it seems like he is doing great certainly compared to the past couple of days. They haven't given any PRN's and he even tolerated a head turn without increasing his O's.

Even though they were saying He's heading in the wrong direction, I did ask what he could do to change their minds and the answer was basically get his oxygen requirements down and stop having desat episodes from minor moving and cares.

My prayer is: Thank you heavenly Father for sending your Son to die on the cross for William and for all of us. Thank you for William and the blessings and joy he has been to our family and everyone here pulling for him to get better. Thank you for every day with him. I pray for your will to be done. So far your will has been to protect William and I pray for that to continue. I pray for healing of William's lungs Lord, better oxygenation and comfort for him. I pray for the pulmonary hypertension to get better and respond to the medications without harmful side effects. I pray that William gets stronger and can tolerate longer periods on his back so he can get the tracheostomy tube surgery and heal from it. I ask this in the name of your Son Jesus Christ, Amen.

10/6/2014: Basically for the majority of the weekend he was getting 60% oxygen and satting in the 90s. He was even tolerating most of the cares and episodes where they were turning his head or changing his diaper things that in the past have caused him the desat or get mad heart rate goes up that kind of thing

We did have a visit from the chaplain and we talked about a bunch of different things but before he left he prayed with me for William and William had an interesting reaction at the end of his prayer it's hard to describe but it was like it was like he all of a sudden got like a burst of energy and I almost thought for a second there he was actually going to get up off the bed he raised both of his arms up and moved the whole rest of his body and he's mostly been sedated pretty heavily and paralyzed so it was just interesting to see.

10/13/2014: He had a good quiet weekend - Still satting high 95-100% on 60% oxygen. They have weaned nitric I think to 1 ppm. Beth is his nurse today and she had him last 2-3 months ago when he was first in the PICU so I will be interested in her thoughts on his progress since they last met. 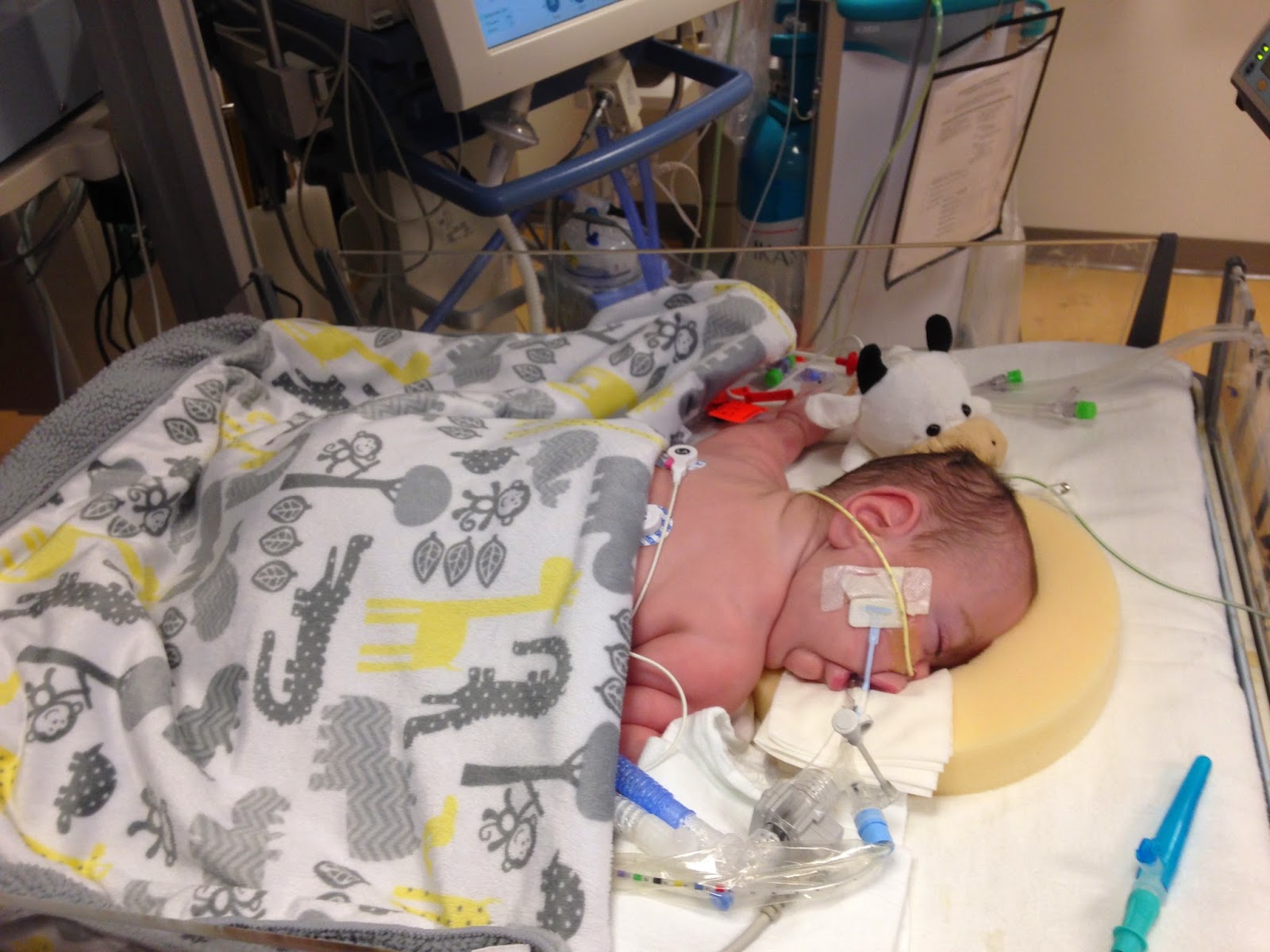 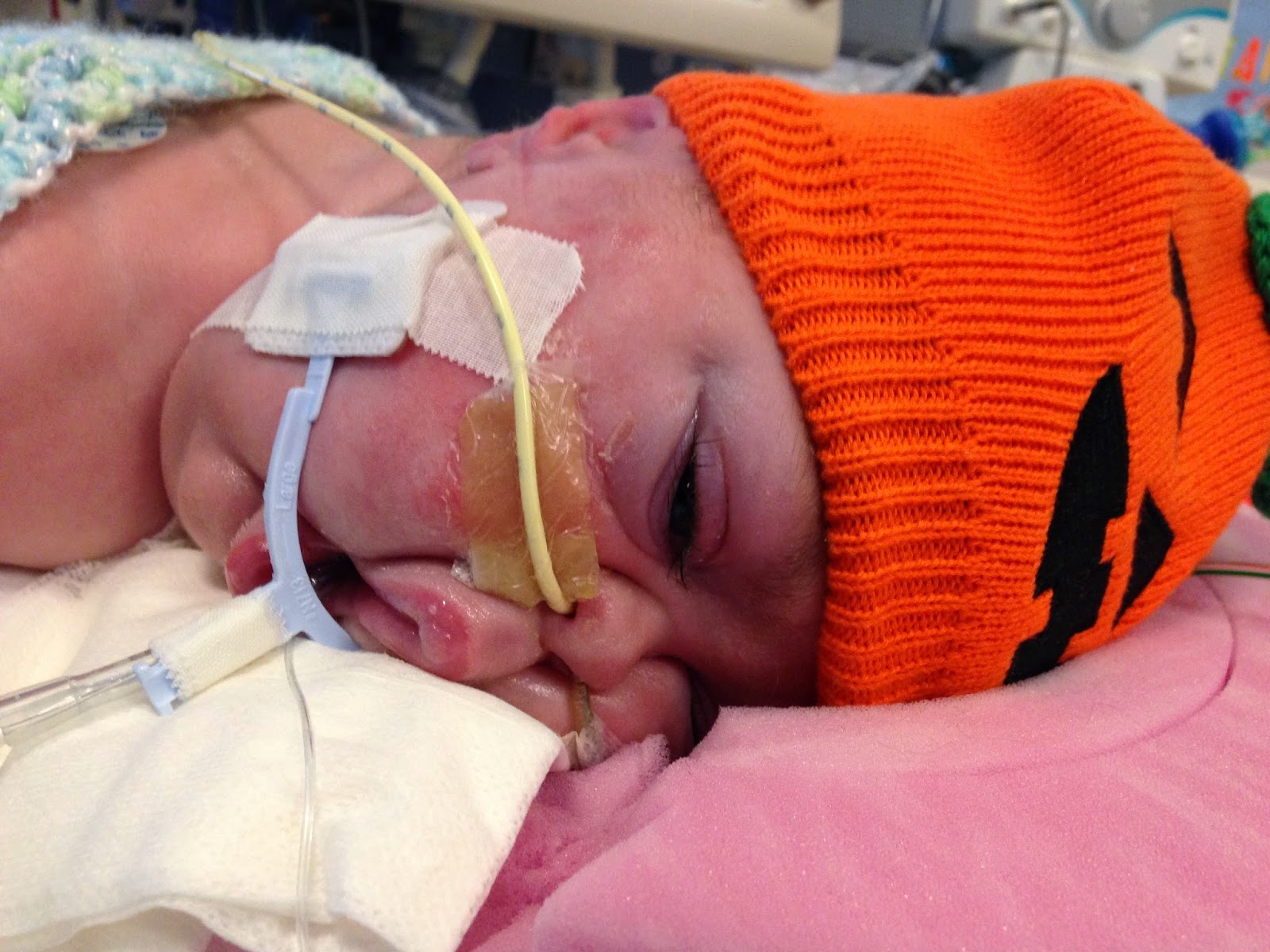