He did get his trach changed on Tuesday successfully without incident and they even have him a peds size one not the neonatal he had.

Then yesterday I had a mtg at the hospital for work so I visited him at 9:30 and he was on 95% satting low 88/90. I remembered that while it wasn't something the staff seemed thrilled about, that it was possible for him to go prone once they changed the trach. I asked his nurse about it and she Rightaway said it's not something we normally do with babies with Trachs. I asked her to bring it up during rounds anyway to see what the doctors thought about it since it basically was something they could do to prove improve his oxygenation without medicine. I felt like the reason they don't like to do it is that it's more difficult and requires more supervision and monitoring and everything else.

After my meeting I came back to find three nurses in his room with him on his belly getting situated. I stayed for about another hour and by the time I was leaving his FIO2 was down to 70 and he was satting low 90's   later that afternoon I called to check on him and his nurse mentioned that he was mostly on 60% but she'd even gotten him down into the 50s but she was like it was no big deal like forgetting that he was on 95 early this morning...

They are stopping the antibiotics after today they actually determined that there was not a blood infection but they still were treating him for tracheitis.

Today he was mostly 60 to 65% FIO2 and on his back they never felt like he needed it today to be on the stomach. 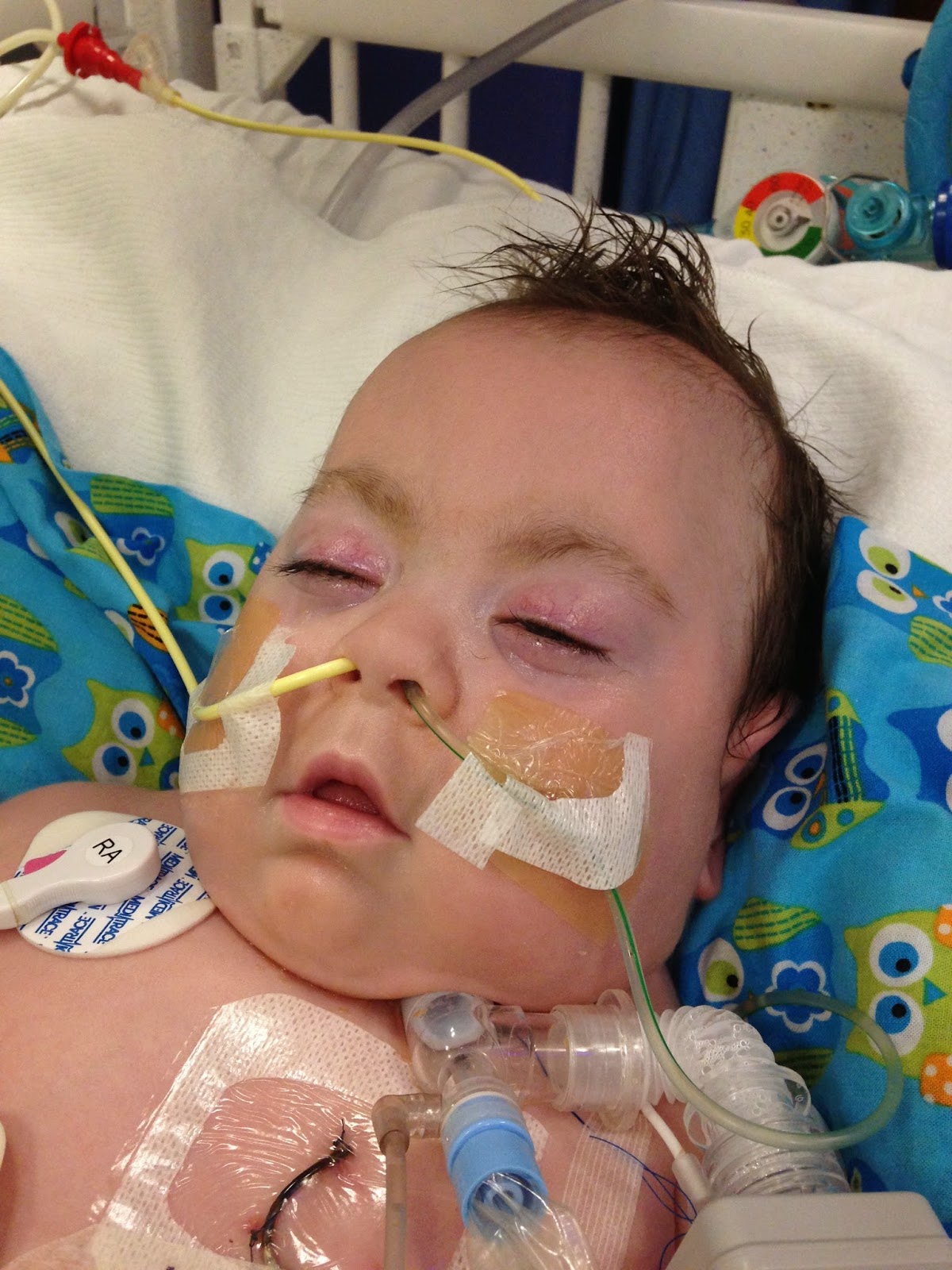 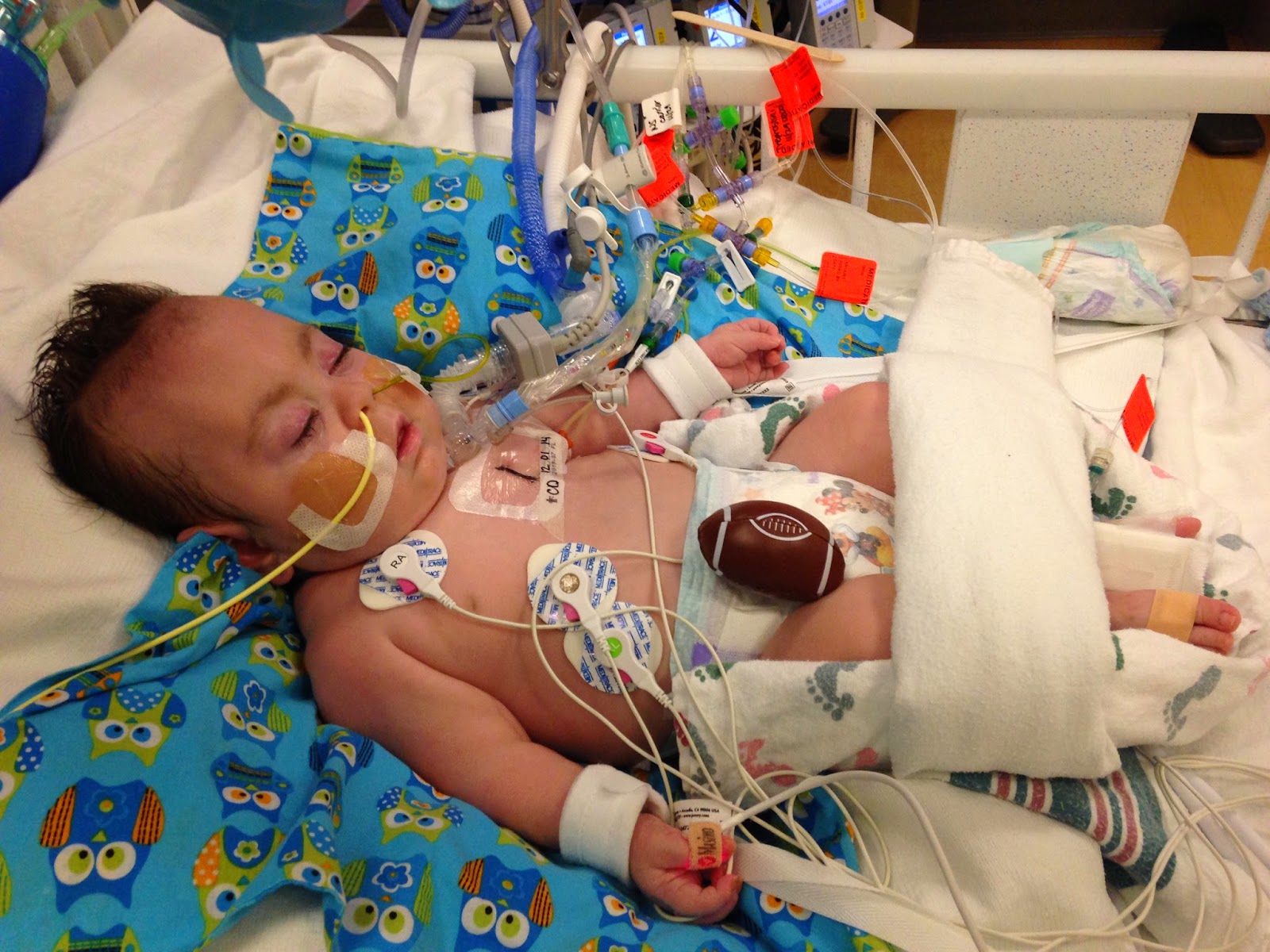 
12/11/2014:
William decided it was time to change his central line and pulled it out himself this afternoon. They were able to get 2 peripheral lines in and got all his meds started again without a lot of difficulty.
They decided to take him to the OR and place a new central line. He went @4:15. It was a bit stressful as it was not planned and he was desatting a bit into the 70's before he left and was seeming stressed.

He's back in the room. Job well done William and the staff. They used ultrasound to place this line so less scaring and incisions. Thankfully they put in the larger cuffed line. The one that can stay in a long time if needed. He is back and sleeping but was very awake for just having anesthesia. 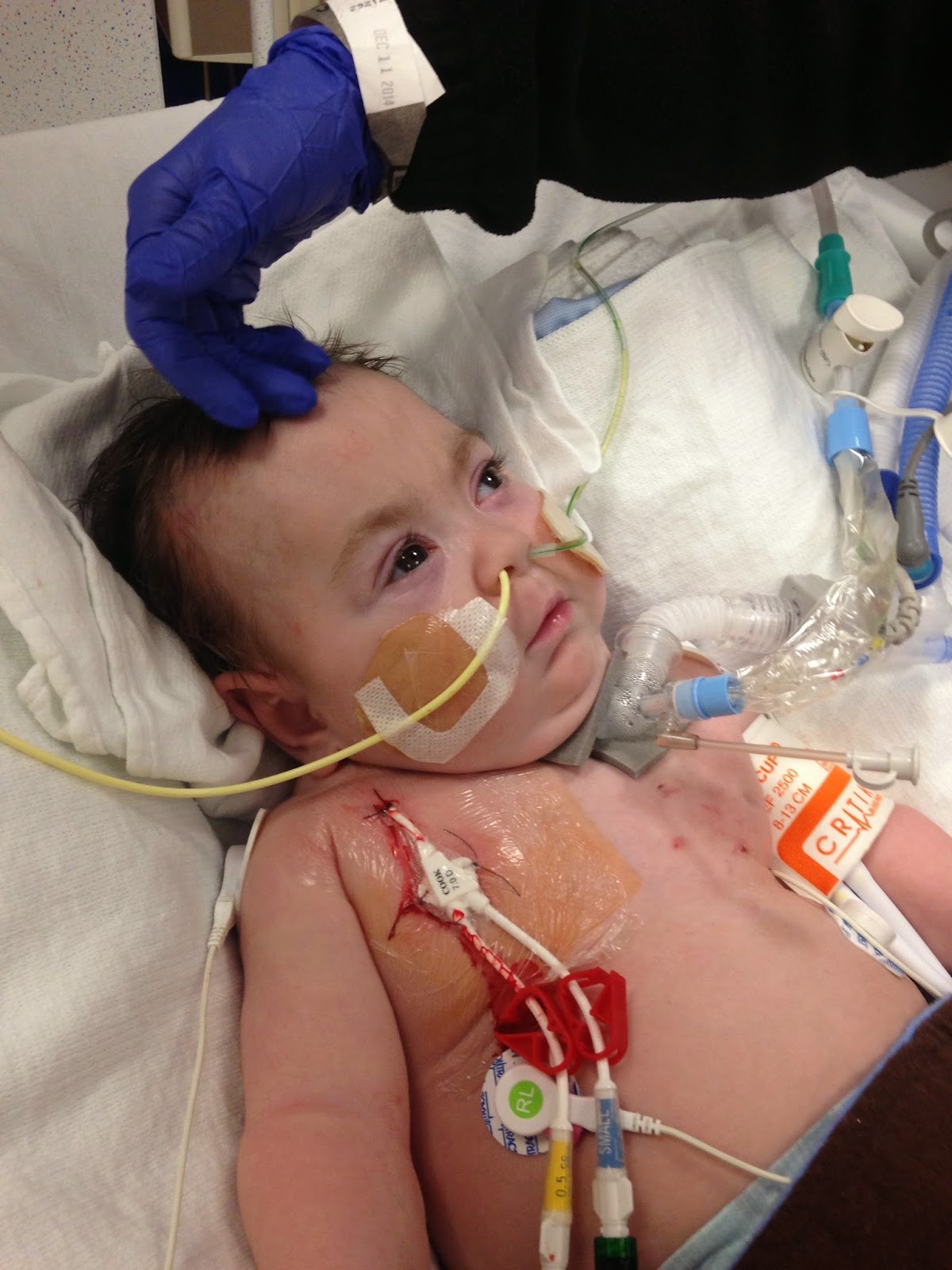 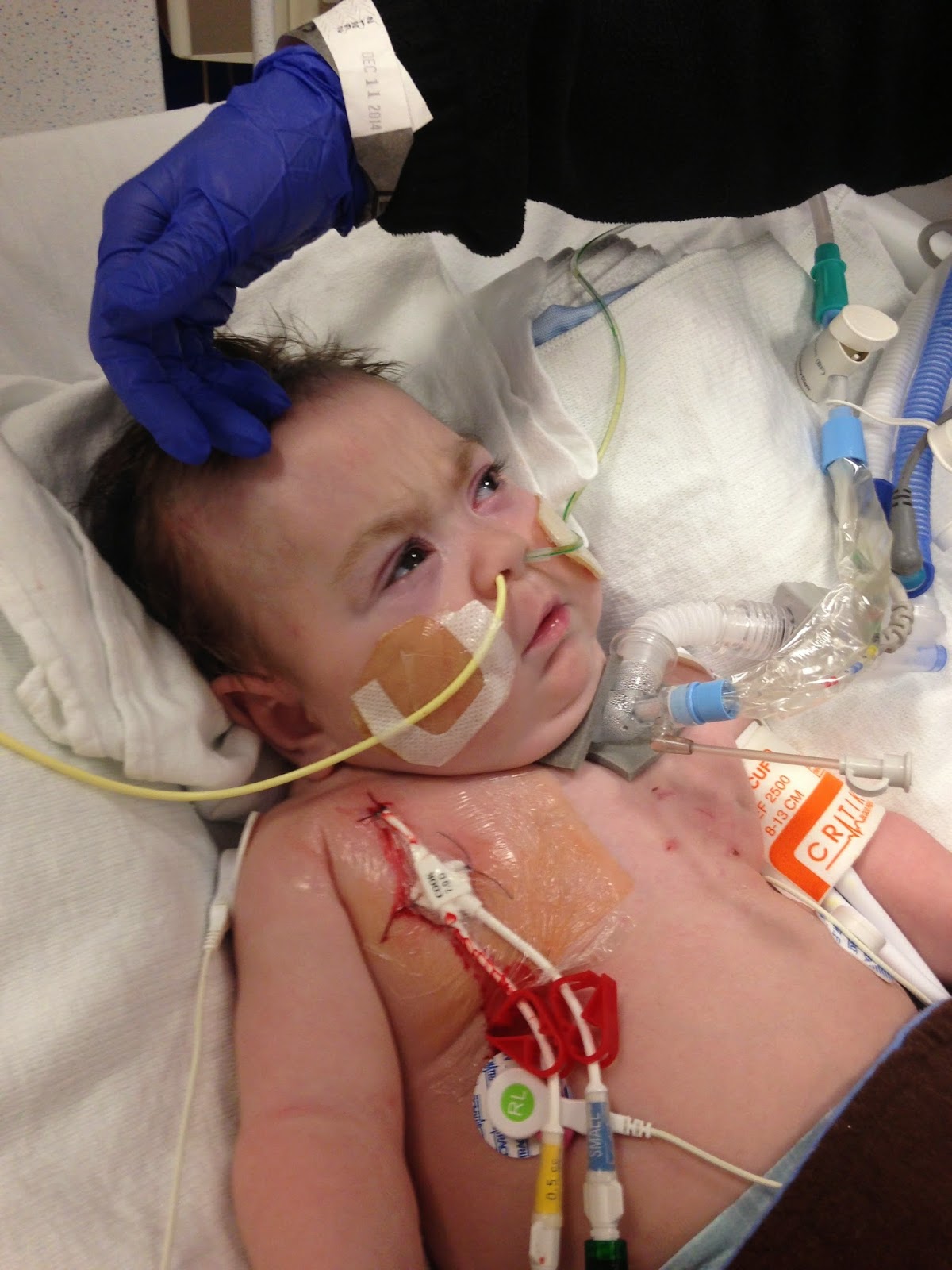 12/13/2014: There will be some ups and downs I think as they challenge him and wean things. He came off the Cis paralytic this week.

Tonight however he is having a lousy time. Fever of 105 and heart rate was in the 220's. They are doing some cultures and gave him Tylenol and ice packs. The temp is down a bit now but they have to still draw some blood and do a urine catheter which they tried twice and didn't get it. He's doing fine with all this poking and prodding so far. 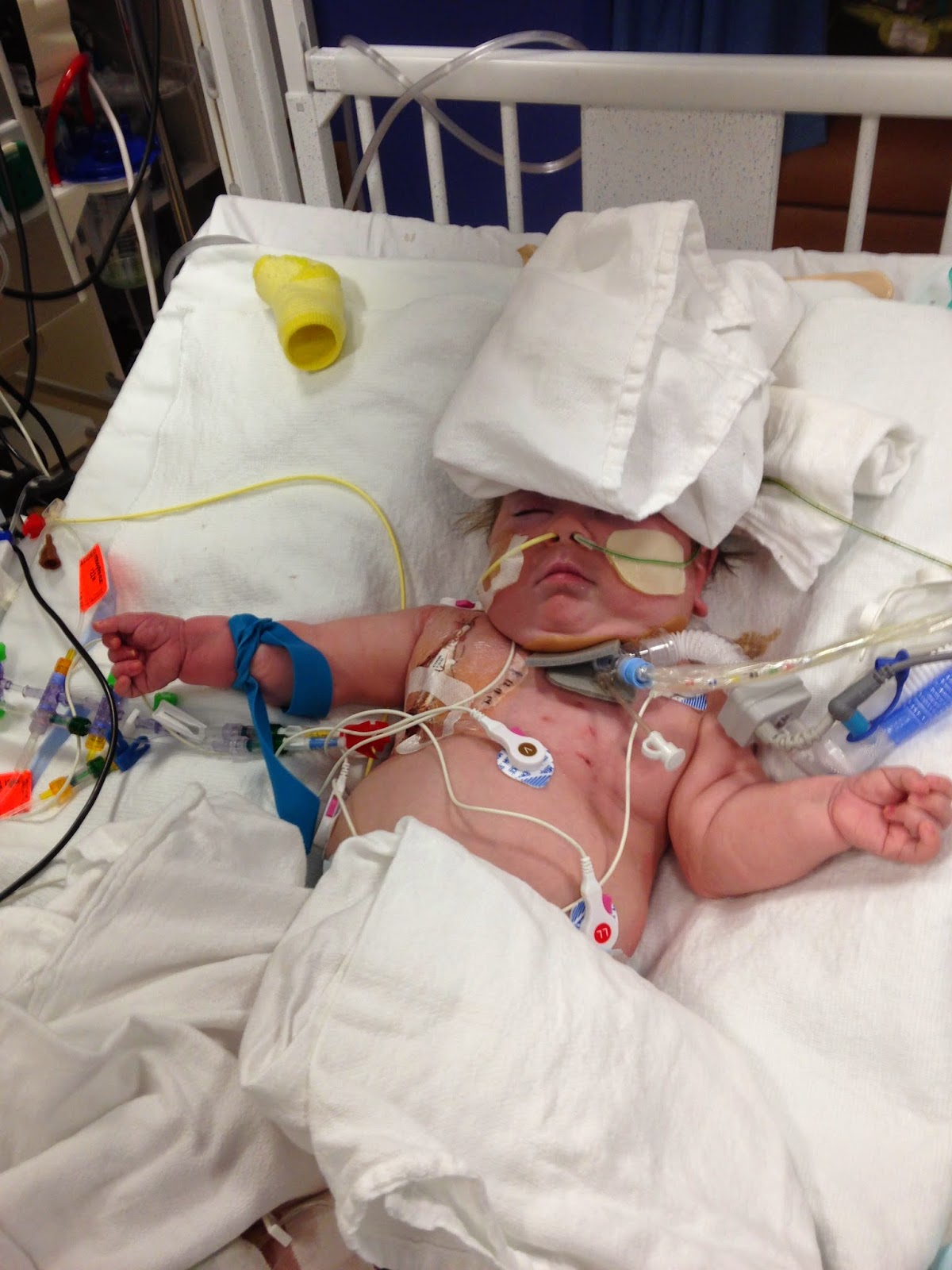 12/14/2014: We left him late last night. His HR was down to about 175 and his sats were in the upper 80s or low 90s. The plan was to put him prone. (On his belly) however when I called this morning he was still not prone they had difficulty figuring out a way to do it and he was sort of on his side which I don't think is any better than him on his back.
So we are headed back up there after a long conversation with his nurse to express my views that he should be prone unless there's a reason for him not to be prone and yet he hasn't been prone since 10 days ago or 11 days ago.
Not sure about the fever cause. They were going to do The cultures to see if he had infection.

Today I was able to hold William for the first time in 5 months!!! It was great. 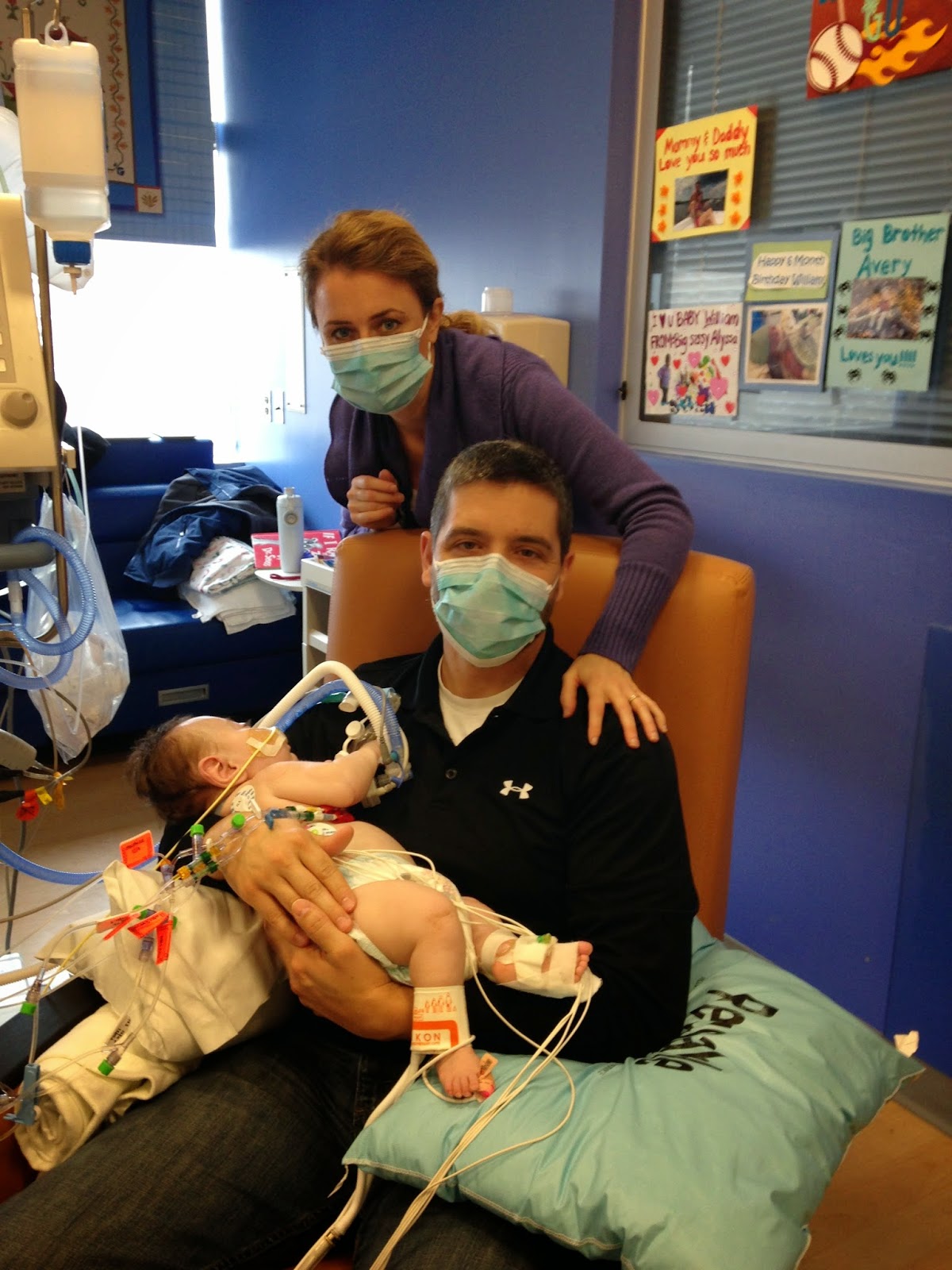 He does have a blood infection which grew back in the cultures from last night and that's the source of the fever and the high heart relate last night and agitation/higher fio2.
He is doing better than they expected for what he has going on. They actually think it came from a urinary tract infection since they did find that in the urine culture from a day or two ago

12/19/2014:He's a bit better the past day or so. They did have to go back up on some of the sedation and pain meds and the paralytic is back on.

12/22/2014:He's had the best night of the past week last night 60% FiO2 all night and HR was calm this morning. Antibiotics stopped last night.

12/24/2014:Last night I got the Christmas photo cards. I got two 2lb boxes of cookies from Vaccaro's and delivered them.

First stop was the Bayview NICU and I was feeling a little awkward stopping there with no kid to visit. You have to check in with security to even get on the labor and delivery floor. Then you get buzzed in the door to the reception area of the NICU. The lady at the desk Andrea looked at me with a look of confusion until I explained what I was doing. I ended up having a nice visit for a half hour or so. There were a number of nurses that had taken care of William there last night and a respiratory therapist.

After that I went to see William. William was doing good. His nurse Carol Ann had him down to 60% and prone. They finally seem to have a working combination of foam/pads and rolls to safely get him prone. 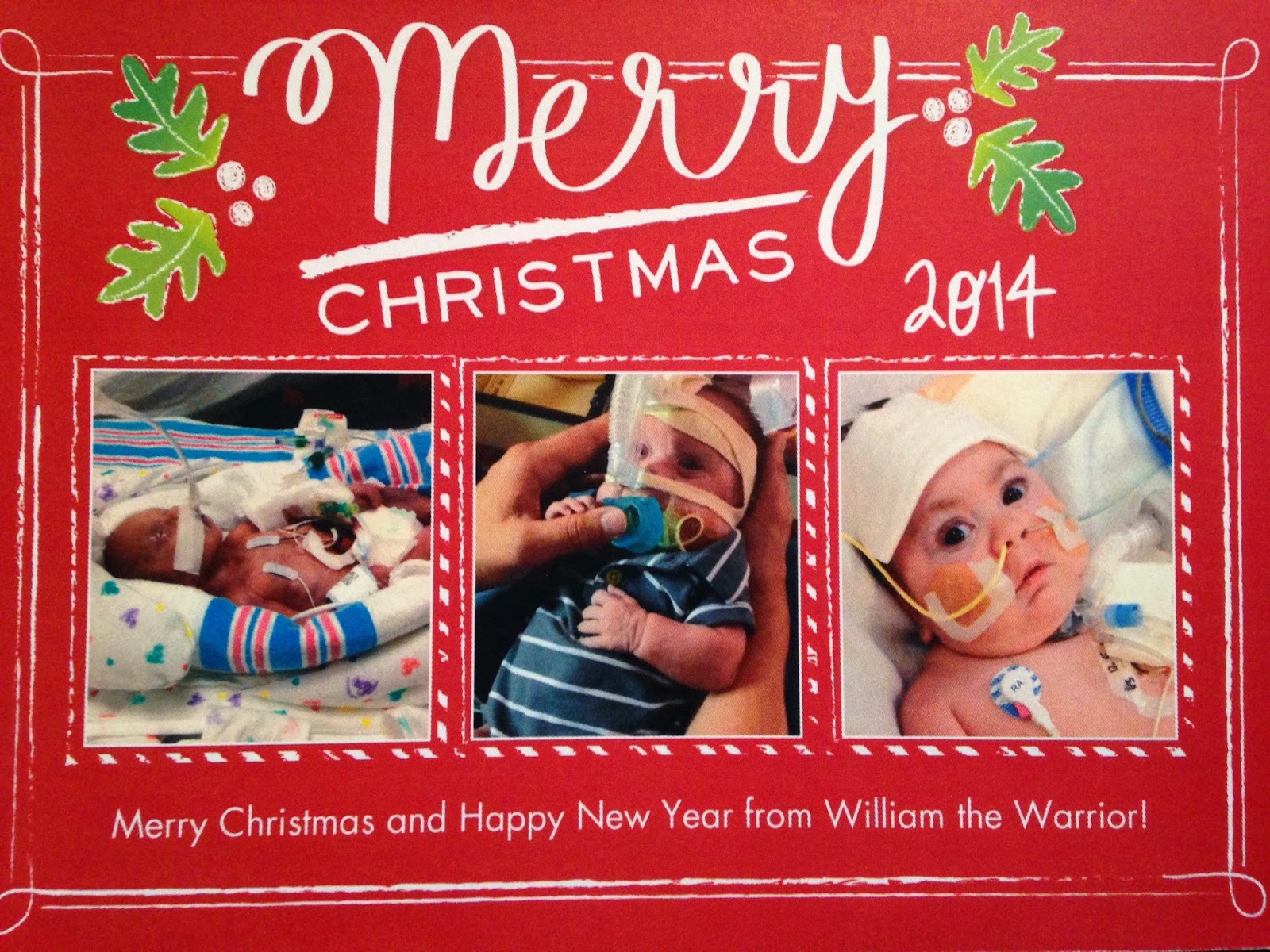 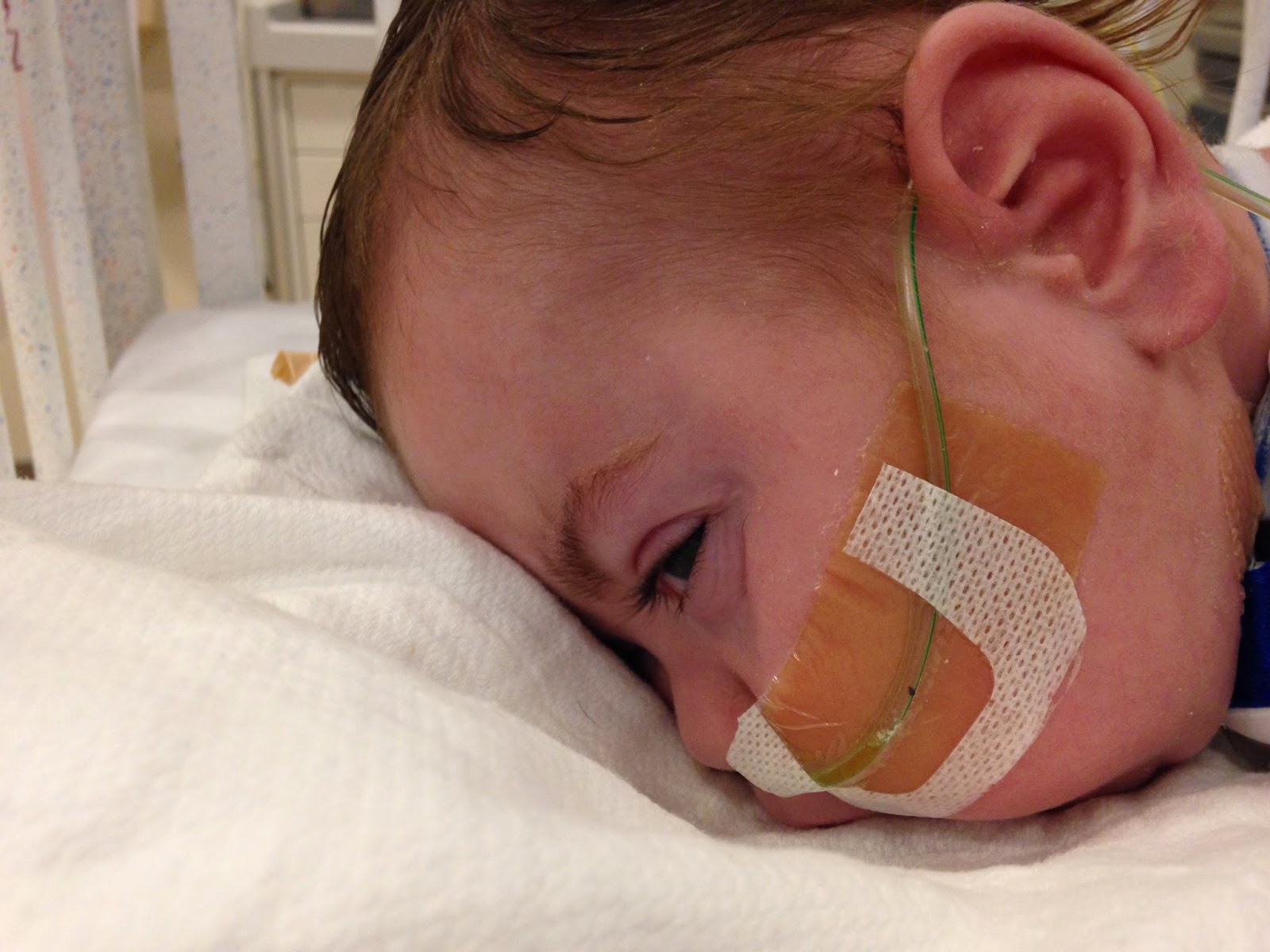 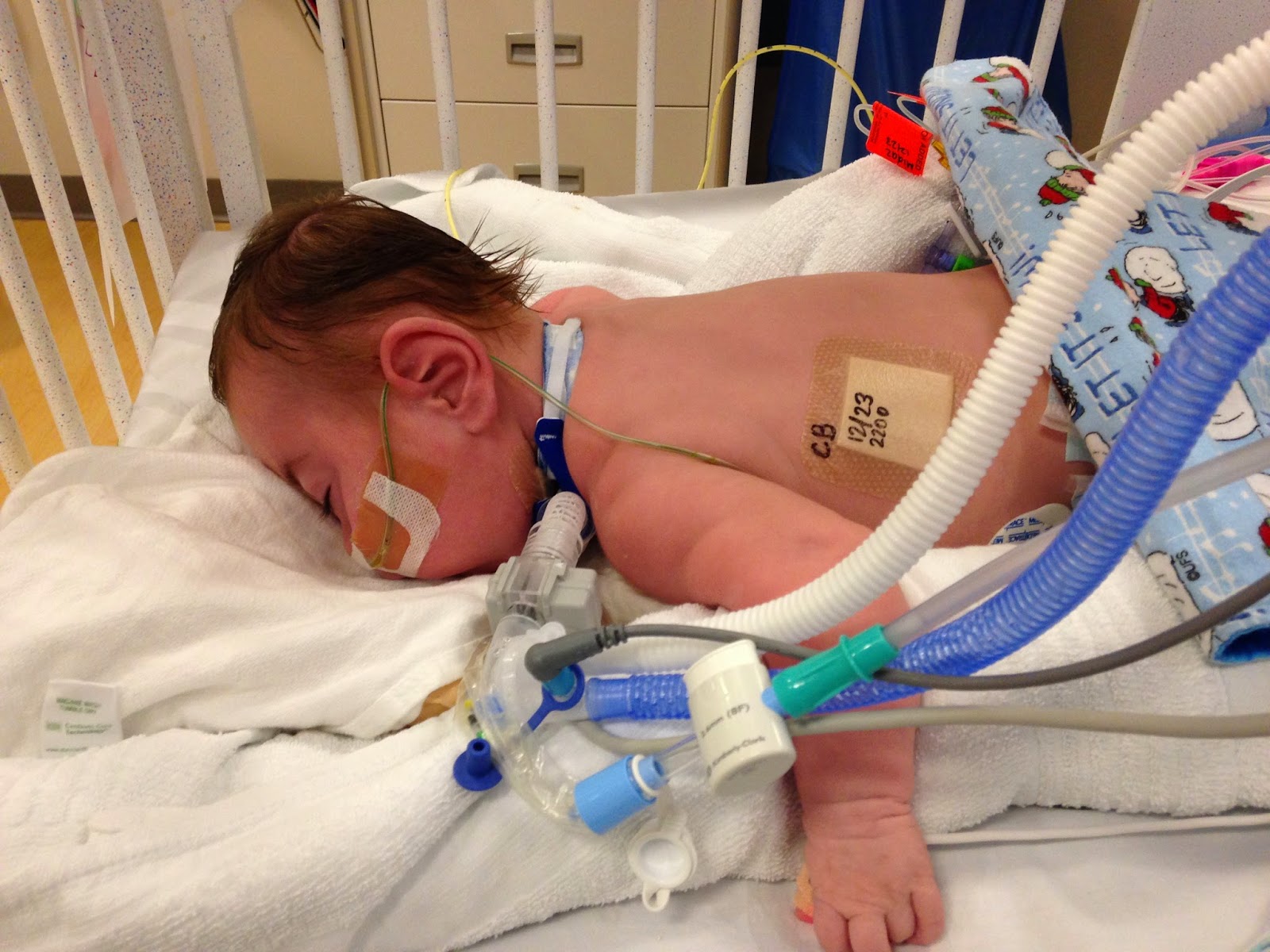 12/25/2014: Merry Christmas everyone. We stopped up last night after church and William was not satting well, but was content. His HR was good. Odd really.

He liked getting his hair combed by his Mimi. My wife got to hold William tonight. He was very awake for our visit. I think he likes mouth care 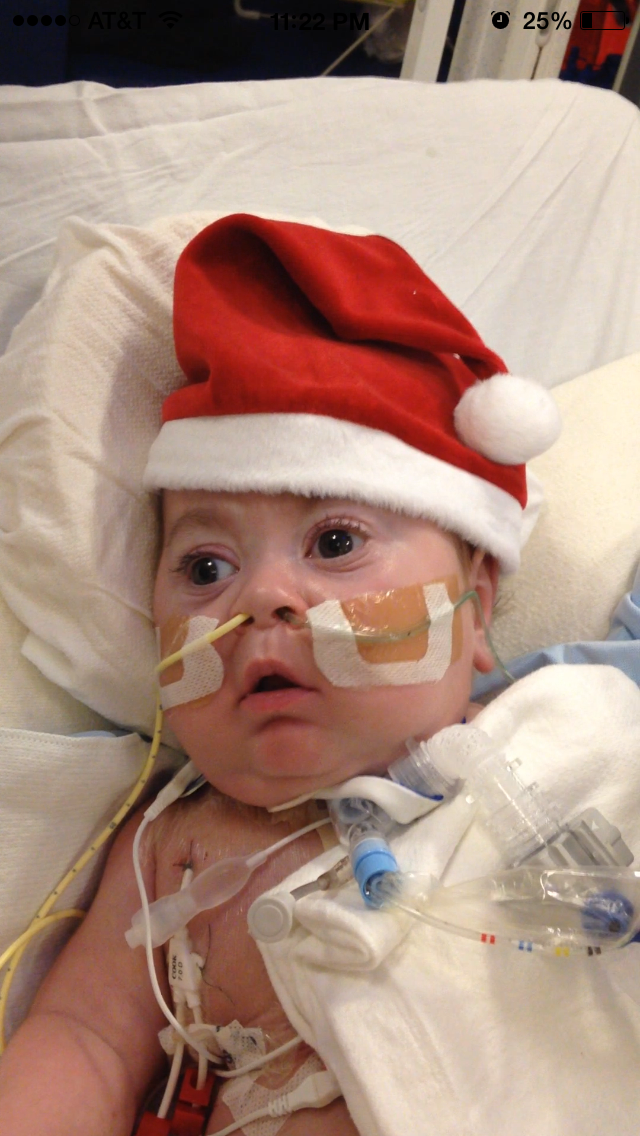 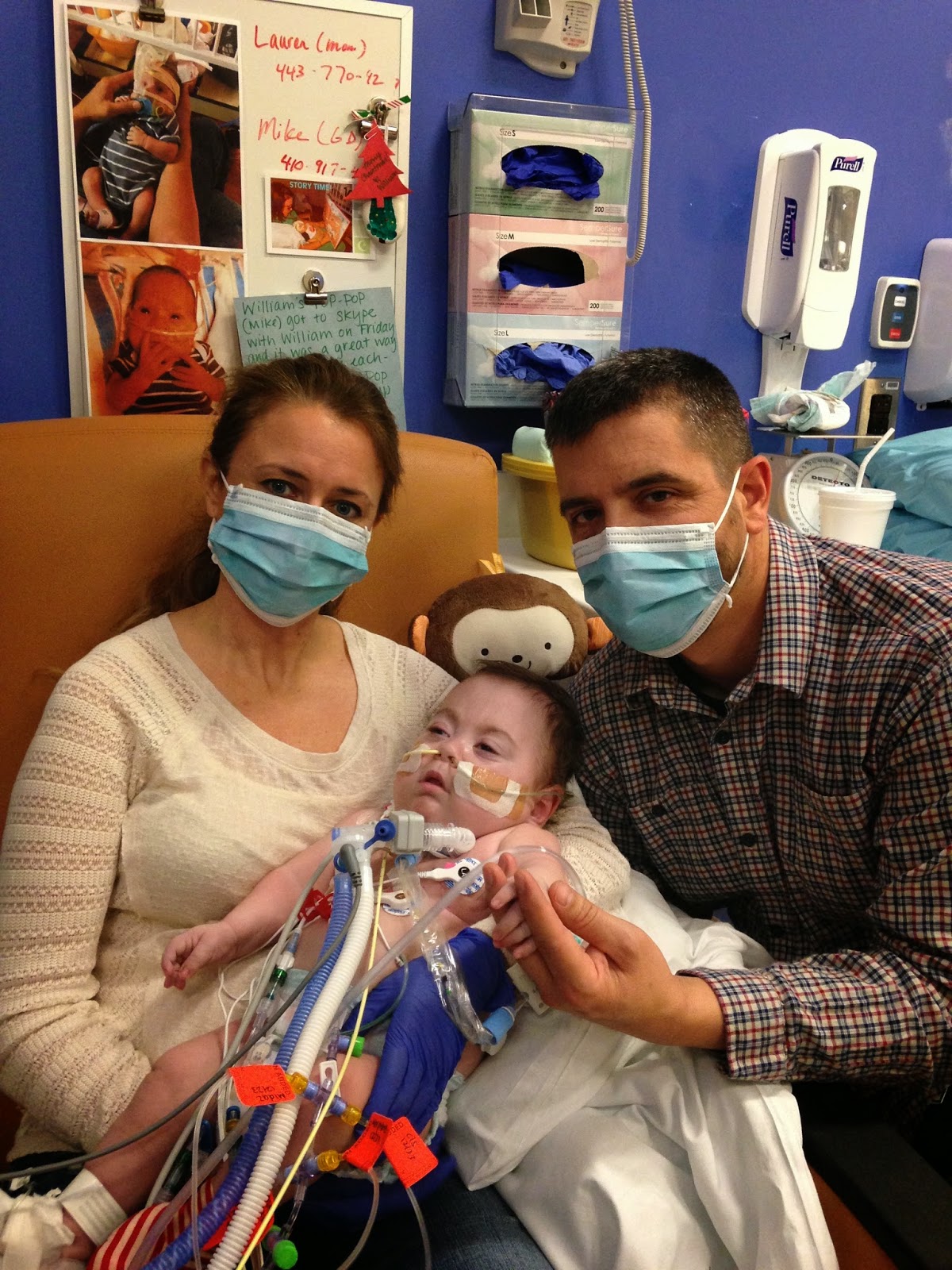 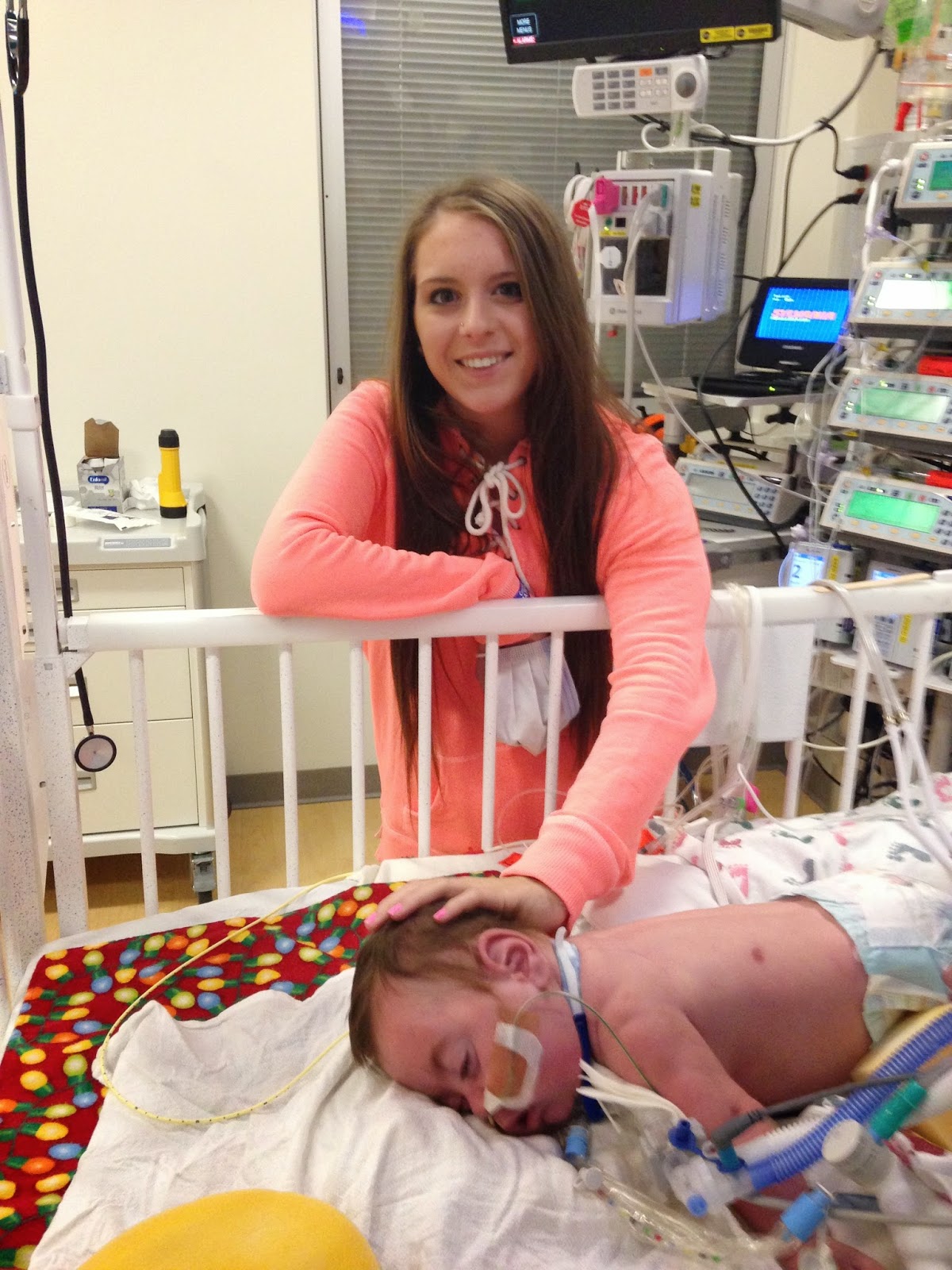 12/27-12/31/2014: Everyone seems to have colds and so we are staying away from William for a while to make sure he doesn't get sick as well. It's been frustrating because William hasn't been feeling good this past week either and having some desaturation issues. 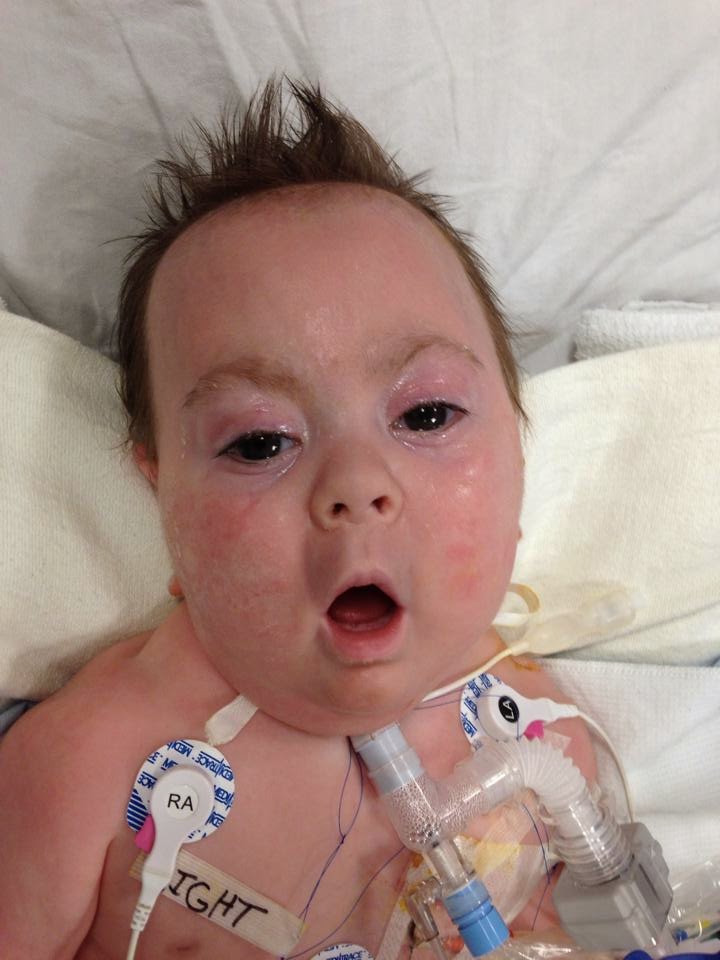 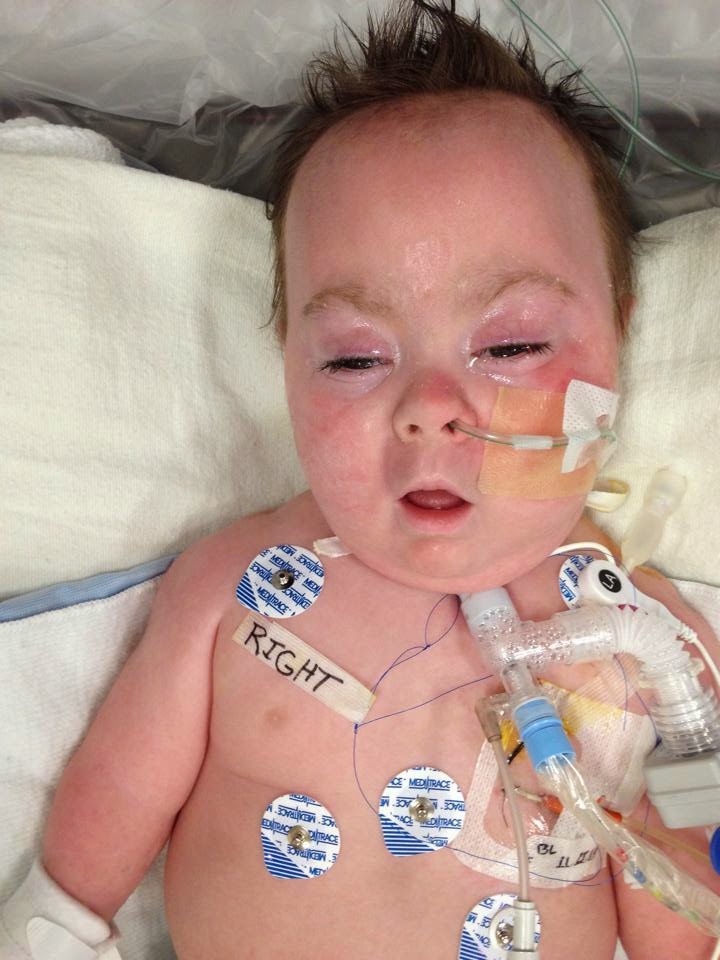 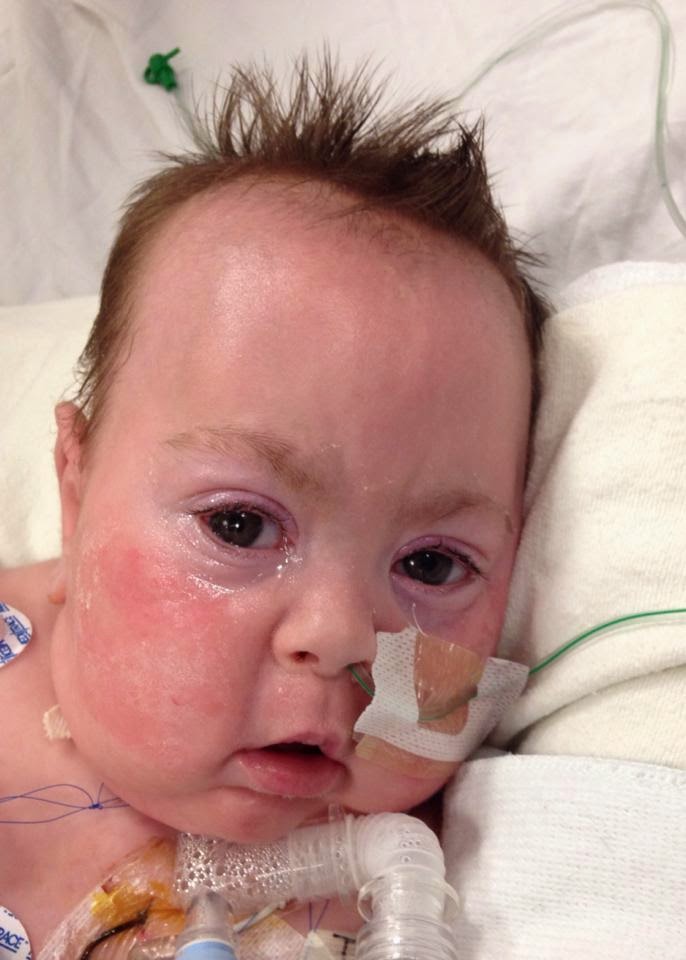 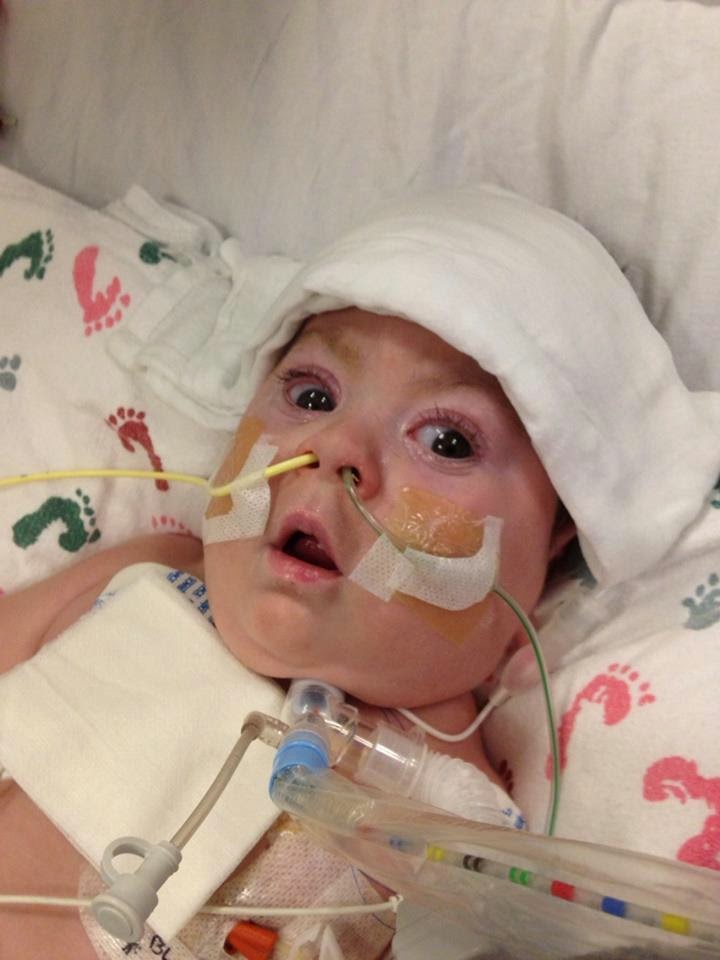 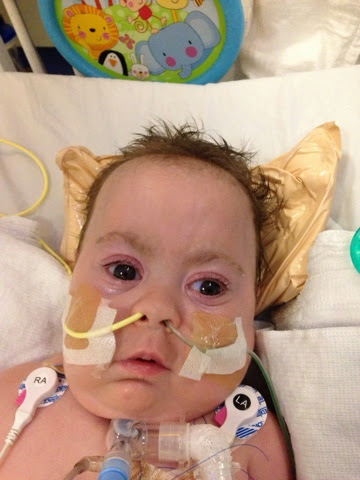