1/1/2015 Happy New Year William!
I have had a cold since the past weekend and have not been to see him and it's driving me crazy but I can't get him sick!! On top of that he's been having a rough week of ups and downs. Earlier this week they sent cultures and did find staph in the secretions and have him on antibiotics for that. He really didn't have a fever or symptoms, but he's had a few fairly big desat episodes the past couple of days and he's been on 90-100% fio2 again  this morning they had to go back up on the paralytic and his rate on the ventilator. The rate isn't a big deal but the paralytic is lousy because I know he's "awake" under that stuff. They don't seem to have a cause.
We have a family meeting tomorrow. We haven't had one in a while. I hate having it when he's having a bad week.
William is definitely having the worst week he has had out of the last 3 months. We didn't get a lot of positive news at the family meeting. Basically they are saying he hasn't improved as much as they were hoping with getting the trach.

I agree to a point, but it's easier for them to say that when he's having a rough time.

1/3/2015: Yesterday he was struggling to get his sats up over 80 on 100% fio2. They are calling this episode just a progression of his lung disease, but to me it's too much of an acute change.

I'm praying for a treatable problem to be revealed if they can find one and for lower oxygen requirements and higher o2 saturation. 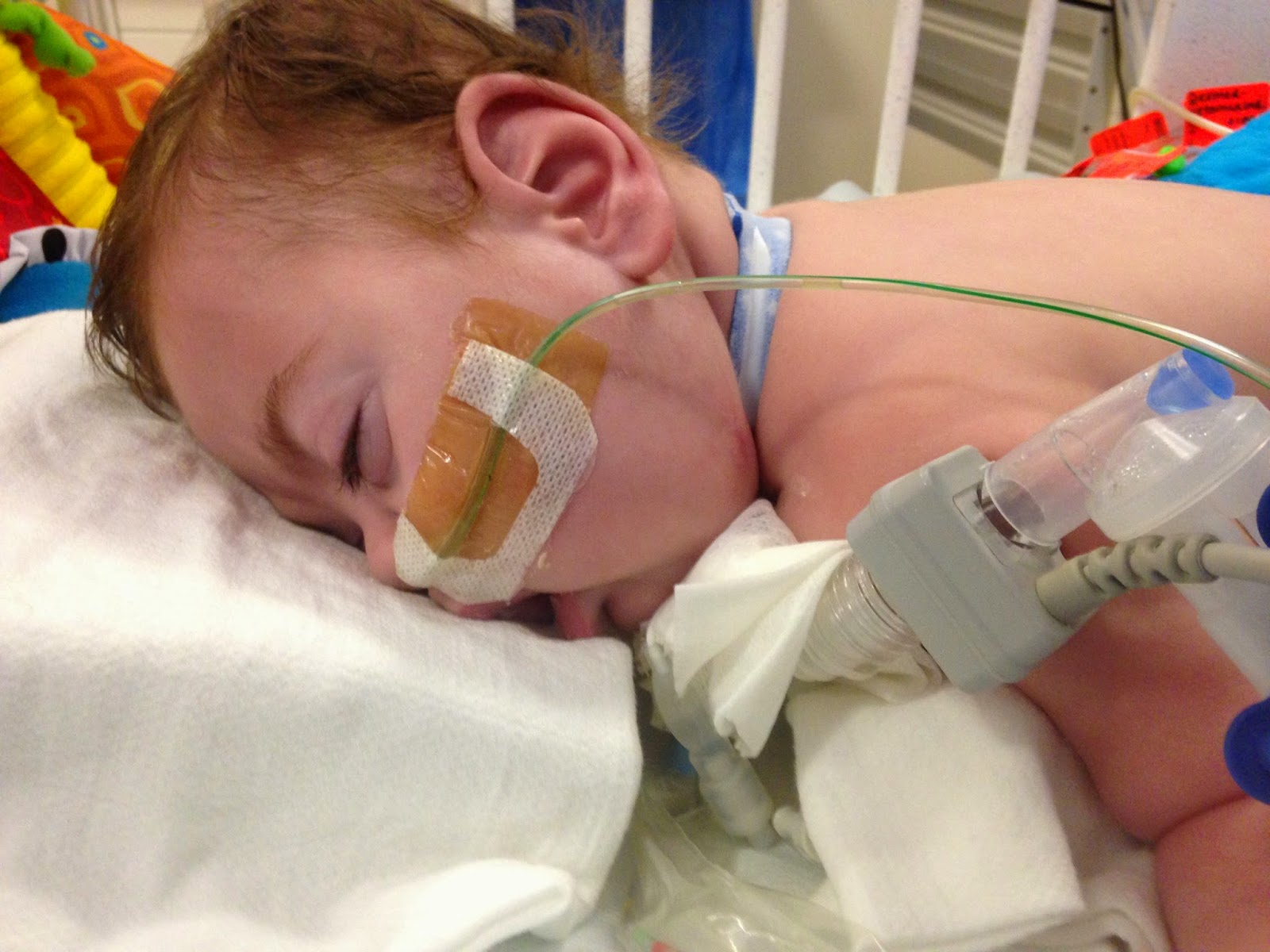 I'm up visiting and he was on 90% fio2 when I got here satting low 90's and they even weaned him to 85% and so far he's tolerating it. He's been sleeping and is prone. I got a few peeks from him though.

I love this guy so much. I hate seeing him up against the wall.

1/5/2015: Tom who knows William from mdshooters.com came up to visit William tonight and prayed for him. William and I appreciate it very much.

The docs did get one more clue with the recent blood work. White cell is normal. Hemoglobin is a little low 10.2 ( they won't treat usually until it gets to 7 but with him they would probably help him out at 9, but I feel like he would benefit from a higher hemoglobin like 12-14) anyway, his proBNP (marker of inflammation of the heart) has been @ 300 and its up sharply to 700 so the changes they made today were to go up by 2 on the trepostrinil and increased his lasix. He was on 85% and satting 85/86. He even tolerated a blowout diaper (code brown) that trashed all his sheets and required a joint effort to clean up from. Secretions still seem a bit heavy to me from last week. 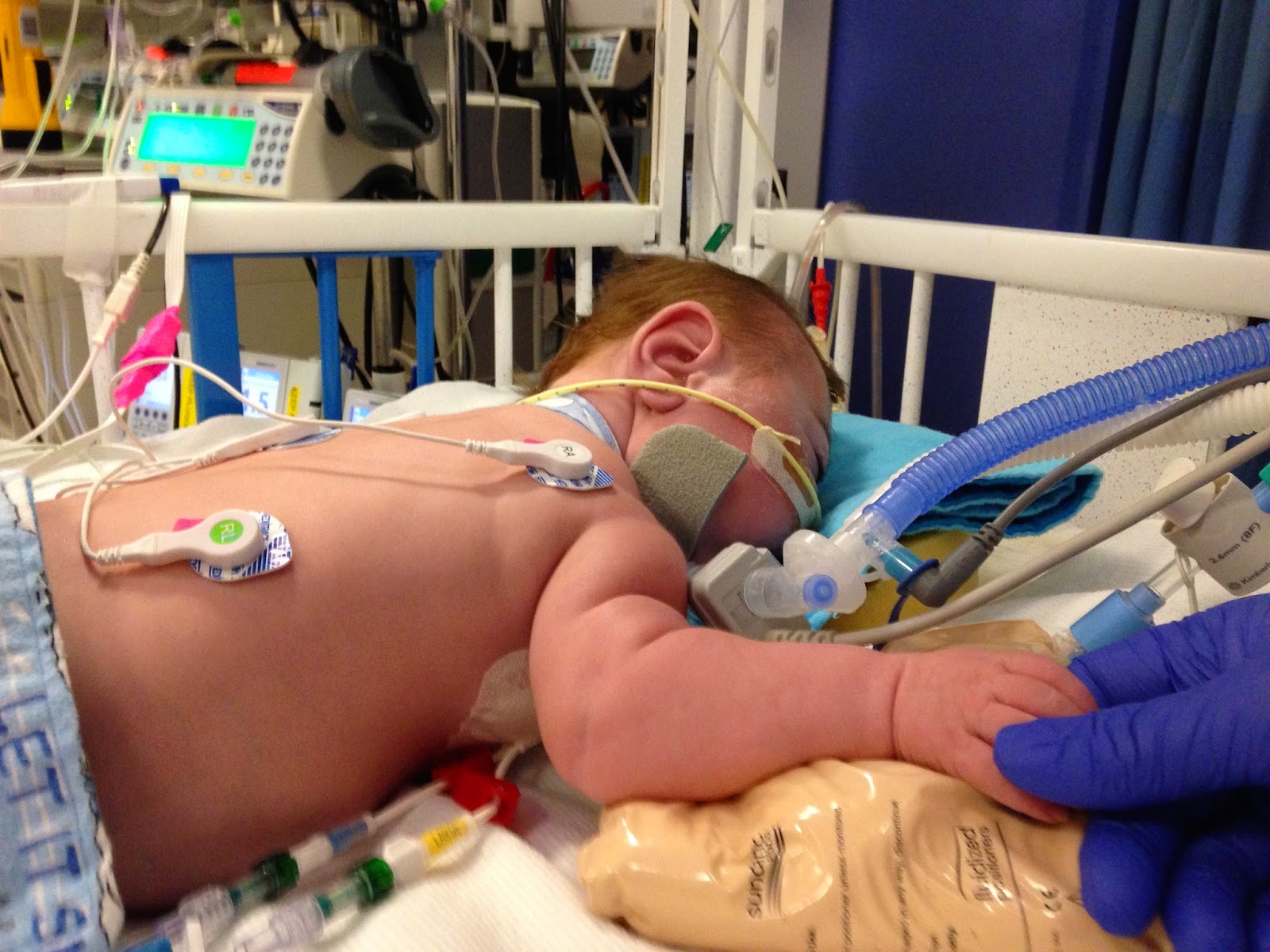 Lighthouse Church is praying for William 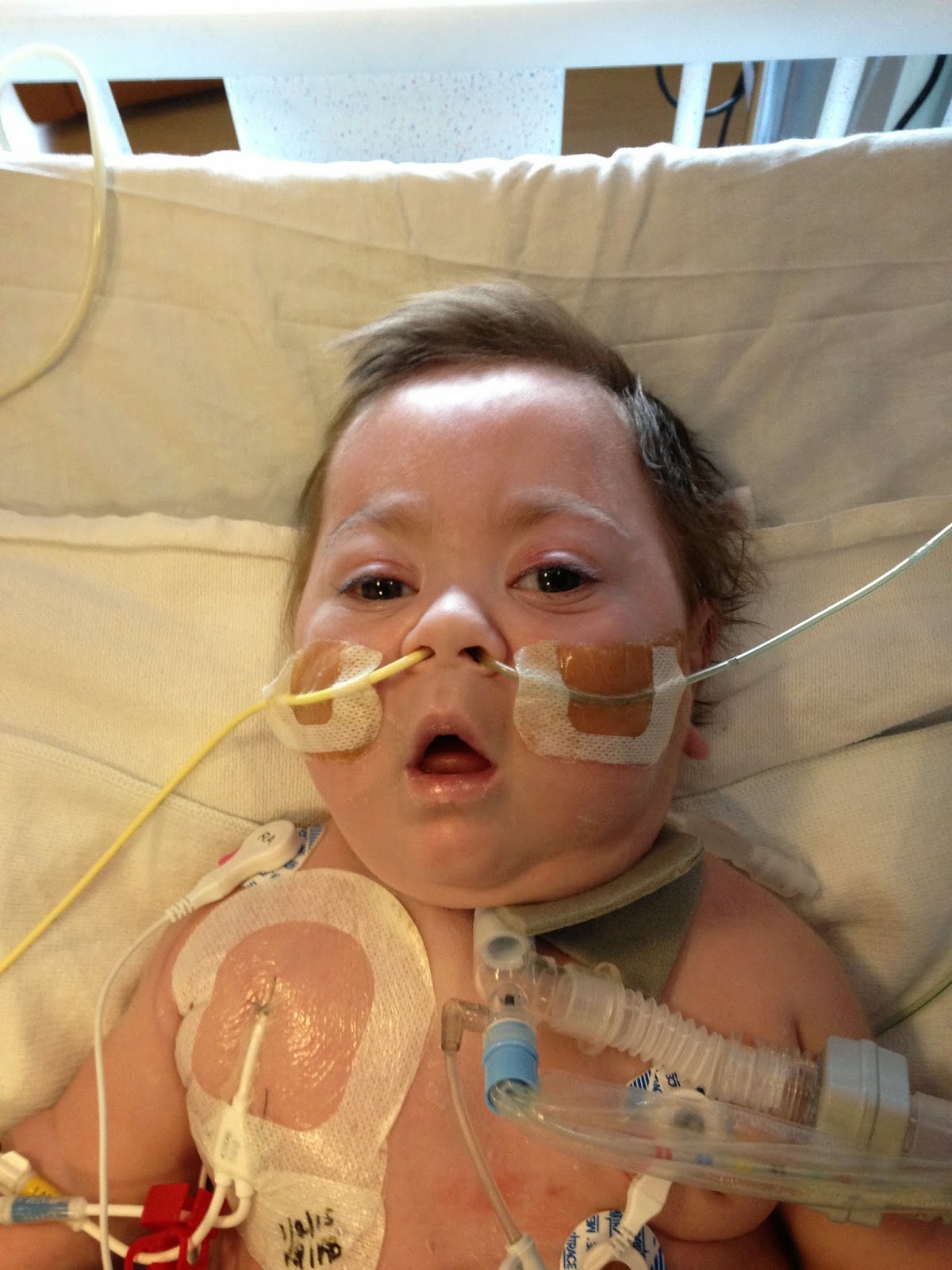 1/8/2015:
I went to our Church (lighthousegb.com) last night for the night of prayer. There were not many people there that braved the weather, but a few of them told me that William was the main reason they were there and they did bring up William's story and prayed for him, then we broke into groups and did more prayers. It was good.
The other day, the chat with the doctors was basically that they think William is heading in the wrong direction and while that doesn't mean there is no hope, that He wanted to make sure we understood how serious this was becoming.

Last night William was still on 100% Sats were mid 80's and as high as 90 but he also had an episode into the 70's that required some extra meds to get him to settle. He's still prone.
Go William Go!

1/9/2015: Despite the good oxygen sats last night he has been having a desat episode for the last couple of hours sats have been as low as the 50's and were in the 60's when I just called again. Apparently this was related to trying to reposition his head so they are taking more care to do what he needs.

Today has been mostly low 80's and a few dips in the 70's but after the morning trouble he hasn't needed PRNs and he has been having a little evening rally and had his sats in the 90's again for 90 min and is now 80's. Been here all day. Going home now. Praying for a safe night well protected by our savior. Go William Go! As I write this he's back in the 90's

1/12/2015: The last 48 hours have been a little better overall. Sats have been a little more relative to this bad past week or so.
He's been on 90-100% fio2 and sats for the most part have been mid to upper 80's. I think on Saturday they went up a bit on the morphine and midazalam drips because his desat episodes seem to come in waves and they give a bunch of PRNs and he's zonked for a few hours. They thought better to keep the background medicine higher. They didn't increase the paralytic.
He was even on his back last night and this morning on 90% fiO2 and satting good so that's an improvement.

James 5:13
Is any among you afflicted? let him pray. Is any merry? let him sing psalms. Is any sick among you? let him call for the elders of the church; and let them pray over him, anointing him with oil in the name of the Lord: (*James‬ *5‬:*13-14‬ KJV)
I asked the elders in the church to pray for William. One could not make it but found me yesterday outside and prayed with me for William. Some others came up last night.
During his visit he started moving his fingers and gripping then trying to move his arm a little and eventually figured out how to raise up his arms even with the paralytic. He's like "what paralytic?" 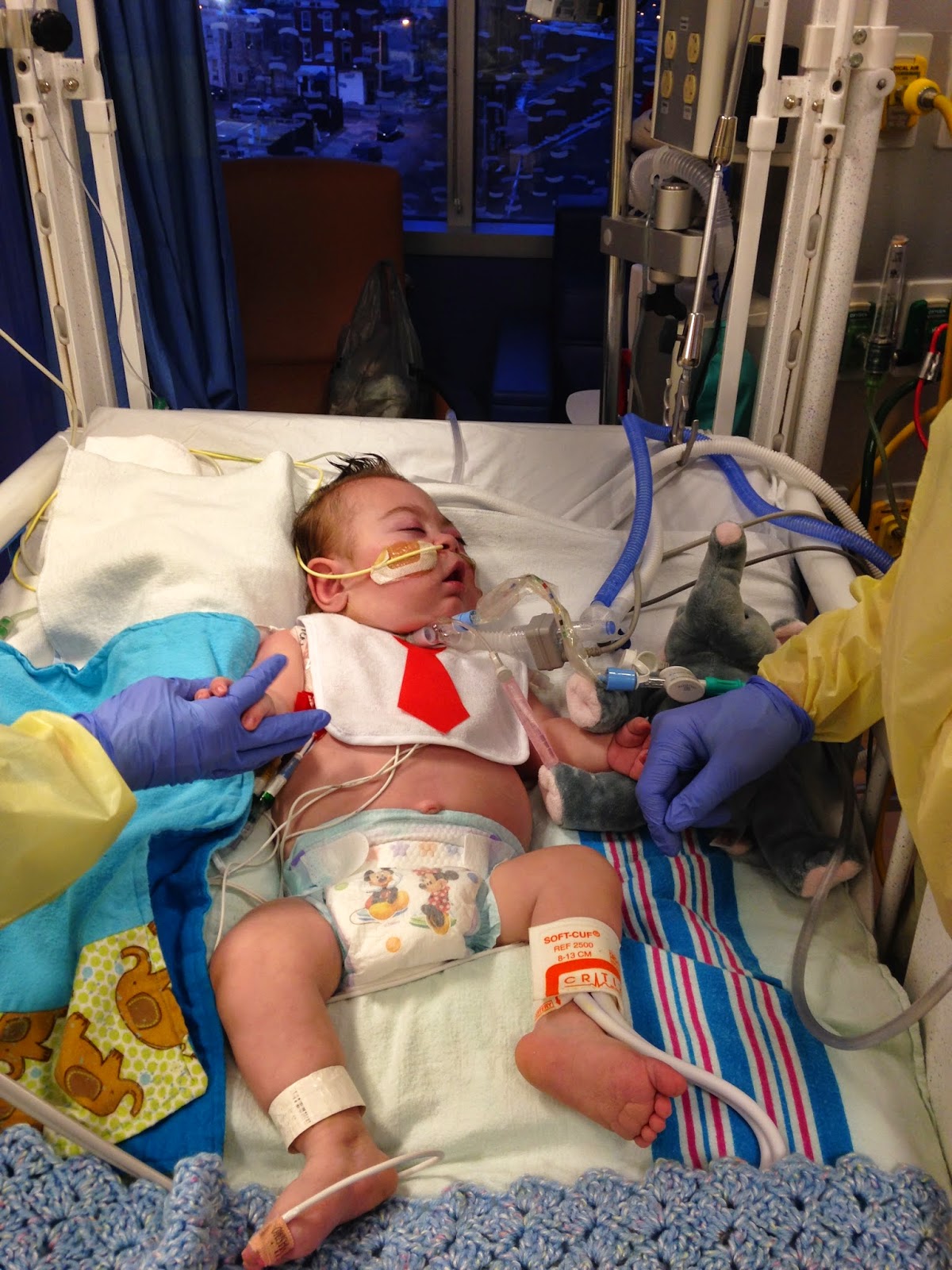 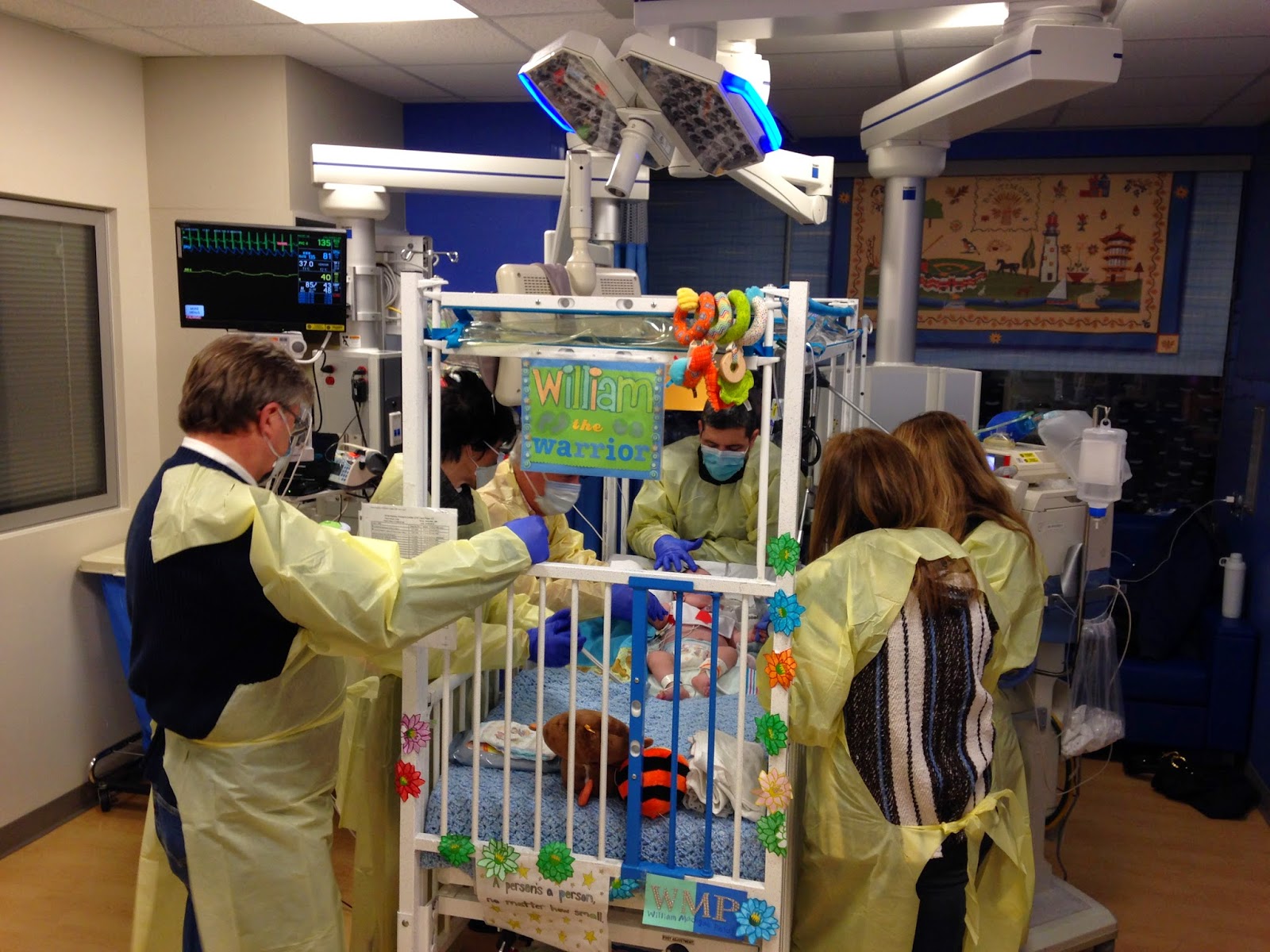 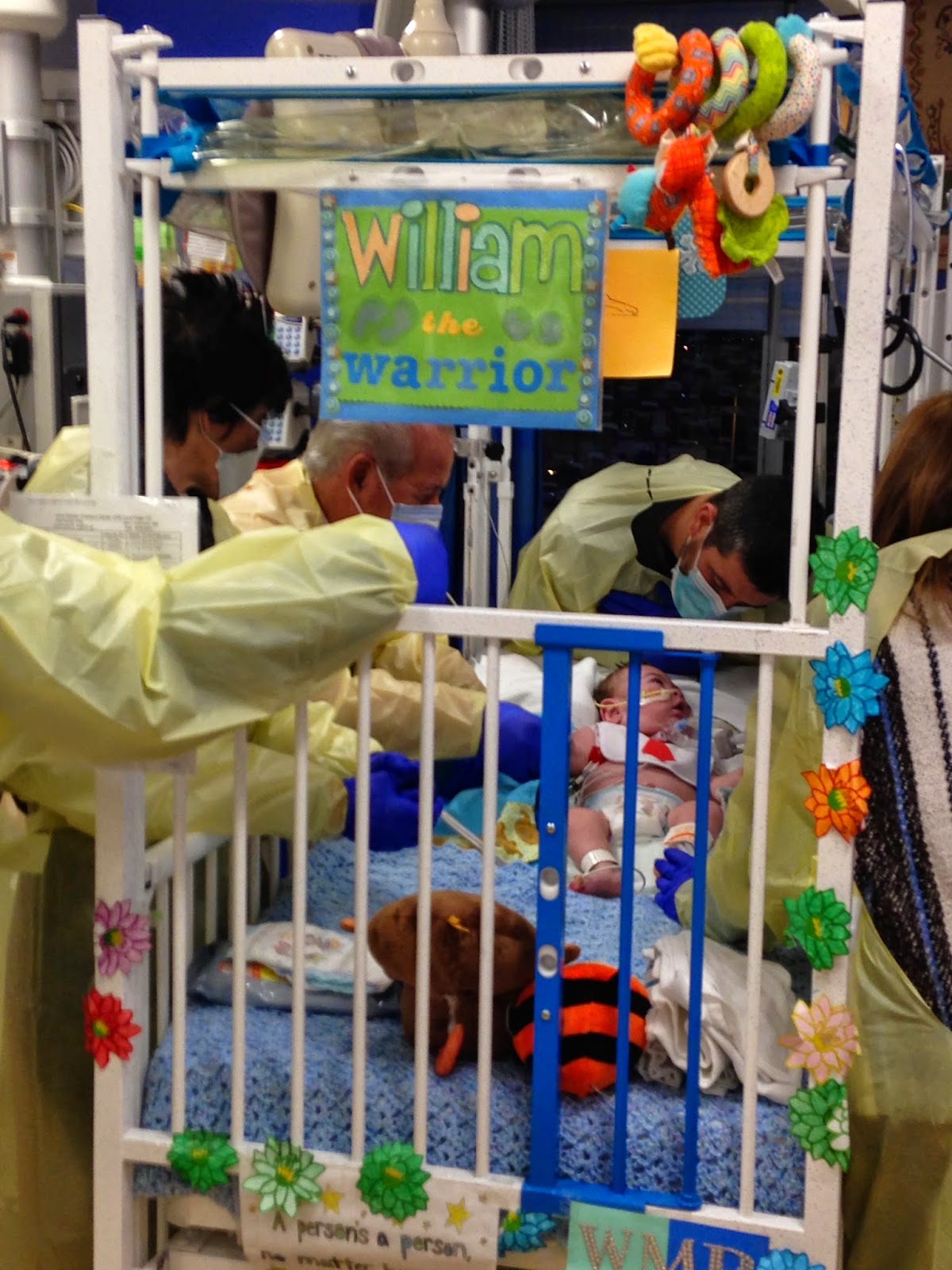 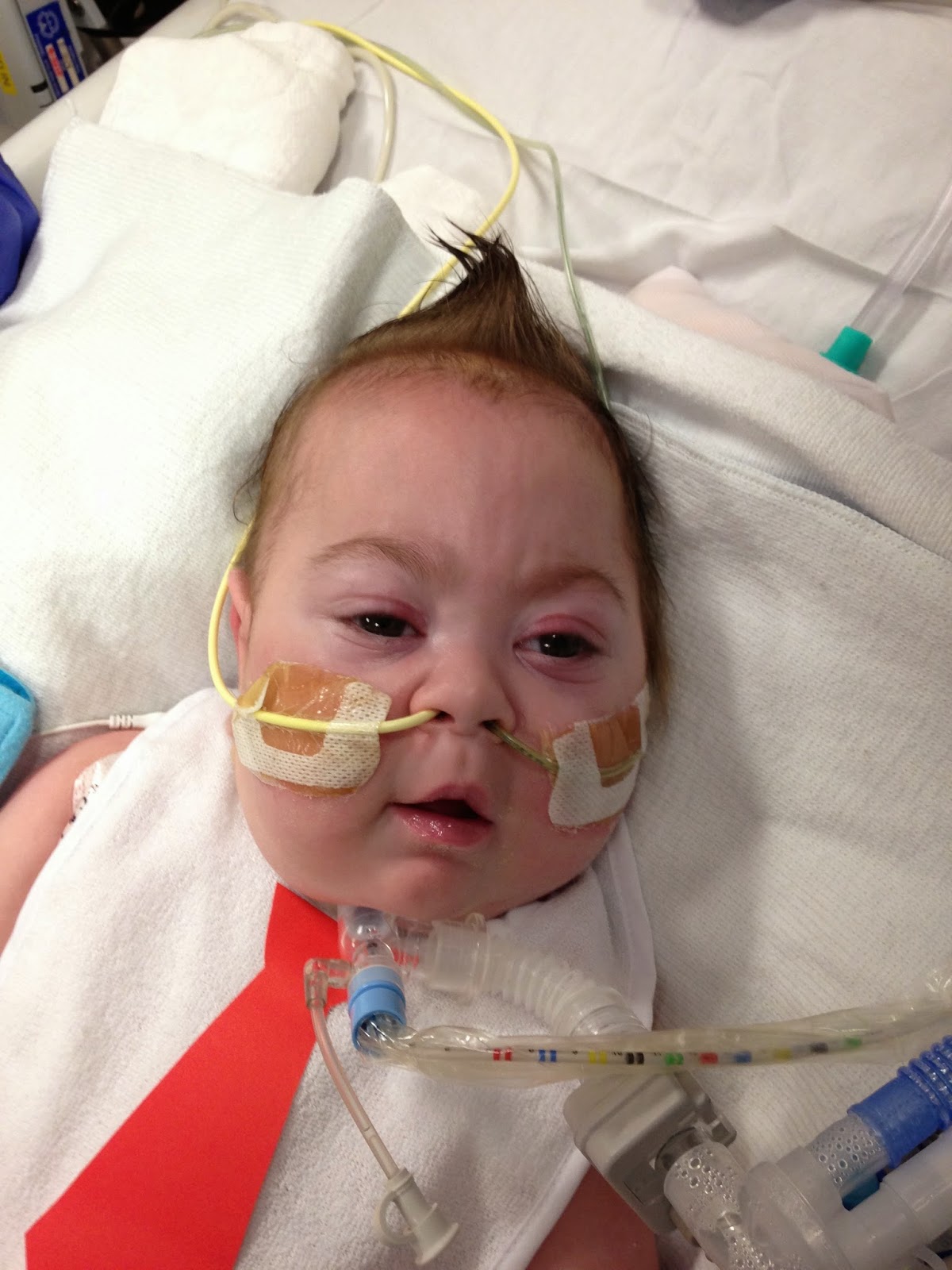 
1/15/2015: William has been having ups and downs the past couple of days. It does seem unfortunately the downs have been a little more down than the ups. They have increased most of his sedation meds other than the paralytic to dosages that are higher than before the trach.
The past 2 nights including tonight his pop pop seems to have a good affect on him, both times I got here and he was in the high 70's to,low 80's and he has slowly climbed his was up with his sats and down with his HR. Last night he was satting 95 when I left. Overnight was ok, but his morning was rough. He seems to like it quieter in the room. This room is freezing, yet this little inferno is wearing only a diaper and has a light blanket on him. He does not like being hot though, he had a temp for a while last night and sats and HR improved with a cool rag on his head and back.

Lots of prayers and love for this guy. 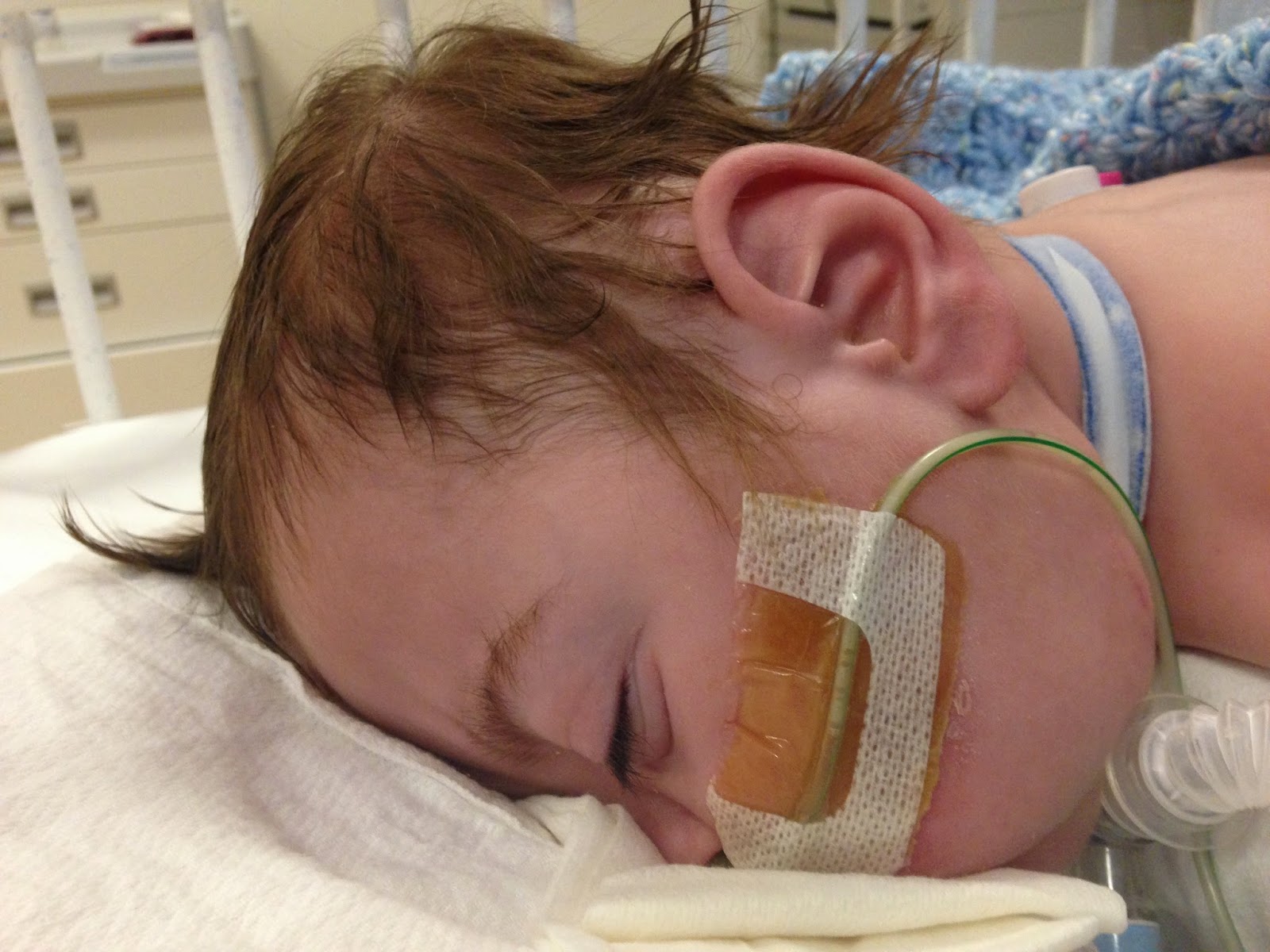 1/17/2015: Yesterday I would say overall was a good day for William especially compared to the past 2+weeks. The night before one of our favorite attending physicians Kristen stopped by 2+ hours after she signed out and talked with me about William. She was going to check on a few things and review some things in his history and ask one of their lung disease docs about him. She also talked about holding him or a modified holding him and even maybe getting a bigger bed that we could get in to be closer to him.
Marina is one of the charge nurses that William has own over and she stopped by with some ideas also. She feels pretty strongly about William's response to touch and talking with him and patting his butt/rubbing his head and actually wrote a note to all the nurses approved by the docs that rocking him,patting him and talking to him can have the same effect as a dose of morphine or midazalam.
Anyway Marina assigned herself to William on Friday. She is great. I got there late morning with my daughter William's Mom. William was on his back he wasn't superstable but they did feel like he needed to spend a little bit of time to give himself a break. His hair was wild: 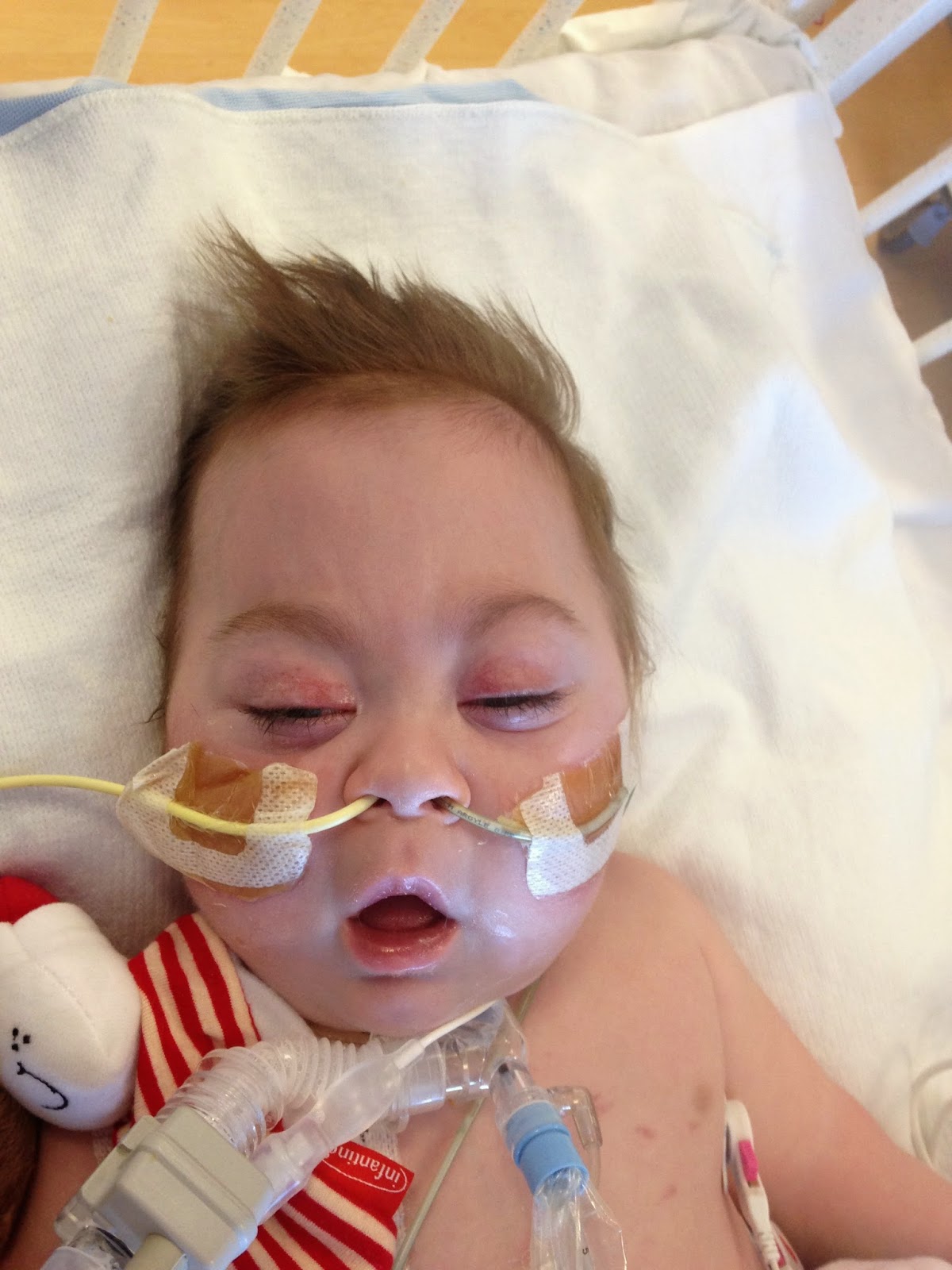 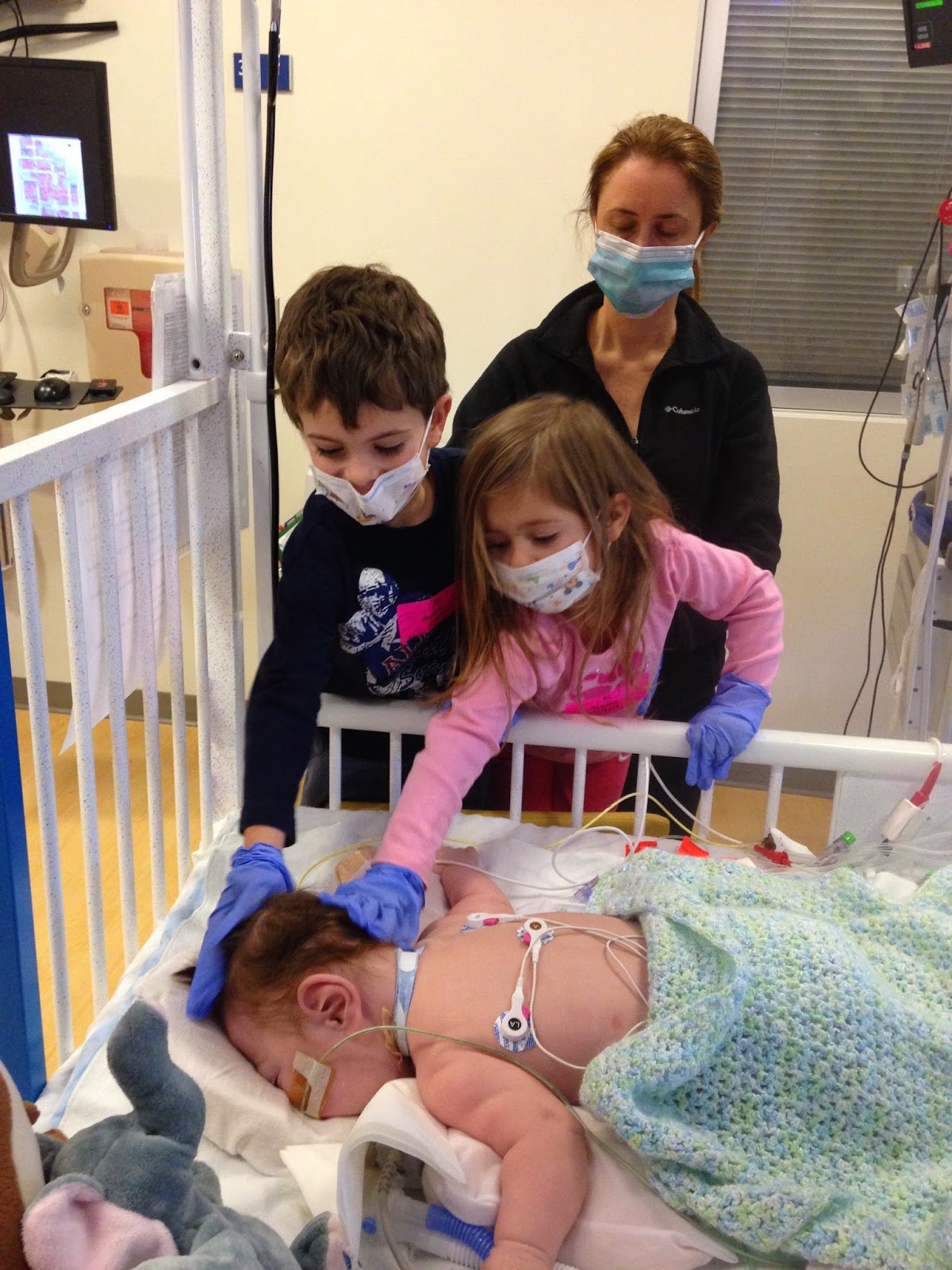 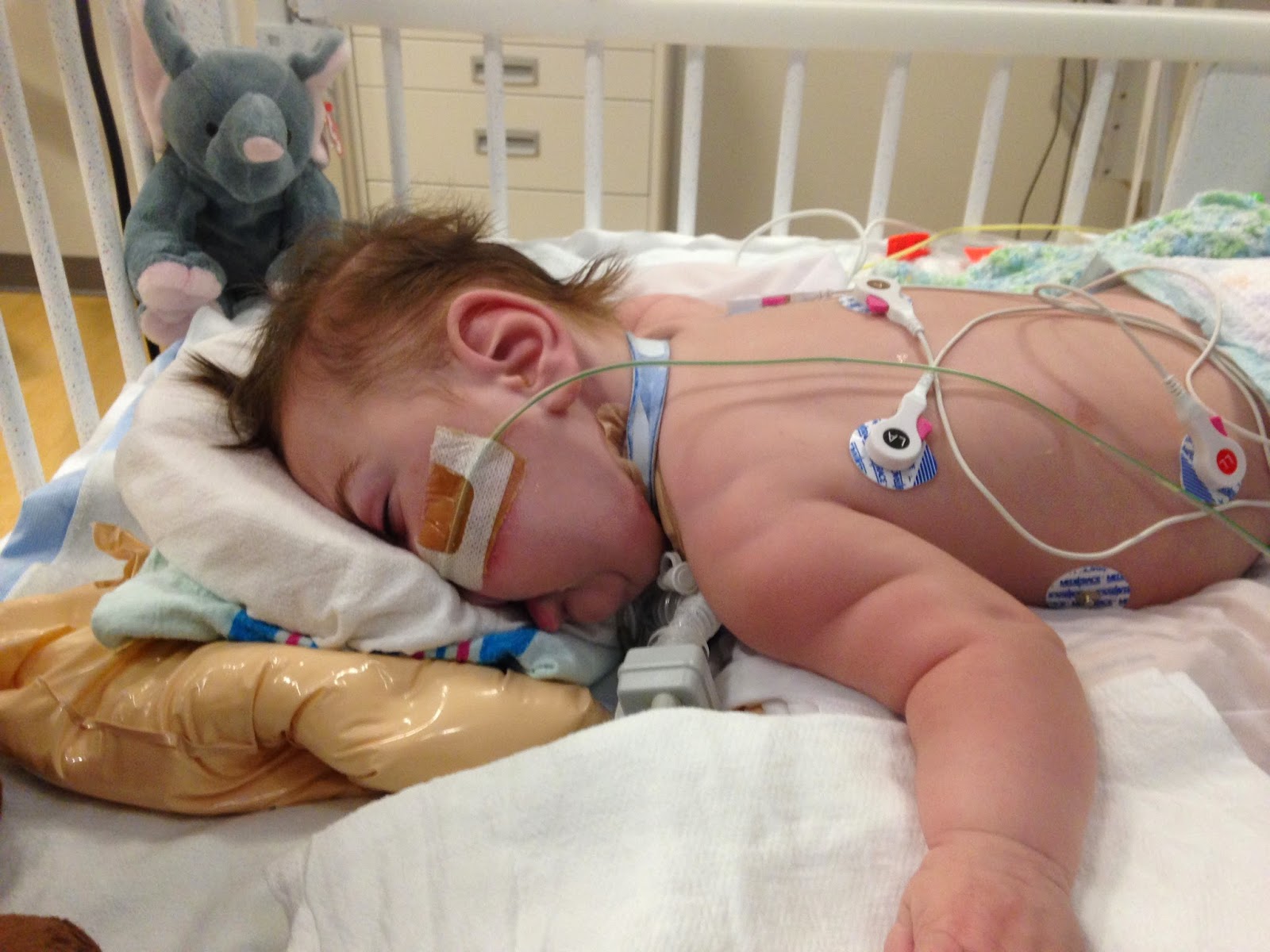 Eventually he wasn't having it and went prone and was happy sats wise. Later in the afternoon his brother and sister came up with my wife to see him for the first time since he was transferred from Bayview. Initially I was worried a little bit that they might get a little too wild and get his heart rate up but it turned out to be a good visit. There was a point at which is oxygen had been turned down to 90% and his heart rate was in the 120s and he was satting 92!!! The whole time the kids were talking to him and touching and run around after they got over being shy.
Marina his nurse took a picture of his sats and his oxygen and took it down to the attending physician Kristen and said "see this is what love does..."

Overnight he had a nurse Sara that had him a few months ago. He was her only patient. Marina was telling her he likes his head rubbed and butt patted and she said she said she could do that for him all night I felt he was in good hands and went home earlier than last night. She said this morning he had a pretty calm night and today Candice is his nurse - she's really good so he's in good hands. 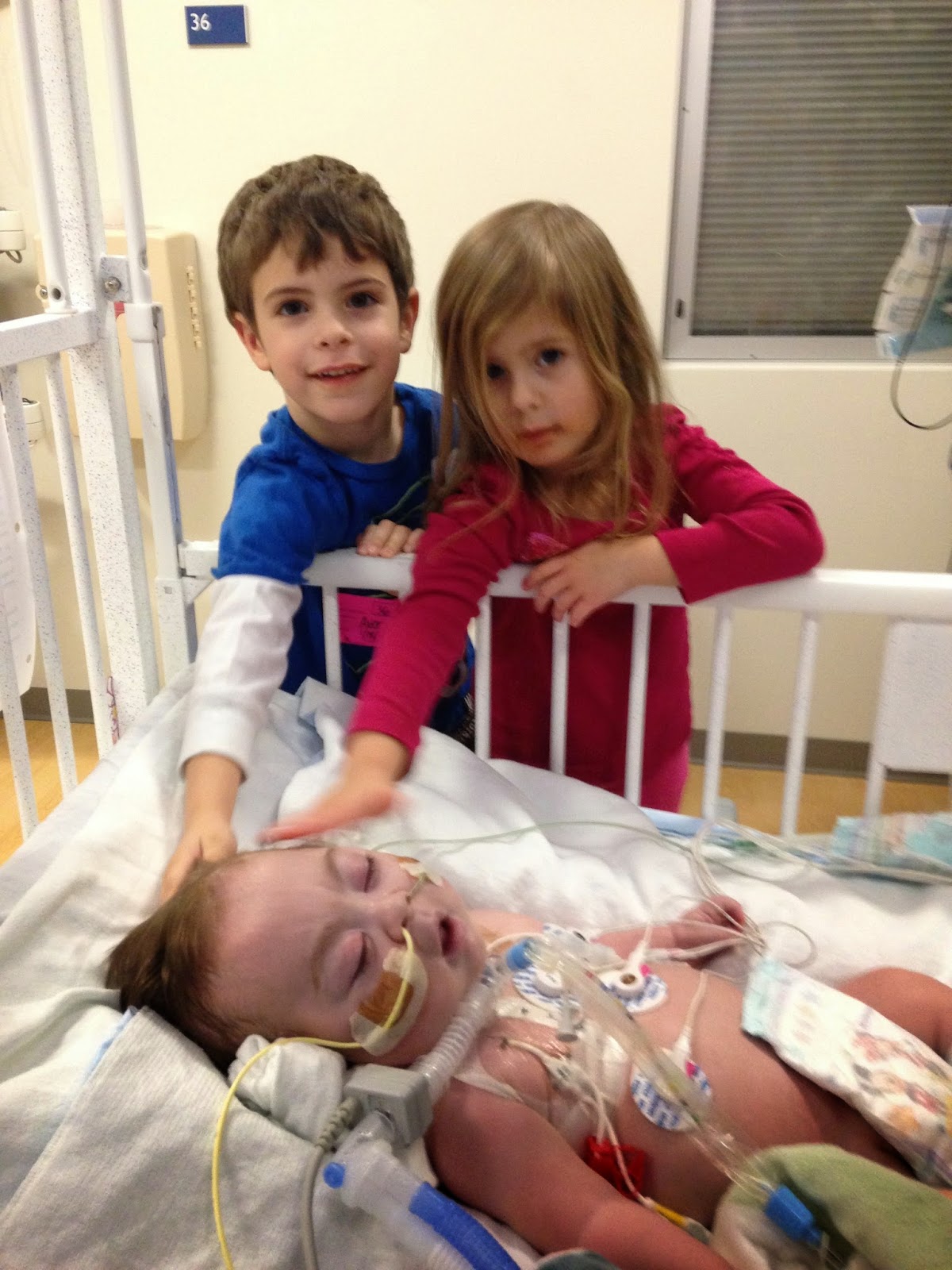 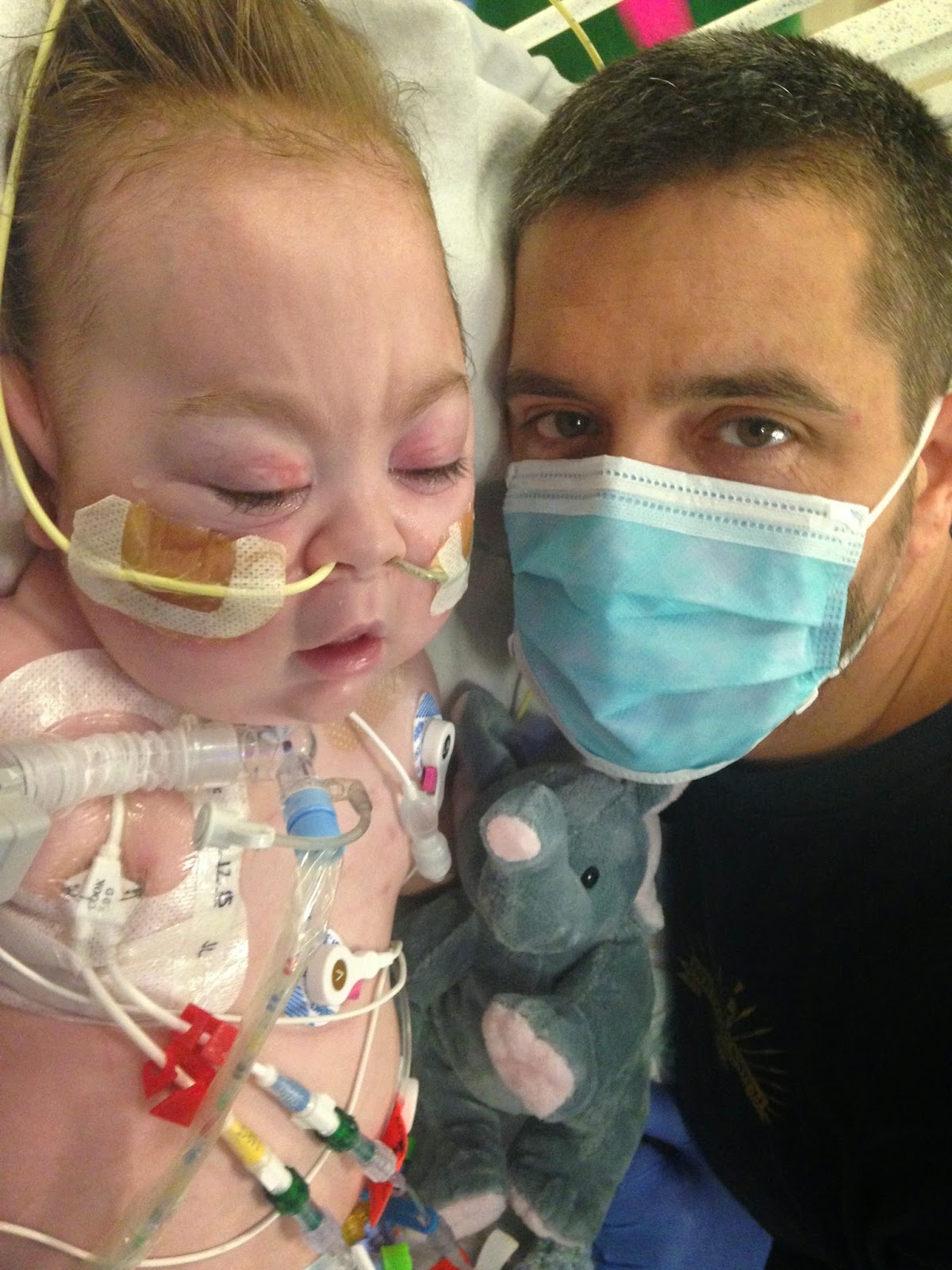