4/1 - So with William doing better with the paralytic weaned off, they asked about reconsidering him for lung transplant. To be evaluated there were a number of things to do - testing and evaluations. One thing was an MRI to rule out any issues with bleeding or a stroke or anything that could have been missed along the way since he was born.

This week he is getting a course of steroids and he has been more stable and lower FIO2 requirements. There is risk of him dying in the MRI. He will have a different trach, be on a different ventilator, be sedated and his ICU team can't be in the room with him. If he crashes, they would have to do an emergency shutdown of the MRI machine and it would take some period (several minutes? Not sure) to get to him. The sooner they can do it the better.

I'm praying for a spot to open up on the schedule this week and for his safety and for the team to account for everything and take the precautions needed. 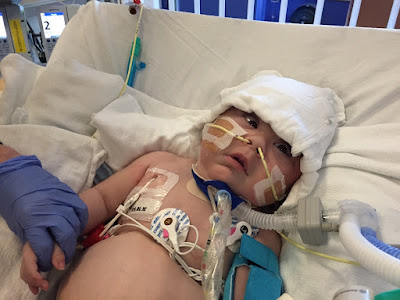 11AM - He just went back a few minutes ago he was satting well and ventilating well. The only concern was they didn't have the trach tube they wanted so they used a cuffed ET tube cut down and placed where his trach was.
That that tube stays secure and in place is my biggest concern during the MRI

Prayer for William: Dear Heavenly Father thank you for the opportunity today to get this test done. Please protect William during this procedure and help the doctors nurses and technicians to keep him safe and get the information they need from the scan. We pray always that you find a way to heal him and get him home. In Jesus name we pray for sweet William, Amen

1PM - MRI done and he is back in his room safe and sound.

4/3 5PM - Another Prayer request: William has a pneumothorax. Sats were 30's/40's and stuck there on 100% FIO2. They gave 2 choices: chest tube or do nothing. Doing nothing meant he would not survive. Chest tube might never come out if he keeps getting these.

I wasn't going to stop by but I switched my volunteer hours for Parking crew at church with a guy that needed to go to a wedding so I was here for everything.

They are doing the chest tube now. I'm waiting in the waiting room.
6:30 - Tube is in, checking placement with x ray

He was having a good day, FIO2 had been in the 75% range most of the day then at 2:45 he was desatting and in the 40's/50's and he projectile pooped all over the crib, so they were thinking he just had a big blowout and it was from that. I got there unplanned around 4 something and he was drifting into the 30's and not getting better. They gave PRN's and it helped a little, they paralyzed and it helped a little for a while, but I was thinking this didn't seem like a typical William episode, he looked like crap and was not good, but his Heart rate was still good.

I asked if it could maybe be a pneumothorax and Andy, the fellow said possibly we can get an xray so they came and took it and I could see some dark areas, but not an MD so they checked it and determined it was a pneumothorax. It's being called progression of the lung disease and a consequence of his dependence on higher pressures to keep him ventilated and the lungs are susceptible to developing leaks/holes. It's one of the many catch 22's here in the PICU. Anything can happen and it can happen in a heartbeat.

Sometimes the docs like to blame everything on lung disease progression - well I just did some searching and found that steroids can cause a pneumothorax so maybe it was related to the steroids ?

4/6 - William had a pretty good weekend - one issue Sunday morning where I think he was startled by his nurse flushing the toilet emptying his NG drain in the room where he desatted and took a while to come up. They did xray and saw more air and pulled 20cc out the chest and he was better and had a good day and overnight.

I have an Easter Basket for him. 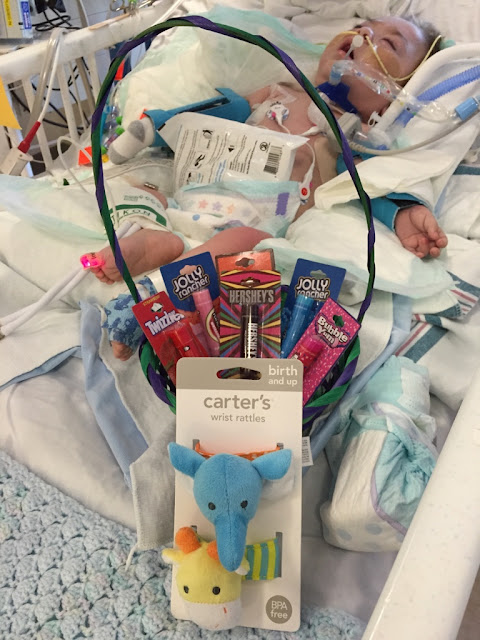 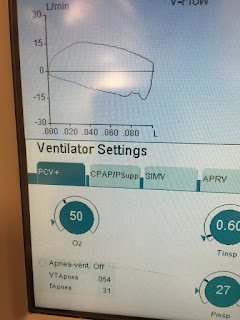 4/9 - Earlier he was smiling at the nurses and making them laugh after he code browned the bedding.
Pic from head of bed: 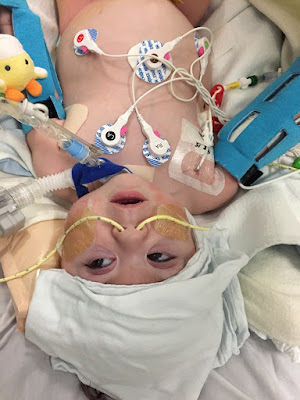 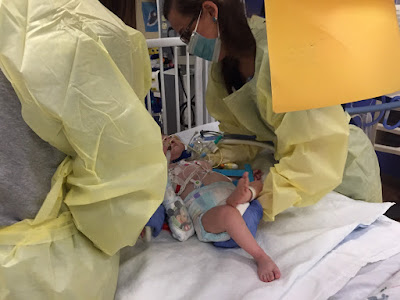 4/10 - Morning: I just called and last night his nurse said his oxygen Sats are 92% on 55% oxygen. She said he's been sleeping and in the evening that he had a bunch of visitors - at first I was like what visitors!? And she said it was all his nurses that wanted to stop and say hi because he was smiling and being playful. He is such a blessing and such a fighter. I love him to pieces.

Evening: Good day. He didn't sleep much, he was taking a nap when I got here and then he woke up feisty. He was a little too agitated and pulling at stuff and arching his back. He seems to be settling down but not sleeping yet. 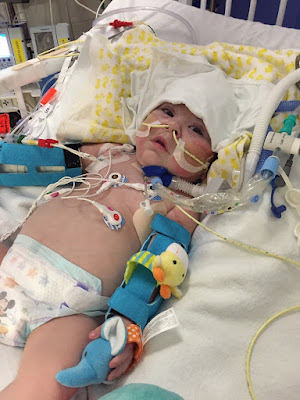 4/11 - Today's update - Last night William's nurse Katie said he slept a total of 40 minutes! I usually try to leave when he falls asleep, well last night he was up till 12:30am when I left.
Sounds like he is catching up on sleep today. They have weaned the vent pressures this past few days along with his breathing rate and they have come down on his midazalam IV med twice. That may be why he was a little agitated/restless.

Anyway here are some pics and a video 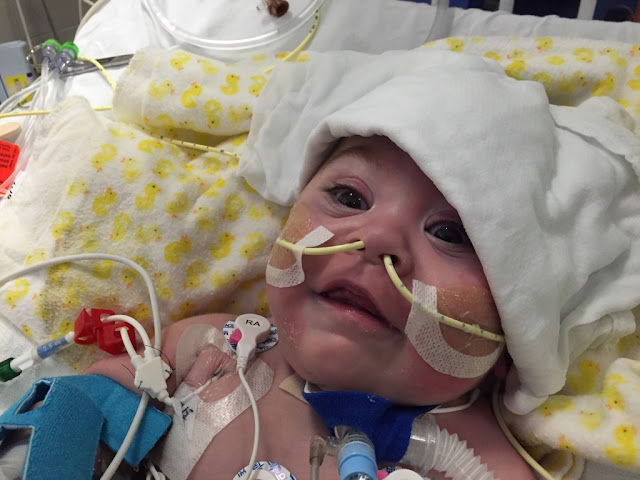 4/14 - Another good day and he's slept through my visit and the 8:00 cares again.
Katie said during the day she didn't have to touch his oxygen - 60% all day long. Pretty uneventful other than a major code brown earlier today.

Of course he waits till I'm leaving to wake up.

4/16 - I can't remember if he's actually ever been in this particular chair or not he was once or twice in a bouncy chair but I think this one is more upright and they said it it's a physical therapy chair and helps with neck muscles and core strength.
He's doing good still 60% oxygen and they were able to wean his Dexmedetomidine today. 2.2 to 2.0. 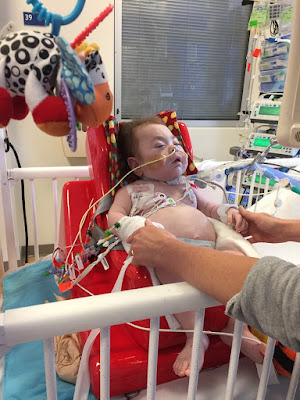 4/21 - He's been good overall. Lots of time on 50% FIO2, they have been weaning slowly. The only issue has been gagging after medicine.

He was not happy last night in the chair - had been there too long I think. 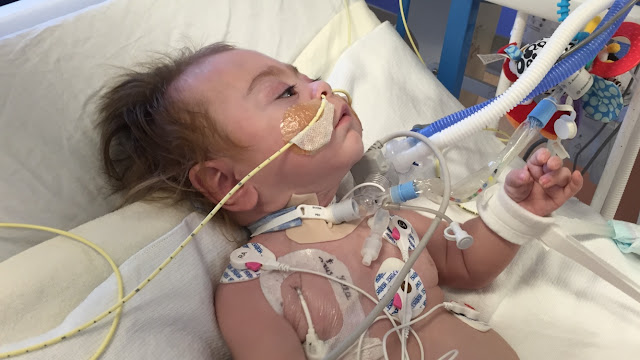 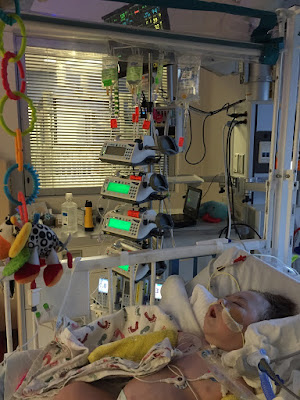 4/27-4-28 Baltimore Riots - JHH had National Guardsmen on site. No issues with visiting. 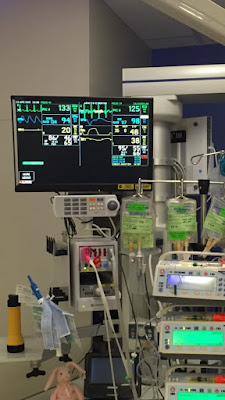 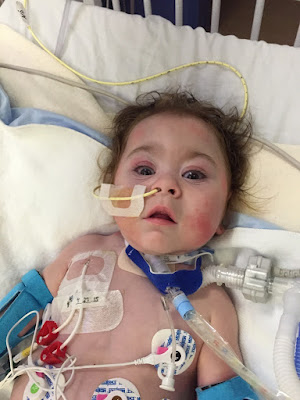