I left off with a post on January 19th. I was off that day and patching my roof, but had been talking to the docs and nurses off and on. I had a sense that things were not going well and they wanted me up there. He was not feeling well but we did watch Rocky III on DVD and he seemed to like the fight/training scenes. I went home late that night after he seemed to be settled a bit.

The next day I was up here with him and they did an out of line suction that caused William to desat into the 30's fast. Everyone was in here. I think they were worried he wasn't coming up and the charge nurse Trish asked if I wanted to hold him and I said yes and we got him into my arms rather quickly. That was at 11AM and I was not letting go. I held him for over 12 hours and it was awesome. It was a pretty good day together despite the chaos at the start.

The out of line suction is always a little more dangerous because the ventilator is disconnected and you can go a little further. He hasn't been to happy with suctioning in general but lately it's been more agitating. 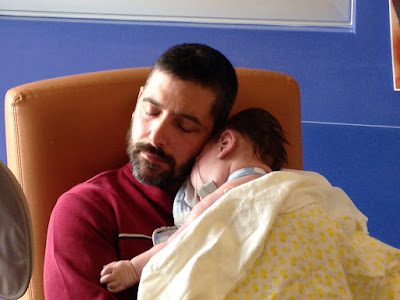 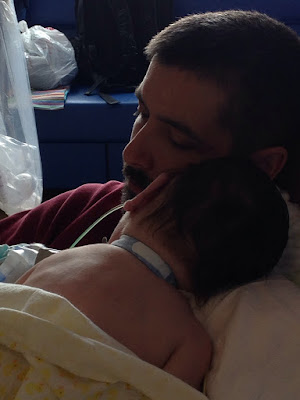 It was scary is all I can say. When it went to the 40's is when I stopped looking at the monitor and was focusing on him. There were like 4 nurses, 2 respiratory therapists and 2 or 3 docs in the room. I don't think they though his sats were going to come up.
I was nervous but not really worried. I felt my heart racing. At the same time I was thinking I just want to hold him, the charge nurse was like you want to hold him right? I said yes and that I basically wanted his chest against me and his head on my shoulder and I wanted my mask off (so I could smell him - weird maybe)
With like 8 people helping it goes pretty fast. We got situated and I got all kinds of towel rolls and pillows to prop us up. I did not want to move from that spot. I even ate lunch with him and a bib to catch crumbs. Finally after 8 hours I had to pee.
We debated on putting him back in the bed vs just lifting him up so I could run to the bathroom and one nurse even suggested getting me a urinal and to go right there holding him -haha, it kinda made sense. Anyway they just picked him up and held him. His nurse that had him Christmas week was disappointed she didn't get to hold him. I took a pic and it shows: 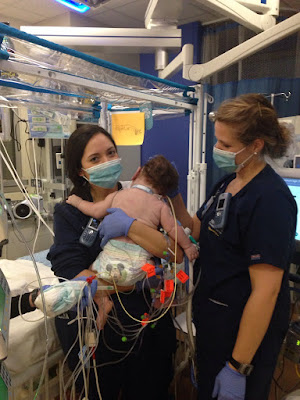 He had lots of visitors today, nurses and staff that stopped by to say hi or see him.
Anyway after that I held him on the other side until almost midnight. I'm sleeping here even though he is good at the moment. They did switch him to a full size bed: 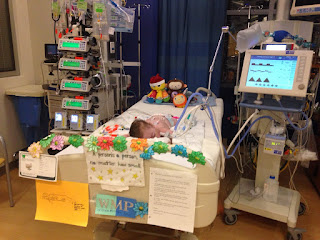 Wednesday night (1/21/2015) was horrible. Desatting to 31% several times. Wasn't sure he was going to survive the night. I helped fix him one of those times. He wasn't coming up and I suggested we he a pad under his chest (I was holding him) to get some room for his belly to expand and as soon as we did that he started coming back up. At a point, I was overjoyed to see sats above 55%. I eventually got in bed with him and spent the last few hours before change of shift right next to him. 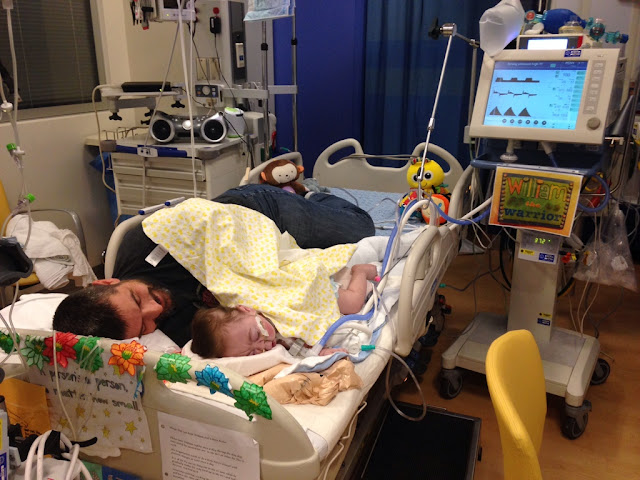 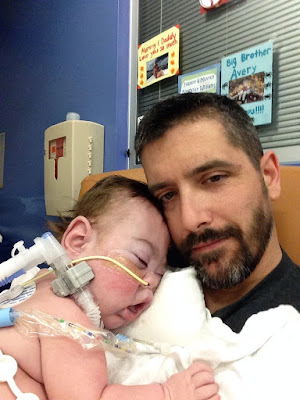 Thursday 1/22 was better. Our morning was decent. PT showed up and they asked if I wanted them to work with William or skip today since he had had such a rough night. I said yes lets do it and just see how he does. Megan who has worked with him from the NICU did some stretching and exercises. He loved it! Sats went up to 80/82 during.
The rest of the day was ok. He spent 6 hours on his back either upper 60's or low 70's.
While we were sleeping his nurse Lauren took a picture of us together: 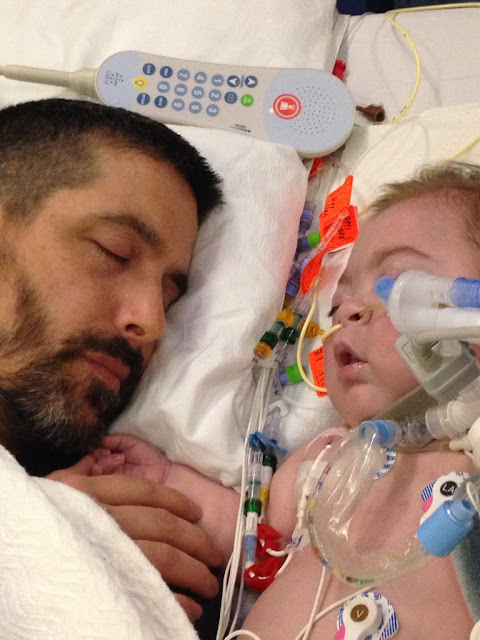 That evening is where we ran into trouble. I held him for a couple of hours. He desatted a little and we switched him to on my lap and he liked it until his nurse tried to suction him and the ventilator made a weird noise. His airway was blocked. She called for help and his sats kept going down to 19 I think at the lowest. They gave extra pain sedation and paralytic. A respiratory therapist came in and looked him over for a second and made sure the tubing was not the problem. She did dump some water from the line but it took a saline and suction combo to dislodge the trach plug. Once that was cleared he was getting air again and the sats slowly climbed back. Everyone was a little stressed. Other than that major event the night went ok and the day Friday 1/23 has been mid 70's and currently upper 70's
Pastor Paul and Mrs Vicky came to visit: 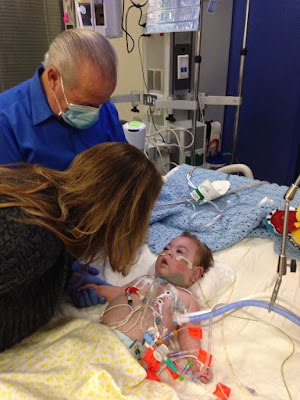 William and his attachments: 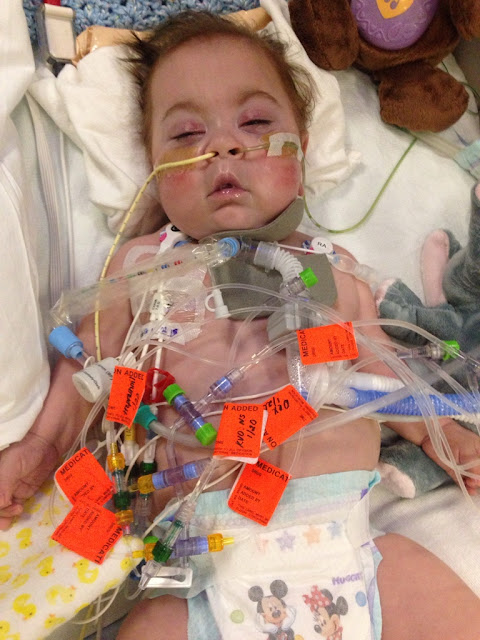 He was doing so well I left him for the first time since Tuesday and went to church.

1/28 - I got William's floor cleaned and reminded them that we hadn't changed rooms in a while to get a good cleaning.

He had a pretty good day. Went on his back for a trach change and stayed for a few hours. I actually left for 2 hours or so and stopped at my office. William was not thrilled on his back so I held him when I got back. It went well, but his heart rate was sitting in the 175's which was odd because he seemed totally chilled out and comfortable. He didn't seem warm to me and wasn't sweating like he usually does if he's hot. Temperature was 38.4 then 20 minutes later it was 39 and his heart rate climbed to 180.

We tried cold rags and eventually they gave him Tylenol. We also put him back in bed on his stomach. Earlier today he had a low grade temperature. With these fevers they decided to do tube culture blood culture and viral panels. The blood work came back showing double the white blood cell count from the last blood test. He's on day seven of bactrim but they might broaden the antibiotics he's getting with additional coverage. That was the deal up to 3 am. I went to bed when his heart rate came back down into the 160s and his oxygen was in the 70s.

The first labs came back showing high white blood cell count and high CRP. They switched his antibiotic to vancomycin. This morning heart rate is in the 140s and sats are in the high 70s. They still need to get a urine culture any which way vancomycin should cover whatever is going on if it's infection.

Pics
Hand mold child life made with us 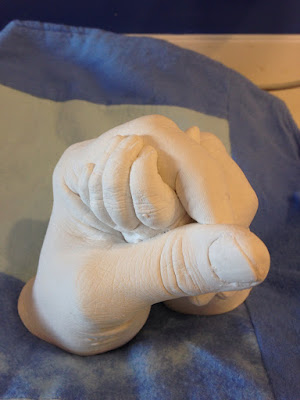 Card from the staff for 10 months -  I haven't been thrilled with most of the residents that have taking care of him, but there was one, Mo this past week that was really nice that I liked. I had mentioned to her that his ten-month birthday was in four days and this was right in the middle of his horrible week and she said she was going to get him a card. 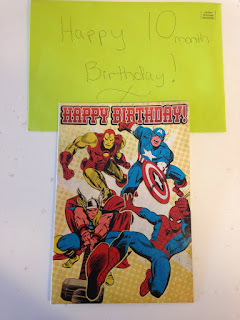 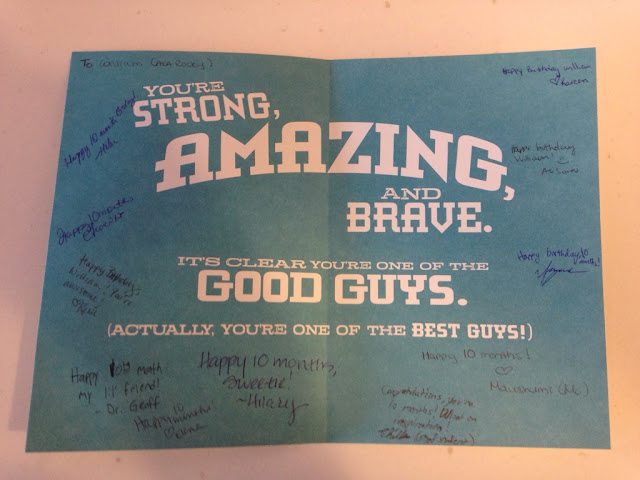 1/31 - William's viral panels from the fever the other day came back negative. The cultures were negative also except some bacteria in the trach culture so he's on Bactrim. He did have another fever this am and higher HR and they cultured again. 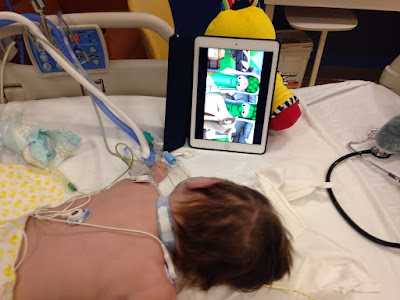 Here is the custom padding they created for putting him prone with a trach. I had done a lot of searching for trach baby prone and eventually Google image searches led back to this blog. haha. The top donut is for his face, the cutout is for the trach and the lower part if for supporting his chest and sides but allowing his belly room to hang down and then the other pad goes under his hips. 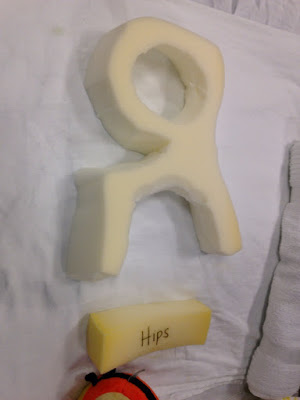