3/1 - William is doing fine. Yesterday he has a pretty good day, a visit from a guy from church and my brother and sister. My wife and I came up from 6-11:30.
All day he didn't need any PRNs but in the evening he was just miserable and couldn't get settled, kept lifting his head and turning it face down and wiggling. He seemed like he got 4 morphine and midaz PRNs while we were there and they didn't even last long before he was agitated. His temp went up fast and he was all sweaty and mad. We cooled him down with ice packs and he seemed to like it after the initial shock.

His poor nurse Peter had him and another needy kid both on droplet precautions so every time they had an issue he has to gown up and throw it away when done. He probably went through 30 gowns while we were there.

We got him somewhat settled and left around 11:30 exhausted. I hate seeing him like that.
I called an hour or so later @1:00 and peter said he had been doing better and was mostly sleeping, probably having tired himself out. When I called in the morning peter said he had a pretty good rest of the night. He was supine for trach care and a central line dressing change and did fine with it. I wished they had tried to leave him a little longer. They said his sats were 80, but 80 on his back isn't bad.

3/3 - William has been good the past day or so. They plan to put him on his back today to change the trach and GPS is going to possibly resuture his central line and his nurse is going to change his Gtube

Hopefully he will still be good shape after that and he can spend some time on his back. He needs it.

3/5 - I just got this email from his attending physician:


Mike,
Happy snow day! William has the best chest X-ray I have seen for him...and radiology agrees! I couldn't wait to tell you...

Tuesday they did put him on his back. There was a nasty cut in his neck under the trach flange. I have pictures that I sent the wound care team but they are a little gross.

He did pretty good on his back while I was there but they rounded before I left and I heard the fellow say they were weaning the Cisatracurium again. My gut was saying don't do it but I didn't protest to the fellow. I told his nurse Peter that my preference would be that he stays on his back to heal this wound and if that means going back up on the Cis then I would prefer that to putting him on his belly.

Well I called when I got home and he was on his belly. They said they tried to wean and he didn't like it and even after going back up a little bit I still decide to put him on his belly. I wasn't there but I really feel like they could've waited him out on his back especially going back up on the Cis.

Yesterday I was there and they had put him on his back for the wound nurses to see him and they treated his neck, cheeks, feet, knees. They discussed everything with the medical team and basically decided keeping on his back is a priority more so than weaning so they gave him a lot of extra medicine in the morning and early afternoon but the evening actually went better.

3/6 - I talked to the attending last night and saw the images. Her opinion was that these were the best X Rays since he has been here.

They came down on the paralytic cisatracurium to .16 (.23 a few weeks ago) William is getting used to it - last night he had some desats where he was coughing and coughing better than I have seen, getting stuff visibly out of the trach tube.
Today he has had some pretty big desats (40, 50, 25) but recovered. He's got a really good nurse, but she can't be in two places at once. I'm going to go up there soon to keep an eye on him.

3/7 - Like a million other things in the Picu its a catch 22. Kristen, the attending said he could be mobilizing secretions he otherwise couldn't before so it looks like more coughing and more secretions but it's not overall. She added some additional nebulizer treatments to thin it out.

X-rays were showing more open and darker meaning more air in them. It was also on his back when they usually aren't as good and this was better than the ones on his belly.

She did say it could be worse before it's better coming off the cisatracurium as he adjusts to a different situation. Last night had some big swings up and down.

3/9 - Last night he started the shift change off with a huge desat. He was 65 when I walked in and went to 13! before they put him prone. His heart rate was high @175 and he was mad but didn't look horrible. He came back up pretty quick but it was a little stressful. The whole thing was from pooping! He had super loud gas/loose stool.

The rest of the night was calm and today was as well until they put him on his back. He's been ok with a few 60's and 50's desats but came back up with patting his butt and chest PT and a few extra medicine doses.

Her he was more awake and smacking himself in the face.

The following is a fundraiser set up after some folks asked about doing something for the other families and kids in the PICU. We have had a number of donations of items for the kids also.
https://www.crowdrise.com/WilliamtheWarrior/fundraiser/FriendsOfWilliamTheWarrior

3/21 - Just a short update. William has been doing pretty good this past week. We had been down to .05 for the cisatracurium from .23 and in many ways I would have said this past week was one of the best since December. He's moving, seemed happy generally, no huge desats, not a lot of coughing and sats awake in the 80's and aleeping in the 90's except for one thing - fevers.

He has had a fever every shift since monday. They have done cultures 2-3 times this week with nothing found. I did find last night that he has 2 teeth about to come in. I told the fellow last night and he said hmm I hadn't thought about that. His fevers have been a little high to have teething as the only reason but we are dealing with William and he does things his own way.

Back to the cisatracurium (paralytic), they suggested instead of continuing the .01 weans per day or per shift that we try turning it off yesterday. They did and within an hour he had slipped to 70's awake and 80's asleep for his sats. He was in the 60's when unhappy and had at least 2 times in the 50's.

So far overnight he was a little better and today he's been doing good with sats. I'm hearing some 80's and 90's again.

3/22 - He's had restraints the past week or so and been a little grabby. Apparently he did disconnect the ventilator this morning.

These no no's are nicer than the old ones. They are soft and ventilated. They let him still cross his arms and put them over his head.

This evening I found two little teeth poking through on the bottom.  one is out and the other is just starting. I had a gloved finger in his mouth rubbing his gums and he bit the heck out of my finger. I thought he bit through the glove. Little rascal.

So maybe this mystery fever they can't figure out was teething. He did not have a fever tonight at 8 pm. 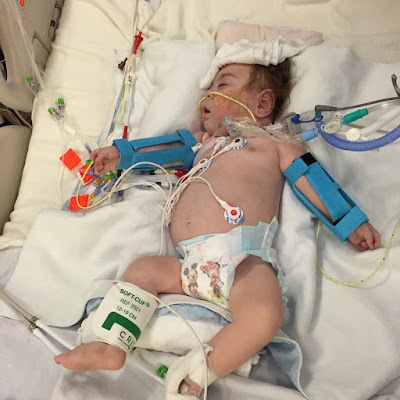 3/26 12:46 AM - I got to hang out with William as he turned EXACTLY 1 year old a year to the minute from his arrival. He is a miracle and a blessing. Happy Birthday little buddy:
Got home from the hospital at 4AM. He was unsettled for a while and would not go to sleep. They were getting cultures because of a fever, agitation and lower blood pressures today. 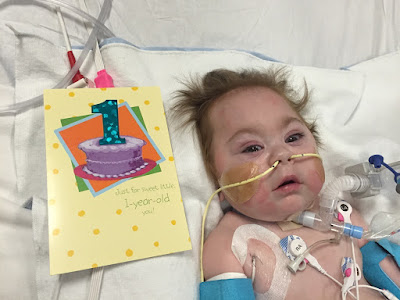 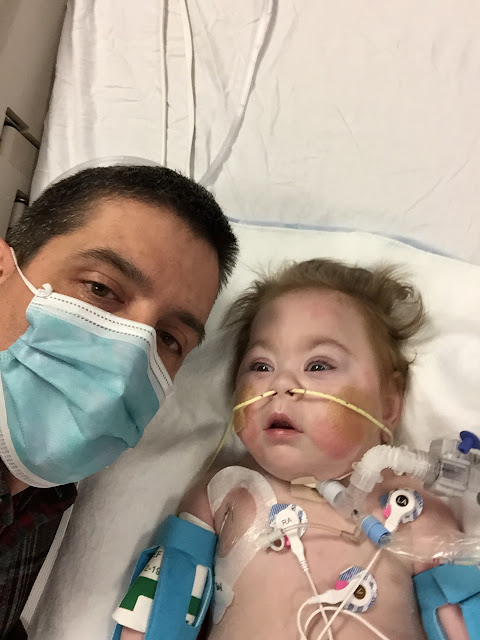 3/26 - (day) After getting some sleep myself, I spent the day with my favorite PICU patient. He's had a lot going on. Right now he is sleeping and satting good. Earlier he was just uncomfortable.
They are checking everything. Neurology was here and said he looks good from their perspective. They want to do some brain scan eeg? And maybe a cat scan, but are not real concerned.
Urology was here and he's got the hernia and they had some suggestions but no big issues.
He got an abdominal ultrasound and they are making sure he doesn't have kidney stones.
Sounds like they are starting antibiotics in anticipation of an infection. He's just been agitated and not himself the past few days and sats have been lower. 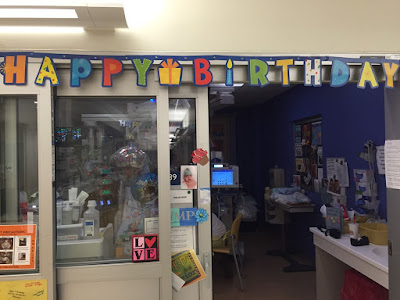 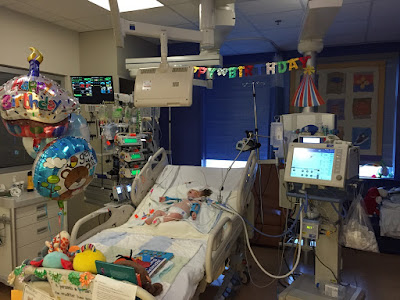 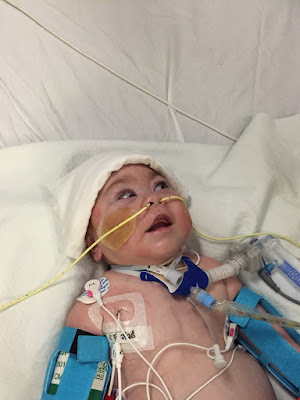 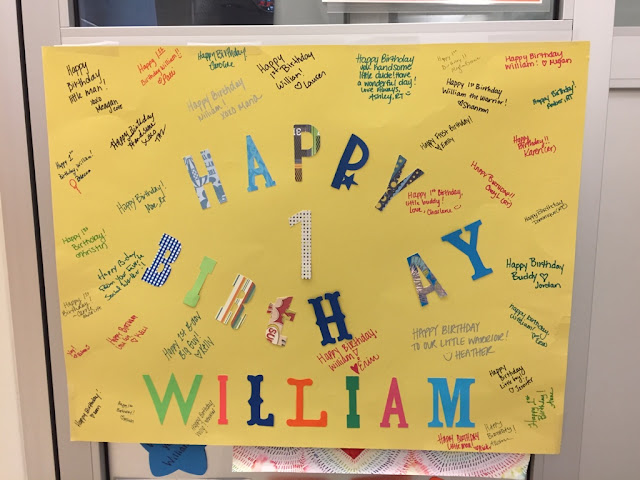 3/27 - He's still been having fevers - they cultured AGAIN overnight, they have yet to find anything, but he's just not himself overall but today for the most part hes been content - That said he had a big desat to the 20's. I talked to the attending and She said it was different with this desat in that he was off the paralytic and they were more able to see his true reaction to it, unfiltered I guess... Again they said his heart rate didn't go down so that's good. Anyway He's sleeping now, sats 80's sleeping 70's to 80's awake.
He got an EEG brain scan, no results but they were talking about a CT or MRI, but I don't know why - I think they are waiting on the EEG. Ultrasounds of the abdomen were normal.

3/29 - Had some trouble overnight desatting teens,20's and then hanging in the 40's /50's for an hour. They gave him paralytic, sedation PRNs and eventually put him prone.

He's better this morning and they went up on the vent rate and added the antibiotic back that they stopped yesterday (the 2 days on it he was better) he's on his back again.

That afternoon they called me and he has a pneumothorax and Atelectasis (some collapsed areas) the treatment is the opposite thing for each of them so they can't really treat either but he's doing fine at the moment. they did get another Xray at 4 and it looked better. It was a Supine vs Prone, but it wasn't showing the pneumothorax. He was also satting well and awake on his back.

So He seems OK, they got him back on the antibiotic for 7 days - we'll see if it helps. I suspect it will.

3/30 - called and he's having a good night for Kate his night nurse. Satting 91 and wiggling.
I'm still Leary of this idea that the pneumothorax is gone because of the supine vs prone X-rays. I hope it's fine

Last night when I was there he was wild and flailing his arms and wiping them across his face the problem was he was loosening the tape that was holding his ND tube in. At first I thought it was just a coincidence but after his nurse got it retaped he wasn't bothering it so I'm guessing either seeing it out of his periphery or feeling the tape loose was bothering him.
After all that moving his temp was 37.7 and that was the highest it was all night so no more fevers. He fell sleep after getting his diaper changed and the tape redone.