We have been using subcutaneous remodulin since December 2016. We had a 3 day stay in the PICU to transition. Ironically 2 weeks later on Christmas eve 2016 we were back in the PICU for our third Christmas in a row with a double lumen central line infection. That was treated for 10 days and the central line was removed 1/3/2017.

There is a pretty responsive Facebook group called " families of children with pulmonary hypertension" that is a good resource for families with questions.

I think the problem that comes up so often is "Is this site still OK?" and it's tough sometimes to decide to change it because it's 3-5 days of pain and sensitivity and irritability. We have done 4 sites so far, the current one being on his lower back, but to the far right near the flank. I wasn't sure if that was going to work OK, but so far so good, but with a code brown and a GI bug, sometimes it requires some TLC. I have some ideas though. For instance, the site on his back, I have the tubing looping once around the site, exiting the tegaderm at the 9:00 position and then going across his back secured with another IV300 as a stress relief. What I should have done was have the tubing loop around the site and exit at the 12:00 position to keep it farther away from the poop zone.  Pic: 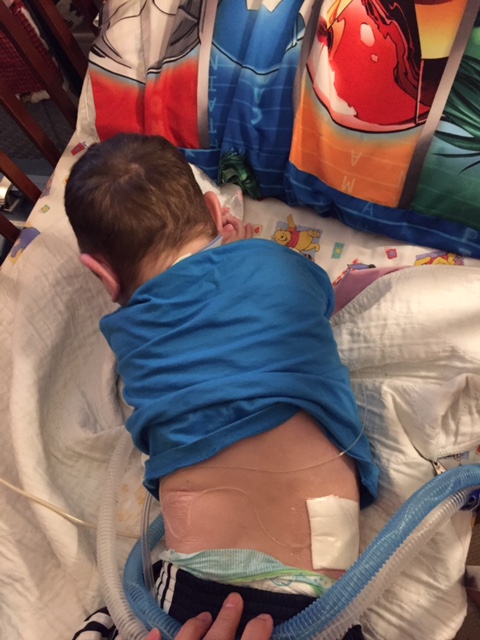 Here is a more recent picture with the just the Cleo 90 with the extra IV3000 over it. You can also see the marks where the tubing was run across his back and then a stress relief loop: 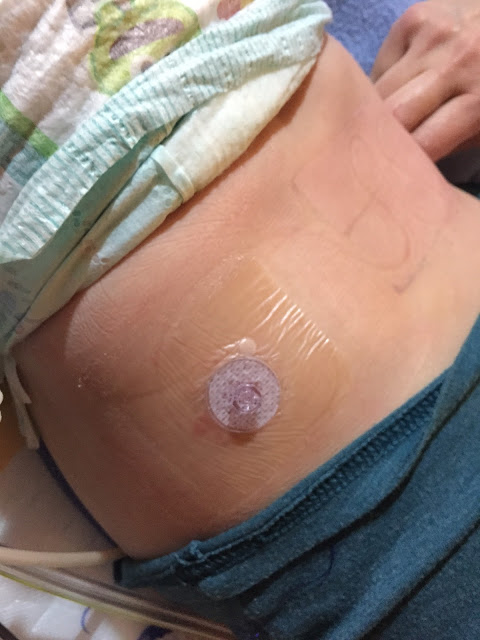 I want to try using the silhouette catheter/sites and we are supposed to be getting training on those soon.

These are good to have:  Cavilon-No-sting-Barrier-Wipes
I can get them from pharmaquip, I think they are better than the Kendall skin barrier wipes, but using that is essential to the site lasting and staying in place.

We had less luck with the Accredo trained method of Cleo 90, then covering with gauze and the tegaderm/IV3000 over that. It was too much of a pain to get to it without pulling out the site or pulling on the tubing. The basic method we adopted for the back of the arms was to prep the site with the numbing cream, wait 30-45 min, clean with alcohol, skin prep, place the cleo 90, hold for 30- 40 seconds, release carefully. Once the cannula is in, we take a IV3000  (~2”x3”) fold in half and cut out a diamond hole in the middle just big enough to go over the Cleo and put that on as an extra securement, but it’s clear so you can see what’s going on. Next we put on the tubing set, and loop the tube once around the site, over this I fold up a 4x4 gauze. Next we use a type of tubular dressing, either spandage or tubigrip. I cut a piece to fit from the elbow to armpit, fold it in half, pull it up like a sleeve and with my third hand hold the tubing in place and the folded 4x4 gauze, pull the tubular dressing over the gauze to keep it in place. With the spandage, a few times we just used that by itself and kept long sleeve shirts on him. The problem is there is little protection if he gets his fingers in there. The other thing we have done is wrap Coban tape over the tubular dressing, being mindful to not wrap it too tight, but tight enough to keep it protected. One additional protection we do is run the tubing down his back and secure it in 2 places with tape or IV3000 as additional sacrificial stress relief points. Here is a site on the arm like that: 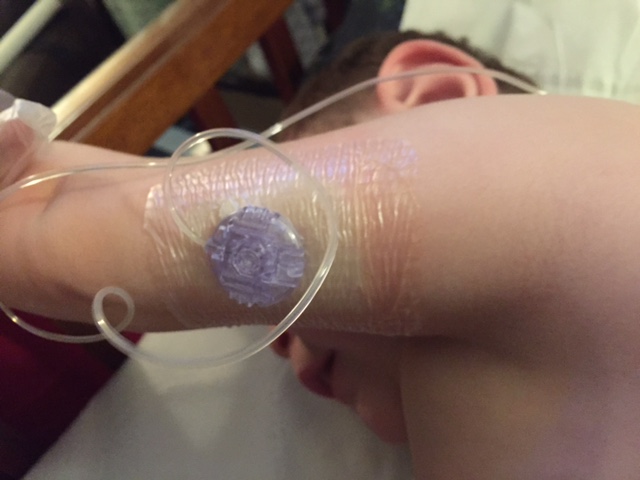 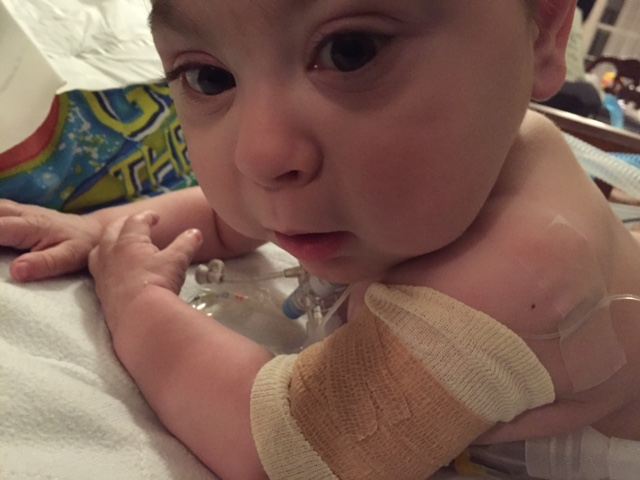 Our original site was on the right arm. We lost that one I think because he got his hands on it and pulled the IV3000 off (this was when we were doing the Accredo trained Cleo, gauze, IV3000 only method) and the cannula was out of the skin and the adhesive lifted – it lasted 3-4 weeks. The second site was Left arm, pictured above. That one lasted 4 weeks and we noticed the dressing all in one day started coming up, so I thought maybe we could remove the IV3000 and re secure it. The site was leaking and red and burned the skin and left white crusty deposits on the skin. Pic: 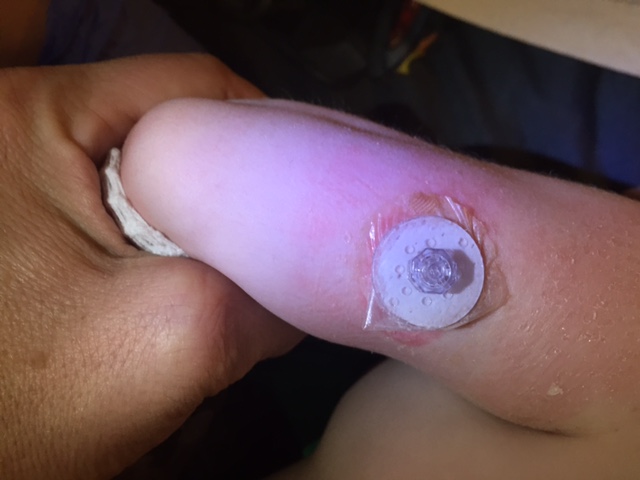 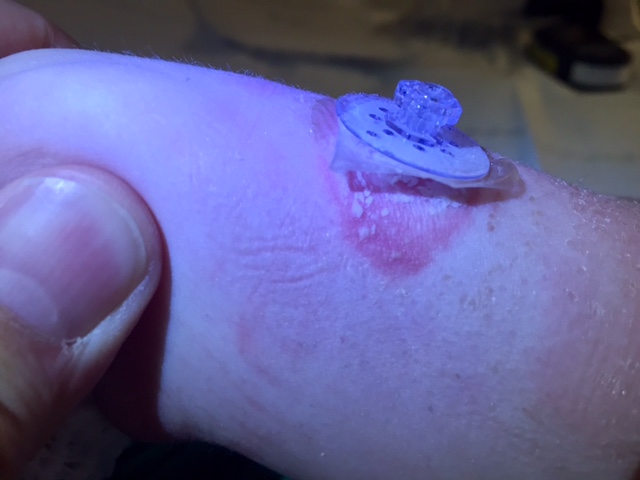 The 3rd site we went back to the right arm and this one only lasted a week or 2 and was bleeding, red and leaking. It looked flat to the skin like the cannula was still in place so I gave it one more day and then decided to try taking the IV3000 off and cleaning around the Cleo, but as soon as I got that off I could see the cleo adhesive was not adhered and it smelled bad. I looked under the cleo and it was oozing yucky pus like material so I started prepping the 4th site and considered upper back because someone on the families of children w/PH facebook said he had success with that. I decided no because William is pretty muscled up there. We thought about the thigh, but felt like diaper zone and access to his hands was maybe not best so I tried the lower back flank area. Bleeding site pic: 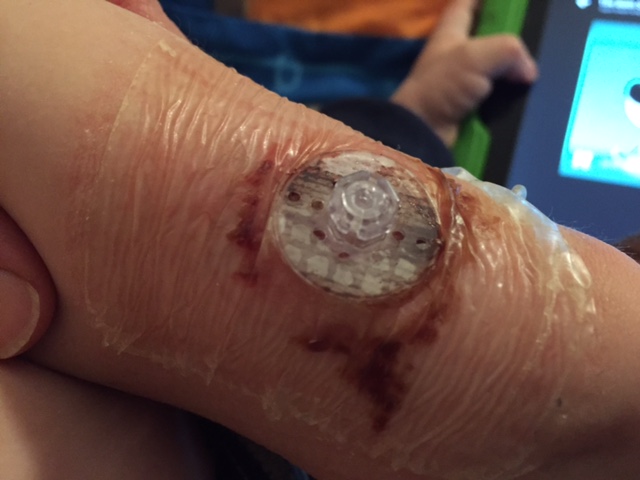 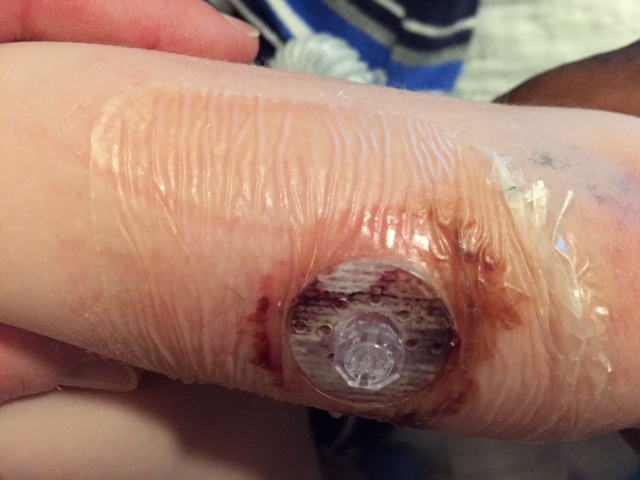 I could not do a tubular dressing, so…I modified my method and the Acreedo method. I applied the numbing cream, wiped off with alcohol, skin prep, placed the cannula and it failed to stick and pulled out. I tried again and it worked. I still used an IV3000 with the diamond hole cut, but I cut down the overall size to about 1.5”x2”. After that was in place, I folded a 4x4 gauze to cover the IV3000 and the tubing and used a big 4”x4” piece of tegaderm. Once it sticks, you are stuck with that position, so I also cut a few 1”x4” strips to secure the edges if there is not at least ½” of tegaderm bordering the folded gauze. As in the pic, we then run the tubing to the other side, make a stress relief “U” in the tubing and secure with an IV3000.

What else?
We don’t always change the tubing set every 3 days. I  would say I change it every other pump/syringe change but I think we have let it go 3 changes. Justification – It’s not IV and we are not in the PICU with scary germs. With the arm sites, we tried to peek at the site every day and get a good look and rewrap it every other day. With the back, I decided to look at it every other day or if soiled, and change the tubing every 6 days. So far the back site has looked great. We changed the dressing after a big blow out poop mainly because the line got soiled and the line is the path under the tegaderm
We usually give Tylenol around the clock for a few days following a site change and also Benadryl.
Some days I miss IV. I know there is greater risk but in some ways it seemed easier. Possibly it was familiarity. I don’t miss the big pump or the longer mixing procedure every 48 hours.
The belt clip case that Accredo provides will easily break, the stress points on the pivot for the clamp are plastic and they just break off. We are on our third one. We did find another case and belt from Etsy we have been using. We have a chest strap/belt we got for his vent tubing so usually we put the case on that belt, not the one I got with the pump, but here are the links:
PUMP CASE  - The T:slim fits the Cadd ms 3 pump.

BELT -  The belt for the case 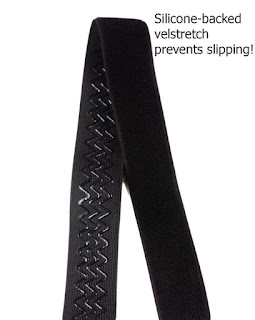 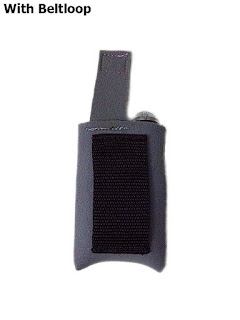 Ventilator Securement band – This is the vent holder belt. I got her to add some elastic to it so it fit better and had some give to it. It’s nice because when he pulls on the circuit it pulls from the belt first, and not his trach right away. We have been using this with the pump case also.